When Java Moose opened its first cafe and roastery at Saint John's McAllister Place mall in 1996, it already had something to boast about: It was likely the only coffee company in the world to roast beans in an enclosed shopping centre.

The mall roasting didn't last long, but the coffee company now has four retail locations, hundreds of wholesale clients across the country, and its own innovative, fully recyclable coffee pods for Keurig machines.

The Saint John-based company has grown steadily and organically by focusing on the shifting needs of its customer base, says Randy Pedersen, who co-founded it with Glen McLean nearly 20 years ago. "Java Moose is a community more than a company," he says.

Over nearly two decades, as Tim Hortons expanded and Starbucks began encroaching on the Maritime city, Java Moose has endured as a regional favourite. It has done so, in part, by expanding into wholesaling and manufacturing while staying true to its core business: delivering a fine cup of coffee every time.

Diversifying revenue streams is something most small businesses consider, though not every entrepreneur succeeds. Pulling it off requires focus and endurance.

Mr. Pedersen and Mr. McLean saw the wholesale opportunity early on and began selling their coffee to restaurants, offices and bed and breakfasts. They soon had dozens, then hundreds, of clients.

This year the company developed fully recyclable, single-cup coffee pods made out of recyclable P5 plastic. It was a way to reduce the waste generated by new brewing methods. The company manufactures the pods in Saint John and sells them in local shops and Sobeys supermarkets throughout New Brunswick.

Mr. Pedersen and Mr. McLean "have been really strategic in terms of their planning," says Sarah Adams, vice-president for small business at Royal Bank of Canada. Staying focused on Java Moose's core business – great coffee – worked, she says, as they took on additional business streams.

"They really had to think carefully around their decision to expand and add locations, because they really wanted to stay true to their value proposition and the quality and consistency of their product," Ms. Adams says. "They didn't want to lose that as they were growing."

Multiple streams of revenue can even out profits, and they really help if a business is cyclical in nature. "By diversifying, you're adding cash flow when business might be slow, or maybe you're adding value to an existing product and service that will make it more attractive and increase sales," Ms. Adams says.

Managing those new lines of business can be a struggle, however. Making a business plan will help – not only to justify expansion but to monitor progress and ensure entrepreneurs haven't gotten in over their heads.

"Sometimes it might be nice to have the complementary product, but it may be that you need a lot more resources or you need more people or capability than you may or may not have planned for," she says.

Daniel Doiron, a business professor who has built and run four companies and teaches strategic business management at the University of New Brunswick in Saint John, echoes her sentiment. "You have to make sure you have people surrounding you who can effectively run the business while you're diversifying," he says.

Mr. Doiron also warns of the perils of expanding too fast, especially when it comes to distribution. Working regionally can be manageable, but expanding on a national scale can turn an enterprise into a distribution business, not a product one.

The capital and marketing expertise required can be overwhelming. He points to the problem small breweries face: "The distribution of beer is a big, ugly business, controlled by big guys with economies of scale," Mr. Doiron says. "Little guys generally fail at managing that."

By working within its supply chain, Java Moose "is sticking to their knitting, which is an important part in early diversification," Mr. Doiron says. He recommends that companies considering broader distribution take it slowly.

Java Moose has been fielding calls about its coffee pods from across Atlantic Canada, where the company already has a distribution network for its other coffee products. "We're not quite in full production yet, but we're hoping to get there," Mr. Pedersen says.

Pods are, after all, in big demand now, and Java Moose is innovating its design. "We're led by our customers – led by how people want to buy our coffee," Mr. Pedersen says. Adding more ways to get coffee to people, he says, "helps us bring the Java Moose coffee experience to more Canadians."

Can crowdfunding work for restaurants?
October 23, 2015 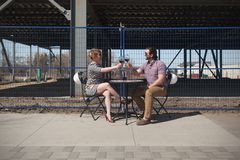