In the early days of his business career, Jack Grushcow had a brilliant stroke of timing.

He founded a Vancouver software company that pioneered e-mail, a venture that was noticed and taken over by software giant Microsoft Corp., which popularized the concept through the Outlook system familiar to computer users the world over.

Mr. Grushcow, having already proved his acumen as a business visionary, is making a second attempt at a breakthrough. This time, he says to forget about software. The next big thing will be plants. He's hot on the trail of genetically modified crops able to replace the petroleum used to make plastic and engine oils.

His company, Linnaeus Plant Sciences, expects to be testing genetically modified plants within a year. Between getting the plants to grow, full regulatory licensing and commercial introduction, the entire process could take five or more years. But Mr. Grushcow is optimistic that designer plants will pay off.

Plants are "like the philosopher's stone, if you imagine water and sunshine and being able to synthesize almost every chemical you use," Mr. Grushcow says. "To me, it's incredibly appealing."

To date, most of the effort to use plants as petroleum substitutes has been done through the bio-fuels craze of turning corn, soybeans and sugar cane into gasoline or diesel.

Mr. Grushcow has chosen a different fork. Instead of fuels, he says plants should be used as feedstocks to knock off high-end uses for petroleum, including polymers for plastics and nylon. Other possibilities are engine and hydraulic oils.

A trip to a gas station illustrates the allure of the strategy. Consumers might complain about $1 a litre gasoline, but it's dirt cheap compared with engine oils at more than $4, and synthetic oils that are pricier still. "When you burn [crops as fuel] let's face it, that's pretty well the bottom of the heap when it come to value," Mr. Grushcow contends. Biofuel "makes no sense."

Linnaeus is currently trying to modify camelina, a non-food oilseed from the mustard family, by inserting genetics from the castor plant. Castor seeds yield a highly valuable oil able to duplicate many high-end uses of petroleum, but the plants have the drawbacks of a limited supply and the fact they contain ricin, a deadly poison.

Linnaeus is hoping to get some of the qualities of castor oil from camelina, which is beginning to attract interest among farmers because it's drought tolerant, it's suitable for marginal agricultural land, and it's a sparse fertilizer user, among other attributes.

French chemical giant Atofina is helping Linnaeus bankroll some of its research, in return for an extra supply of castor-like oil for making a plant-based nylon.

Other companies are looking at camelina too, but as another potential source of biodiesel rather than as a feedstock. Mr. Grushcow's approach is definitely going against the grain of major players in the industry.

"With more than 12 years of experience working with camelina, exclusive access to the majority of the world's camelina germplasm, and a wealth of intellectual property around the genetic modification of the crop, we have chosen to focus our company's efforts on camelina's use as a sustainable, next generation biofuel," says Sam Huttenbauer III, the CEO of Great Plains Oil & Exploration, a Cincinnati-based company.

Much of the impetus for using plants as fuels comes from government mandates stipulating that they be added to gasoline or diesel. JoAnne Buth, president of the Canola Council of Canada, says conversion to fuel provides a stable, guaranteed market for crops.

Linnaeus has a staff of four, with its research office at the National Research Council's Plant Biotech Institute in Saskatoon, although it also has other laboratories doing work for it on contract.

While waiting for the hoped-for payoff on its camelina seeds, Linnaeus is trying to develop greater acceptance for plant-derived oils by selling hydraulic fluids made from canola.

Although hydraulic fluids aren't a household name, they're key to running many types of machinery, with 60 million litres sold annually in everything from fork lifts to road graders. Compactors use 20 to 30 litres each. Hydraulic fluids often leak out of equipment, but Linnaeus's oils are biodegradable and don't pollute groundwater, as do those made from petroleum, an environmental benefit that helps offset a price about 50-per-cent above conventional oils.

"To me the hydraulic opportunity is the tip of the iceberg, but it's the first step in a longer term process," Mr. Grushcow says.

Linnaeus is 100 per cent owned by Mr. Grushcow, who has been working on plant research since the mid 1990s, indicating the difficulty of taking ideas from conception to commercialization.

Mr. Grushcow said the early days of selling the world e-mail in the 1980s were challenging too, and his employees nicknamed him Willy Loman, the fictional tragic hero of Death of a Salesman fame, following some of his marketing trips

After "a week of trying to sell this stuff," he remembers being "kind of beaten up for it." One bank executive, whom he tried to convince that e-mail would be the next big thing, told him: "'Why would I use e-mail? If I want to talk to Joe, I just stick a Post-It note on his door and he calls me.'"

Microsoft bought Mr. Grushcow's Consumers Software Inc. for an amount reported to exceed $15-million in 1991. For the past 15 years, Mr. Grushcow has been pouring money into plants, betting that, as a cash infusion did with e-mail, having farmers replace petroleum production will eventually pan out.

"Nobody has the patience to be an investor or a venture capitalist in a company like mine because the time horizons are so long. But we're building significant platforms for petroleum substitution, so I don't mind being patient," he says.

It's time for the next generation of biofuel
February 16, 2010 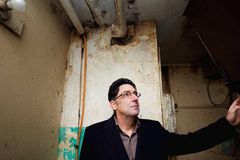