Leslie Wulf sees a sector that needs to grow up in a hurry when he looks at Canada's daycare industry.

Unlike countries such as the United States and Britain, where the market is dominated by a few players, Canada's daycare centres are largely small and privately owned, and often non-profit.

The five largest companies operate a mere 1 per cent of the market, leaving the door open for a well-financed player to consolidate the industry and build identical centres from coast-to-coast to house finger-painting children and tantrum-throwing toddlers while their parents spend their days at work.

If recent history is any guide, the rewards would be great. Bright Family Horizons Family Solutions, which provides daycare services to large corporations in the United States, sold for $1.3-billion (U.S.) last year. The year before, U.S.-based Learning Care Group, which has more than 100,000 daycare spaces, sold a 65-per-cent stake for $700-million.

"Canada is full of mom-and-pop shops and companies set up by a couple of real estate buddies," said Mr. Wulf, chief executive officer of Calgary-based Edleun Group Inc. "It's not going to be like that any more. It's hugely capital intensive and you need economies of scale to operate effectively. "

Edleun raised $40-million (Canadian) earlier this year after obtaining a listing on the TSX Venture Exchange, and it has already spent $20-million to expand its number of daycare centres to 20 from 11 since the spring, all of them based in Alberta. The business model is deceptively simple: build or buy daycares and fill them with children, each of whom provides a steady stream of income.

The company has no debt and with $22-million in cash reported at the end of its last quarter it is eager to expand out Alberta – it has targeted more than 280 other centres it would like to buy. It will likely accelerate those plans by taking out mortgages on the existing 20 centres, Mr. Wulf said.

If it meets its goal, Edleun will command 10 per cent of the Canadian market.

Before it can attempt to consolidate an industry traditionally managed by the state, the company must dispel the perception it is looking to profit at the expense of children. Unlike most Western countries, about 80 per cent of Canada's child-care centres are not-for-profit. And in Ontario, funding regulations in several large municipalities restrict how much money can go to privately owned centres.

Numbers on profits aren't available in Canada because most centres are small and the municipalities that host them don't keep data. Doug Hyatt, a business professor at the Rotman School of Management at the University of Toronto, said there may be rules about how many children to adults and maximum capacity, but that doesn't tell the whole story.

"What really matters is seeing how workers interact with kids," he said. "You need to see if workers get down on their hands and needs to interact with kids, and other intangible things you just can't measure. In Canada, it's just difficult to assess the industry."

Advocates such as Martha Friendly, co-ordinator of the Toronto-based Childcare Resource and Research Unit, a policy and research oriented facility focusing on early childhood education and child care, have voiced concerns that a company beholden to its shareholders can't offer proper care and make a profit at the same time. They see parallels to Australia's system if companies such as Edleun are allowed to expand.

"You can't make money offering quality child care," Ms. Friendly said, citing studies that suggest non-profits provide better levels of care. "A public company exists to make money, so there is perhaps an incentive to cut corners on things such as quality staff."

Prof. Hyatt said his research tends to indicate private daycares will proliferate in Canada as they have in other countries.

"Consolidation is a common business model that you see in every industry – you see it everything from dentistry to auto dealerships," he said. "Mom and Pa get old and they need to move on. People use informal child-care arrangements to get by, but it's problematic and there's a need here to be filled."

In most provinces, the government helps parents defray the cost of daycare through subsidies and tax breaks. Parents will choose the best daycare, Mr. Wulf said, regardless of ownership structure.

His centres – which can house up to 230 children aged six weeks to 12 years old – are highly standardized and offer the same programs and menus (created by a nutritionist) regardless of where they are located.

They are also expensive to open. To build from scratch could cost up to $4.5-million, he said, putting it out of reach for the smaller entrepreneurs who once dominated the industry.

"These people want to retire, they want to sell their buildings," Mr. Wulf said. "We can build new, or we can renovate them up to our standards. But it's not an inexpensive process, we've spent more remodelling some of our buildings than their owners did to put them up." 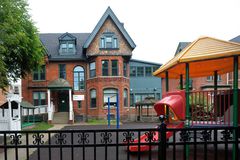 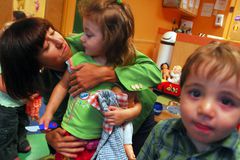