Want to monitor your teenage son's driving speed, or track your mileage and gas for work? Jay Giraud has the tool for you.

As CEO of Vancouver-based Mojio, he produces a small Internet-connected device that plugs into your car's diagnostic port (usually just under the steering wheel). It beams your vehicle and driving information into the cloud and allows you to personalize your driving experience by running a variety of apps on your smartphone.

"The basic premise of Mojio is that people want their cars to be more like their smartphones," says Mr. Giraud.

It's still early days for Mojio, which sells for $169 and includes a year's subscription to an always-active 3G Internet connection. The product launched on Amazon, as well as the company's own website, in November of last year with three apps. "So far we're attracting mainly early adopters," says Mr. Giraud. "The kind of people who would have the latest smartwatch."

Mojio will release another 12 to 15 apps this fall, and currently has 800 developers building apps on the platform. "We've hosted and participated in hackathons with Microsoft, BMW and Concur, as well as Hertz and AT&T," says Mr. Giraud. And the company has some serious money behind it, with funding from Telekom Capital, Relay Ventures and BDC (the Business Development Bank of Canada).

They're all betting that the auto industry is ripe for a change. "Some of our app developers work for big companies in the automotive industry," he says. "But they're frustrated with the inability to work with an automaker to connect their app or service. Automakers are very, very protective of their customers, but that's not giving customers what they want."

Mojio is one of many high tech Canadian startups seeking to disrupt the status quo in the auto industry. From Toronto's KeyFree Technologies (which seeks to transfer the role of the car key to your smartphone) to New Brunswick's AutoPulse (which sends information about your car to your service station), they're coming up with innovative new products that alter drivers' relationship with their vehicle.

Automotive companies have been no slouch at innovation over the years, points out Don Linsdell, Canadian automotive leader for EY. Think the assembly line, the three-point seatbelt, air bags, and lane departure and blind spot warnings to name just a few. Still, the pace of change for vehicle technology is moving at warp speed.

"The big trend is toward connectivity," says Mr. Linsdell. "And that's not just how the passenger interacts with the car, but how the car interacts with other parties, whether it be vehicles, the manufacturer or the insurer."

Automobile manufacturers, he says, have been struggling to keep up in this brave new world. "I think ownership of their relationship with the customer will be a challenge going forward," Mr. Linsdell adds.

He says the question of the day is: "Who will own that relationship? Will it be the automobile manufacturer, the technology company or the app designer?"

Shiva Bhardwaj certainly wants a slice of the pie. As founder and CEO of Toronto-based Ansik Inc., he's seeking to reinvent the automotive service experience.

Mr. Bhardwaj, who graduated with a degree in electrical engineering from the University of Waterloo, spent summers working in his dad's mechanic shop and came up with his first product after watching one of the technicians get hit in the head with the hood of a car while doing maintenance work.

"There was blood everywhere," he says.

So he invented the ShockLock, a safety device for mechanics designed to keep car hoods up while they work. Mr. Bhardwaj sold out of the first 400 devices within two months, and another 2,000 units have been ordered.

"You have to understand, this is a legacy industry," he says. "There are a lot of inefficiencies because engineers and people building technology never sit behind a desk at a service station."

His latest solution for the industry is more hightech focused. Called PitStop, it creates a link between service stations and customers with the use of a diagnostic plug-in and a smartphone app. PitStop diagnoses car problems before they happen and allows service stations to send out maintenance notices, quotes and coupons to customers.

The units sell for $50 to dealers and service stations, and Ansik gets an extra $10 every time a customer gets referred back to the dealer. With seed funding from the Techstars startup accelerator program, Mr. Bhardwaj is now running a pilot program at four large dealerships in Michigan and has met with Ford and Magna, among others.

Another promising entry to the field: Waterloo-based NeverFrost Inc., which had its genesis as a fourth-year engineering design project. Its founders – all University of Waterloo students – rued the nippy winter task of chipping ice off their car windows.

So they used nanotechnology to create a transparent film for vehicle windows that prevents frost from building up, blocks UV rays in hot months and protects against flying stones and other hazards. The company is piloting its product right now on large fleet-driven businesses – "mostly large trucking companies," explains co-founder Khanjan Desai.

For them, he says, a broken windshield and higher air conditioning usage results in real costs, so NeverFrost is an easy sell in terms of return on investment. "Last week we got a call from a customer in Alberta," Mr. Desai says. "A large piece of rock hit his windshield." Although it made "the loudest sound he'd ever heard, the windshield was just fine."

In the meantime, NeverFrost aims to scale up its manufacturing capability with the help of angel investors from Canada and Silicon Valley. "We hope to do a limited trial release in the consumer space this fall," says Mr. Desai.

Waterloo startup wants to make the ice scraper obsolete
May 12, 2018 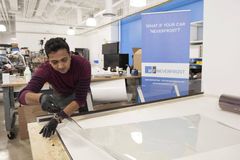 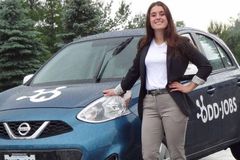