Soft-serve, the often overlooked ice cream, is in the midst of a makeover.

It's being dipped in melted Belgian chocolate flavours, like key lime pie and white chocolate Oreo, before being slathered in toppings as the coatings harden.

It's being stuffed into cone-shaped pastries, layered on top of toasted rice, topped with cotton candy and rolled in popular breakfast cereals.

Consumer demand, so far, has been fuelling that growth but with the winter months approaching, it's up to the shops to sustain demand as temperatures dip — and to ensure soft-serve isn't just another passing food fad.

"The ice-cream business is very popular," said Sam Arif, co-founder of La Diperie, a soft-serve chain that started in Montreal.

At La Diperie, there is only one flavour of soft-serve (vanilla) but patrons can choose to dunk the cone into one of dozens of flavoured chocolate sauces and finish it off with various toppings.

Since Arif opened his first shop in Montreal in 2014, it's grown to five locations, including a Toronto shop that opened earlier this summer. La Diperie's next stop will be Vancouver, he said, as part of a plan to expand to each major Canadian city.

One of his competitors, Sweet Jesus, grew from a pop-up shop about 2.5 years ago to three Toronto stores and one in Ottawa that opened last weekend.

Owner Andrew Richmond doesn't know where he'll open his next spot, but said the company is working towards a franchise model because there's been abundant interest from people wanting to partner up.

"Ice cream is a category that makes people smile," said Ann Stone, a lecturer at the University of British Columbia's Sauder School of Business who was once in charge of Dairy Queen's mall business.

About 90 per cent of Canadians surveyed by market research firm Mintel said they eat ice cream during warm months, according to the company's most recent report on the frozen treat and other icy novelties in Canada.

"And they're making it even more fun," she said, by allowing customers to take a favourite treat and have fun with it via exotic and creative flavours and toppings.

But innovation alone is not enough. Food fads, like frozen yogurt bars, can come and go — sometimes with a life span of only a few years, Stone said.

"Everybody can put rum-soaked blueberries into some sort of lactose-based thing," Stone said.

"If you only have innovation, you might be just a fad and go," he said, adding he also emphasizes quality, value and consistency at La Diperie.

Stone said that one of the things that sets a business apart is how well it can become part of the fabric of the local community.

A shop can do that virtually, she said, by having a massive and active social media following. Sweet Jesus, for example, has nearly 63,000 Instagram followers. The company also boasts an aptly named Snapchat "confessional" in its newest Toronto location.

Stores can connect with their communities in more traditional ways as well, Stone said, perhaps by offering discounts to a local kids' sports team after games or hosting various community group meetings. La Diperie involves the community by naming some of its pre-made cone combinations after frequent customers, said co-founder Francisco Landaeta.

That's the type of customer-friendly savvy that can make a business "beloved and sustainable," she said.

It can also guard against the perceived seasonal nature of the ice-cream industry — although Stone points out that's actually less of an issue than might be assumed given grocery stores do sell frozen treats year-round. If a local business is beloved, loyal customers will still visit during the colder months, she said.

Some businesses also diversify their menus and add hotter elements to accompany the ice cream.

Sweet Jesus doubles as an espresso bar at all but one location, Richmond said, even serving affogatos — an ice cream-and-coffee concoction.

La Diperie will remain open for the first time this winter, Arif said, and the chain will launch some new products to serve during that time, including a variety of hot drinks. 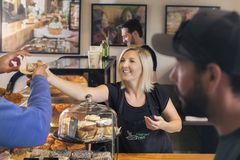 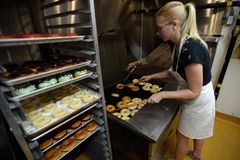