Yvonne Felix has had vision problems since she was four years old. At age seven, she was diagnosed with Stargardt disease – a form of juvenile macular degeneration – after being hit by a car.

For much of her life, Ms. Felix, now 34, has lived with a blind spot that covers 98 per cent of her field of vision. Stargardt's runs in her family – her brother and sister have it too.

Two years ago, she was approached by eSight, a Toronto-based startup that makes electronic glasses for people with low vision. She doubted the device could do anything for her, but within seconds, she was proven wrong.

The glasses use high-definition cameras to beam images to the peripheral vision, which is often still functioning for many people with low vision. Ms. Felix found much of her sight restored, almost magically.

"The video of me trying them is online and people have said, 'Why aren't you excited or crying?' I'm like, 'Because it was like cutting off a limb,' " she says. "That blind spot had been there most of my life and now it was gone. I was in shock."

ESight is among a wave of fast-growing wearable technology companies that are changing the lives of people with disabilities. While high-profile mainstream flops such as Google Glass and some smartwatches have done much to deflate the hype machine that once drove "wearables," niche devices targeted at disabled people are indeed proving to be life-altering for users.

Ms. Felix, who had spent 20 years volunteering for vision-oriented organizations including the Canadian National Institute for the Blind, was so won over by eSight's restorative capabilities that she went to work for the company. She now serves as user community co-ordinator, answering questions from customers on how to use the glasses.

Telecom industry veteran Conrad Lewis, who suffered from vision loss himself, founded the company in Kanata, Ont., in 2006. ESight began a limited launch of the glasses in 2013 and is now ramping up for a bigger rollout. With 25 employees and $18-million in funding from private investors so far, the company is eyeing an initial public offering to help tackle a potential North American market of more than three million people with low vision.

ESight is hoping to follow a similar trajectory as Ekso Bionics, the Berkeley, Calif.-based startup that raised $20-million (U.S.) in an initial public offering last year. The company makes bionic exoskeleton suits that help paraplegics and stroke victims regain the ability to walk.

The suits' origins go back more than 20 years to a project at the University of California at Berkeley. Ekso co-founder and chief executive officer Nathan Harding recalls how intimidating the big, hulking monstrosities were at the time: "They were these giant gorillas that looked kind of like the Sigourney Weaver Aliens thing."

Mr. Harding, a mechanical engineer with an interest in robotics, joined the project in 2003. After shrinking the suits down to a manageable size, he sold them to a U.S. military contractor as the suitably named HULC, or Human Universal Load Carrier. The powered, robotic exoskeletons let troops comfortably haul up to 90 kilograms of heavy gear.

The company began to shift toward medical applications after doctors showed Mr. Harding and his team videos of paraplegic rehabilitation. Existing methods, which used non-robotic mechanical rigs, forced users to walk in a stiff, Frankenstein-like manner with considerable exertion.

"When we saw that, we knew we could really help people," Mr. Harding says.

The company shipped its first commercial system in 2012 and is now in nearly 100 rehabilitation centres around the world, including four in Canada. The company employs about 90 people.

The suits absorb users' body weight so that leg muscles can be reactivated without significant pain or discomfort. While the technology works best with individuals who have suffered recent injuries, Ekso is also reporting promising results with chronic victims, or those who have been paralyzed for some time.

The exoskeletons cost between $100,000 and $150,000, but Mr. Harding expects they can eventually come down to around the price of a car while improving in functionality and size.

Price is indeed often an issue in wearables aimed at disabled users – eSight glasses cost $15,000, for example – because they typically sell to fewer buyers. Smartwatches and fitness trackers such as FitBits sell for a few hundred dollars because they have hundreds of millions of potential buyers, but disabled-oriented wearables cater to niches in almost every case.

They also often require a high-degree of customizability to suit each individual user's needs, rather than the one-size-fits-all nature of most mass market products, which also raises costs.

Wearable makers must therefore learn how to get around these issues by building base hardware products that can be customized and improved via software, which is usually cheaper to develop.

"You can outsource quite a bit of the hardware to the people who make it and focus on making the rest of the device usable and what to do with the data that it generates," says Arshya Vahabzadeh, a physician at Massachusetts General Hospital and chairman of the Council on Communications of the American Psychiatric Association.

Toronto-based Neutun Labs is doing exactly that by focusing specifically on software for the same smartwatches that have so far failed to take off with mainstream buyers.

Neutun's app uses a smartwatch's accelerometer to detect the shaking that signals epileptic seizures. If the watch believes a seizure is happening, the wearer is asked to respond to an on-screen prompt. If no answer is received within a few seconds, notifications are sent to preset contacts and the watch displays relevant health information for emergency responders.

Neutun, which has office space and funding from the Dreamit accelerator program in Philadelphia, is offering the app for free on Pebble smartwatches for now, with launches on Apple Watch and Android Wear imminent. The company plans to ultimately charge monthly subscription fees, once additional features are developed and added.

The ability to design such software is only possible now because hardware makers are creating sensor-laden smartwatches that are open to third-party software developers. 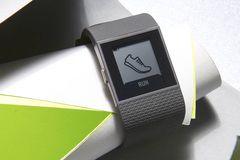