Assassin's Creed is one of the best-selling video game series of all time. With more than 93 million copies sold, it has generated billions of dollars in revenue for French video game giant Ubisoft and led to a feature film.

But the creator of the series won't be making his next game for a big studio.

Instead, Patrice Désilets has gone independent, opening a small studio in Montreal called Panache Digital Games. While Mr. Désilets has a team of only 24 people, he wants to make games that will compete with those coming from the largest publishers.

Mr. Désilets is just one of a growing number of "indie" developers who are making games that look just as polished as those made by major studios, known in the industry as AAA games. Many of those developers have backgrounds in AAA.

For Mr. Désilets, opening his own studio was a chance to maintain creative control and keep the profits from his creations in Quebec.

"The big studios, they make big games in Montreal but most of the real money goes back to the headquarters in a different country," he says. "The studio in Montreal is basically just a cost centre."

Being independent allows developers to take more risks, Mr. Désilets says. His studio's first game, Ancestors: The Humankind Odyssey, will share some stylistic elements with games he has made in the past, but it will have a broader scope than anything he has worked on before.

The episodic game will follow the evolution of the human species over a five-million-year period, with players re-enacting events ranging from the invention of the first tools, to the moon landing. The game will also take a different approach to violence from some of Mr. Désilets's previous work. In many episodes, players will have to find non-violent solutions to the challenges presented to them.

It's an ambitious – and risky – project, one that a major studio would be unlikely to back. But the freedom to take such risks is one reason the number of indie developers across the country is growing.

In 2015, the country had 472 active game studios, according to a report prepared for the Entertainment Software Association of Canada. In 2013, there were only 329. The majority of these studios employ fewer than 100 people.

Almost 30 per cent of Canada's game studios are in Quebec. Another 27 per cent are in British Columbia.

In Quebec, the number of indie studios has grown rapidly over the past six years, says Guillaume Provost, the founder of Compulsion Games, a Montreal-based studio that's currently developing its second game. Mr. Provost is also vice-president at Alliance Numérique, an association of video game and other new media companies in Quebec.

Mr. Provost says there are two major factors driving the increase in the number of independent game developers.

In 2010, the Canadian Media Fund, a non-profit organization that receives financial support from the federal government and cable companies, was launched.

"Suddenly it was possible for us to get initial seed funding," he says.

The other factor is digital distribution – where consumers buy and download games from online stores, instead of purchasing a physical copy.

Before digital distribution, small developers had no choice but to make deals with large publishers to get shelf space in stores and pay for the production of copies, says Mr. Provost, who spent over a decade working at small studios before starting Compulsion in 2009.

"There's more competition for developers to actually stand out," he says.

To get noticed, Compulsion has formed partnerships with companies that make video game consoles, such as Sony and Microsoft.

It has also engaged with players early in the development process. Its current game, We Happy Few, has been released through what's called "early access" – which allows people to buy, and start playing, the game while its still in development.

Mr. Provost says it's a way to gather feedback as well as create the sort of goodwill that can drive word-of-mouth and positive consumer reviews.

There's another factor allowing independent developers to compete on some of the same terms as AAA publishers, says Jesse Houston the co-founder and president of Vancouver-based game developer Phoenix Labs.

Over the past few years, some of the most popular software suites used to build video games have become much more affordable or have become available for free.

At one time, studios spent millions of dollars developing these "game engines."

"There's this democratization of really cool engines that takes the edge of off developing for the PC and consoles," Mr. Houston says. "Now, all of a sudden, a smaller group of people can really get moving without having to build an engine first."

I ditched the corporate world to spend seven glorious months living and working out of my truck
January 17, 2017 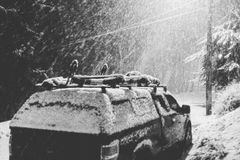