When a large crowd gathered to hear Alibaba founder Jack Ma in Toronto last November, they got the cutting edge e-commerce insights they were expecting, and more. With the technological age maturing, Mr. Ma said, our next economic revolution will be centred on creativity and empathy, and it will be dominated by women.

This didn't surprise those of us who work with women entrepreneurs and see their incredible passion and innovative zeal, but it was a welcome nudge to the federal government and others who have the power to elevate and leverage women entrepreneurs that we can – and must – do more. We need the federal government to lead in uniting the good work currently being done with a national approach.

At its core, entrepreneurship is about spotting problems and creating solutions. These are not gender-specific skills, but an entrepreneur's gender can influence what problems they see and how they respond.

I remember the awkward reactions of male business leaders I introduced to Joanna Griffiths, who had recently founded Knixwear. They likely had no idea that many women face leakage issues due to menstruation and having children, let alone any thought of creating the leak-proof fabric that helped Knixwear make $20-million in sales to customers worldwide in 2017.

They might have also discounted the prospects of 23-year-old Tara Bosch, who was inspired by her grandmother to launch SmartSweets, the first candy products without sugar, sugar alcohols or artificial sweeteners. SmartSweets earned over $1-million in gross sales in its first year and is looking to achieve $18-million in sales in its second. Equally important, Ms. Bosch has created a large Kick Sugar community on social media, driving awareness and empowering people to make smarter eating choices.

Unfortunately, too few Canadian women bring their business ideas to life. When the federal government last looked at who owns small and medium-sized businesses, it found that 64.6 per cent were majority-owned by men, only 15.7 per cent by women, and the rest equally owned.

What's the problem? We are not equipping our children with the entrepreneurial mindsets and skill sets they will need to maintain careers and making them aware that entrepreneurship is a viable career path. It doesn't help when they see unrealistic "role models" in the media, who are often male and creating apps rather than the more tangible goods and services that make up 98 per cent of Canada's economy.

Women are as game for entrepreneurial risk as men, but they take a more holistic approach to assessing risk. While more and more women are attracted to the independence, control and creativity running their own businesses will allow, they balance this desire against the possibility of failure and its impacts on the people around them.

Building the skills, confidence and resources women need to capitalize on their business ideas through well-informed risk-taking pays off in spades. We have seen this at Futurpreneur Canada, where more than 40 per cent of the 1,000-plus startups we support with business coaching, financing and mentoring each year are led by young women.

Once they've launched their businesses, women understand that continuing to respond to the opportunities and risks around them is critical to their viability and success. When innovating, women are helped by their willingness to tap in to those around them for information and support, but this only helps to the extent that they have helpful networks to tap in to.

Knixwear's Ms. Griffiths built a strong network that helped build her company's skills, resources and markets. She quickly got her products into major retailers, launched the largest-ever fashion crowdfunding campaign and eventually shifted to a successful e-commerce model.

Unfortunately, however, few women entrepreneurs have access to the networks they need. Business networks have been traditionally dominated by men and many still have male-oriented approaches. Women may be further isolated because of where they live and a lack of high-speed internet access.

There are increasing numbers of incubators and programs designed to help new businesses grow, but they are generally in larger urban centres and focus on technology businesses. They may not feel welcoming to women leading product and service businesses, even those that are technology-enabled.

Done well, focused mentoring and periodic coaching and advice help women entrepreneurs deal with growth challenges and opportunities. Both are efficient, available anywhere either in-person or virtually, and leverage the incredible intellectual capital, experience and networks of existing entrepreneurs and business experts.

Canada has the interested and innovative women it needs to excel in the coming age of creativity and empathy. It's now time to capitalize on their potential.

The federal government must take action to ensure that all Canadian women can access the foundational support and role models they need to be inspired and prepared to launch and grow successful businesses. It can do this by building and connecting initiatives that work such as Futurpreneur Canada, regional women's enterprise centres and the Business Development Bank of Canada. The result will be a robust, inclusive and modern economy for us all. 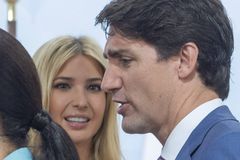 Strategic partnerships can be a game changer for your small business
August 3, 2017
Follow us on Twitter @globeandmail Opens in a new window
Report an error
Due to technical reasons, we have temporarily removed commenting from our articles. We hope to have this fixed soon. Thank you for your patience. If you are looking to give feedback on our new site, please send it along to feedback@globeandmail.com. If you want to write a letter to the editor, please forward to letters@globeandmail.com.
Comments are closed