Something's not right. The Kevin O'Leary of Dragons' Den and Shark Tank TV fame is a fabulous tycoon. Shouldn't we be meeting in a palace or a yacht, the kind of place that lets the world know you've hit money-making's major leagues?

His rental unit is by no means shabby. It's a sprawling apartment that looks across Toronto's high-end Yorkville district, and though it sits above a shop, the shop is Pusateri's Fine Foods, the perfect takeout place for the plutocrat on the go. Not bad for a guy whose hard-drinking Irish salesman father died young, whose Lebanese-born seamstress mother found peace only when she married an Egyptian academic who aspired to help the global poor.

But this definitely isn't the gilded Bridle Path château that would suit his TV swagger.

"Excuse the mess," he says as we walk past squash racquets leaning against a bare wall. There isn't much of a mess.

He's got a few treasures on display. There's a personally autographed Gibson Les Paul, the pride of a vast guitar collection; an ancient mosaic from Antioch, not far from the island of Cyprus where he spent happy years while his stepfather worked for the International Labour Organization; a vintage Leica M3 – Mr. O'Leary once aspired to be a fashion photographer; and a Chagall work titled Greed, though the debauched figure in the etching looks nothing like its robust, squash-playing owner.

The rest of the sparse flat looks almost unoccupied. Kevin O'Leary is selling a dream to his business-show followers and to the investors who have handed over their money to O'Leary Funds, a venture that has leveraged his fame and grown from zero to $1.5-billion in 30 months. But something is missing at the core of his legendary life.

The entrepreneur who revels in being "the mean one" on Dragons' Den, who delights in being called "asshole" by strangers, is trying out his Don Cherry imitation. He's promoting his new memoir, Cold Hard Truth, which means sending an I-know-best message to budding capitalists.

"Money equals freedom," he declares while chewing on gummi bears. "Have one if you'd like," he says.

When not on-message, he is surprisingly subdued, nothing like the ranter on CBC's The Lang & O'Leary Exchange who excoriates everything polite and Canadian.

"You may lose your wife, you may lose your dog, your mother may hate you," he says, returning to his money-centred sales pitch. He likes to say he combines his father's confident Irish patter with the Phoenician trader mentality from his mother's side. And then he adds wisdom gleaned from his own success story. "None of those things matter. What matters is that you achieve success and become free. Then you can do whatever you like."

Kevin O'Leary does exactly what he likes. That's the image anyway. But the man who's enunciating this mantra is more conflicted than you would guess from the bravado. His promise has come true. He lost Linda, his wife of 21 years. Or she lost him.

Marriages are often collateral damage in the relentless drive to get rich. But there's no mention of the breakup in Cold Hard Truth.

"When I wrote the book, I was married," he offers. We've been chatting for almost an hour before word of his separation slips out. He has talked about the storage business he built up, about how miserable he was when he was paid $5-million not to work in a non-compete after he sold an educational-software business called The Learning Company to Mattel for $3.5-billion in 1999. "I went to every beach around the world, I saw them all, I partied everywhere, I was bored out of my mind."

He had made millions of dollars himself in the merger with Mattel, which took place just before the bottom fell out of the dot-com business. Ever since, he has enjoyed a reputation for having the magic touch.

"He's certainly one of the luckier guys on the Street," says a Bay Street financier who is more reticent than Mr. O'Leary about taking potshots. "Everyone admires a guy who cashed out at the right time."

Luck, nothing, Mr. O'Leary insists. His fortune comes from a simple homespun philosophy: Be a cold-hearted bastard and work like hell while the losers you're about to destroy are nattering about work/life balance.

While freedom is the destination, Mr. O'Leary's TV-villain truth-telling includes considerable human damage. "Business is war. I go out there, I want to kill the competitors. I want to make their lives miserable. I want to steal their market share. I want them to fear me and I want everyone on my team thinking we're going to win."

His memoirs chronicle a life in which he is happy firing overpriced software developers who don't get his cost-cutting Wal-Mart values – Whack a Programmer, he calls it – and mocking a rival who damned him as a dog-food guy (he actually started his career pushing Nabisco's cat-food line).

"Eight months later, I took over his company. I walked into his boardroom and said, 'I'm the dog-food guy. You're gone.' " It sounds like he was auditioning for reality TV back when he was the real thing.

"People always want to know … is it just an act?" his CBC colleague Amanda Lang says. "Kevin O'Leary is not acting. He speaks honestly and bluntly. One of the reasons I put up with him is because he's genuine."

Mr. O'Leary is still in the financial game with O'Leary Funds, but the boundaries between his business dealings and his TV persona have become obscured: As the company's celebrity salesman, he likes to tell tales about how his investment strategy derives from his mother's conservative preference for safe stocks that pay dividends.

"He doesn't adequately talk about the risks," Denver-based financial journalist David Milstead says. "His funds are not bonds funds, there's a significant amount of stock in them and stocks have been very volatile for several years. You can't talk about stock funds and use words like 'conservative' and 'what my mother would want.' "

"I'm not convinced he's the great entrepreneur he puts himself out to be," adds Chris Damas, president of BCMI Research, an independent equity research company. "The guy's a great salesman but unfortunately he's advising other entrepreneurs on live TV. Entrepreneurs need to build something real."

Mr. O'Leary's take-no-prisoners business commentary on The Lang & O'Leary Exchange comes in for even harsher criticism from his anonymous Bay Street critics, who call him a caricature of greedy capitalism and a media-fixated self-promoter. But give them the chance to vent in public and they go quiet very fast. Candour is Kevin O'Leary's specialty and his strongest selling point.

Which makes it even harder for him to sort out the loss of his wife. He blames his TV career for coming between them. "To me, it's just a job, but not to her."

Amanda Lang remembers a moment when ABC's Shark Tank was about to launch in Los Angeles. "L.A. has a well-oiled fame mechanism and he was really getting into it. He was hanging around rappers at the Roosevelt Hotel and said to me, 'I'm thinking of getting a stylist.' I said, 'Jesus Christ, O'Leary, take Linda with you, because otherwise she's going to think you're turning into a total asshole.' "

The author of Cold Hard Truth is still trying to learn from this particular truth. "It shows the balance of life is always a challenge," he decides. "I would never have anticipated that this would happen. I see this as just a hobby. But it's just taken me to a whole different place."

He got an invitation from the Discovery Channel to travel the world on a $60-million budget. "Do you know how intoxicating that is?" he says. "I said yes and I wasn't home for 11 months."

He hesitates. Is it the TV pro's dramatic pause, or is he really weighing the Northern Lights in the centre of Greenland against 21 years of marriage?

"The troubling thing is, I would do it again. You only live once."

There's a cold, hard truth for you. 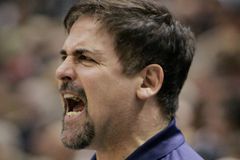