Don Bubar was considered a bit of an oddball in the mid-1990s when he started a mining company that explored rare earth elements with strange names such as dysprosium, neodymium and terbium.

Today, his obscure industry is attracting a lot of attention thanks to an explosion in demand for rare earth elements for use in everything from hybrid cars and wind turbines to missile technology.

"It's been a long road, but we saw the opportunity with rare metals and stuck with it," said Mr. Bubar, chief executive officer of Avalon Rare Metals Inc., whose flagship Nechalacho project in the Northwest Territories is considered one of the largest rare earth deposits in North America.

"I am kind of stubborn, too," he said. "Once I decide I want to do something, I don't give up easily."

While Toronto-based Avalon struggled to survive at the start, his perseverance, not to mention his more than 30 years as a geologist, appears to be paying off.

Not only has his company raised millions of dollars in recent years to help develop the $400-million Nechalacho project, but it is also positioning itself to take advantage of the new rare earth rush.

Like many junior miners before it, tiny Avalon – it has only six full-time employees – is leveraging its exploration expertise to develop a project it hopes will attract investors who will help finance it through to production, which is expected in 2014.

Nechalacho is already considered one of the more advanced-stage rare earth projects in the world today.

"Now that the demand is there, we see this as a pretty good business and are demonstrating that we can bring it to production," Mr. Bubar said.

Investment bankers are knocking on his door, and end users in the auto and other industries also will be interested in hearing more after Avalon releases its much-anticipated pre-feasibility study with updated costs in a few weeks.

"That's pretty encouraging when they are coming to you, instead of the other way around, which I have been more used to in this business in the past," Mr. Bubar said.

The toughest years for Avalon came after the dot-com meltdown earlier this century, which knocked the wind out of companies such as his that were riding the technology wave.

To stay afloat, Avalon cut costs dramatically, including its office in Thunder Bay. "I rode it out as the sole employee for a couple of years, with the assistance of my accountant keeping me alive," Mr. Bubar said.

What Avalon didn't do at the time was consolidate stock, which Mr. Bubar believes kept his investors from fleeing.

Today, investor interest in rare earth elements is growing as the United States introduced legislation last week to develop its own domestic supply.

Meanwhile, China, which produces more than 90 per cent of rare earths on the market today, is steadily reducing its exports each year to first meet its own growing needs first.

The increased demand for rare earths – which are also used in electronics, specialty glass and nuclear applications – has spurred the creation of dozens of new exploration companies hoping to cash in on the growing trend.

That is expected to create an oversupply of certain types of the materials, known as light rare earth elements, which are easier to find in the Earth's crust than heavy rare earths.

It is those producers who have a combination of light and heavy earth elements who have the potential to reap big profits in the years to come, according to Jon Hykawy, an analyst at Byron Capital Markets in Toronto.

"Most investors realize that the heavy rare earth element command the higher price because they are rarer," he said.

Avalon is one of those players, and has a higher concentration of heavy metals than most of its peers.

"Avalon has one of the highest levels of heavies located outside China," said Mr. Hykawy.

Still, the company has a lot of work to do before reaching production and faces risks such as contamination of its elements when mined, as well as production delays.

It also needs to raise more money to get the mine built and into production.

Avalon raised $16.5-million in 2007 and another $17.5-million last summer, when a lot of mining companies, especially juniors, were still having trouble raising money.

It plans to go back to market in the coming months to raise between $20-million and $30-million, which it will use to keep up its development plans over the next two to three years.

"We continue to be a reasonably attractive opportunity for investors looking for exposure to rare earth space," Mr. Bubar said. "Of course these things can change pretty quickly, and we are wary of that."

Avalon also owns a lithium development project in Ontario and a tin-indium-gallium-germanium project in Nova Scotia.

Other Canadian-based companies with rare earth projects include Saskatchewan-based Great Western Minerals Group Ltd., which trades on the TSX Venture Exchange and has a development in Africa, and privately held Molycorp Minerals, which is behind the Mountain Pass project in California.

Of the three projects, Avalon's Nechalacho proposed project is the only new heavy rare earth mine.

Mr. Hykawy joined us for a live discussion on the rush to mine rare earth elements and Canada's role. Click here to go to an archive of the discussion page. 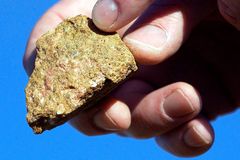