Ohio has a cordial message for players in the global startup scene: it's not a flyover state.

Between handshakes in more prominent entrepreneurial hubs on either American coast, venture capitalists are attempting to make more pit stops here in recent years. There are nearly 50 VC firms active in Ohio, a five-fold increase over five years, according to CB Insights.

It's a narrative that repeats across the American Rust Belt. Michigan, for one, has witnessed explosive growth of its own: in 2014, venture capital investment in startups reached $219-million (U.S.), a 97 per cent rise from the previous year. Nearly two-thirds of the funds came from out of state.

Just a few years ago, there was barely any money at all, says Jared Statsik, vice-president of Detroit Venture Partners. But he says the conviction to build companies in the region is growing, and discerning coastal venture capitalists will start to notice the flow of deals. Likewise, other former industrial cities like Pittsburgh and Buffalo, N.Y., have developed burgeoning life sciences scenes.

But it's Ohio where the growth of VC activity trumps all states. An outsider like Dana Settle has observed the "fierce loyalty" that's driving the community's growth first hand. Her firm, Greycroft, has offices in Los Angeles and New York, but connections at Cincinnati's Cintrifuse, a startup advocator that runs a $56-million fund of funds, lured it into a Midwestern city more synonymous with employers that boast multi-billion dollar valuations, like Procter & Gamble and Kroger.

"Great entrepreneurs are everywhere," said Ms. Settle, a co-founder and partner at Greycroft. "It might be difficult to scale in terms of hiring the number of engineers and experienced management, but companies that do well become magnets for the top talent in those markets."

Ohio's startup success stories aren't yet household names in the ilk of Groupon, the Midwest's most recognizable exit. But with startups like CoverMyMeds scoring large amounts of financing and Oracle's acquisition of TOA Technologies last year, there's optimism that the big wins will come.

"Just being surrounded by those wins, other entrepreneurs feel like 'Man, I'm not the only one trying to do something special.' They're willing to take a gamble because they've seen others take that same gamble," said Andy Nielsen, founder of Greycroft-backed Everything But The House, an online estate sale platform.

At The Brandery, founder teams are paired up with mentors from the corporate sector in a state ripe with blue chip clout: Ohio ranks sixth in the number of Fortune 500 company headquarters in the U.S.

University graduates used to flock to companies like Procter & Gamble. "That's shifted. Now you see more kids going to startups out of college than ever before," said Chris Olsen, a partner at Columbus venture capital firm Drive Capital.

The state government is chipping in to encourage new ventures. It sunk $2.1-billion into an economic initiative called Ohio Third Frontier, which provides venture funding to early stage technology companies. There's also a fund of funds, the Ohio Capital Fund, which puts money into venture capital funds that invest in local companies. So far, it has allocated $250-million to 76 early-stage companies.

Founders of local firms, such as Jeff Harper of medical technology company Duet Health, say they don't need to move out of state to scale. Mr. Harper makes frequent visits to Boston, renowned as a medical technology centre, but has no intention to move there.

"I don't think we need to," Mr. Harper said. "In the technology world, where you are is less relevant than ever."

Part of the allure of staying in Ohio is the relatively cheap cost of living. One example is Cincinnati's trendy Over-The-Rhine neighbourhood, which for decades was rife with poverty. Cheap real estate has lead to a profound revitalization that startups have joined in on, creating hundreds of jobs.

The Brandery, for instance, is leasing more than a dozen apartments to help put people right in the thick of things.

"It's kind of a symbiotic relationship between the entrepreneurial ecosystem and the neighbourhood revitalizing each other at the same time," said The Brandery's Mr. Alexander.

The bargain prices also apply to the startups themselves, which are often priced lower than firms in places like Silicon Valley.

"There are good deals here. The VCs, especially from the Coast, realize they were getting the same level of ideas and execution [here] for a third of the value out there," said Mr. Alexander. 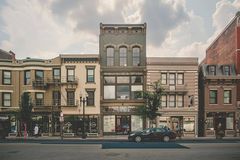