Three years ago, Joey Bedard decided to become a farmer. After leaving high school, Mr. Bedard, 28, became a construction contractor, doing off-the-beaten-path jobs like renovating fishing lodges in British Columbia. But, he says, "my retirement dream is to be on my farm driving my tractor."

For inspiration Mr. Bedard turned to his dad, an army-veteran-turned-hobby-farmer who started growing hops in St. Isidore, Ont., the town where Mr. Bedard grew up. There, Mr. Bedard learned that hops – which give beer aroma, bitterness and flavour – were in short supply. Demand was up thanks to a surge in craft breweries opening in Canada. He decided to become a hop farmer, too.

Once almost a dead industry in Canada, hop farming is making a comeback. Most farms are tiny. In Ontario and Quebec, they typically grow two to three acres. But in British Columbia, some growers are tending more than 100 acres.

Take Mr. Bedard. His farm in Kamloops aims to grow 240 acres of hops, which he says makes his the largest single hop farm in the country. To date, some 200 acres of hop plants, a perennial, are in the ground.

At first, Mr. Bedard only intended to test an acre or so, then expand. Those plans changed early in 2015 when he came across a plot he thought just right for farming, owned by the Tk'emlups te Secwepemc, a First Nation band near Kamloops. Rather than rent to Mr. Bedard, the band offered to partner on a much larger hop growing operation.

The result is the Tk'emlups te Secwepemc Hops Farm Partnership. It includes not only the farm but also a hops brokerage, called Hops Canada, started by Mr. Bedard to act as a middleman between growers and brewers. Two-thirds of the business is owned by the Tk'emlups band; the rest by Mr. Bedard.

More than $2-million has been invested to date. Howard Campbell, a Tk'emlups councillor, sees large-scale hops growing as a way to create jobs for band members and generate long-term revenue. "There's so much demand for hops. We're almost at the start of a new industry," he says.

The BC Hop Growers Association, formed last summer, says there are now around 30 hop growers in the province, up from three a decade ago. Raymond Bredenhof, the group's founding chairman, says most are looking to expand. That includes his farm in Abbotsford, which this year will more than double in size to 14 acres of hops.

"Every time a new brewery opens up, they're looking for a supplier," Mr. Bredenhof says. The number of craft breweries in British Columbia has soared to more than 120. Last year alone 16 opened and the year before that 24 set up shop, says the BC Craft Brewers Guild.

Size matters in hop farming because startup costs are high. Hop plants require plenty of water and grow to more than 20 feet each summer. Long before a single plant is put in the ground, trellis and irrigation systems must be installed, costing $12,000 to $18,000 an acre. Additionally, tens of thousands are needed for a specialized harvester and other equipment.

"You can't make money as a hop farmer on five acres. You have to get bigger," says Dwayne Stewart, general manager at BC Hop Co. in Abbotsford, which will oversee 125 acres this year.

Hop plants take four years to mature in order to produce hops of sufficient quantity and quality that brewers demand. But patience pays off. An acre of mature hops is worth anywhere from $10,000 to $25,000.

Craft brewing's popularity worldwide has kept hop prices high. Common varieties can fetch $10 to $12 a pound; specialized types more than $20. Helping spur demand is that flavourful craft beers, such as India pale ales, use four to five times as much hops as an average commercial brew.

John Lawrence, president of Chilliwack Hop Farms, does not anticipate prices will fall any time soon. His company is among the largest growers in British Columbia, with 200 acres across several properties. Mr. Lawrence expects to add another 100 acres this year.

"I think we can make hops as big an industry in B.C. as it used to be," he says.

Mr. Lawrence is referring to the fact that throughout most of the 20th century British Columbia had a thriving hops industry. In the 1940s, the province's Fraser Valley alone was the largest hop producer in the British Empire.

But stagnant prices, pests and competition from abroad took the froth out. The last hop farm in British Columbia closed in 1997. By then, production had moved to the Yakima Valley in Washington. Today Washington grows around 30 per cent of the world's hops.

British Columbia's hops industry won't ever rival Washington's in size, but it is starting to regain some past glory. Growers are now starting to ship to craft brewers not only in B.C. but also the United States, Europe and Latin America.

Tom Baumann, associate professor of agriculture at the University of the Fraser Valley in Chilliwack, says the trick to further growth will be for British Columbia to gain a reputation around the world for the quality of its hops.

"If we can cater to the microbreweries then we'll have a substantial industry," he says. 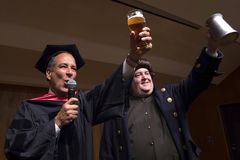 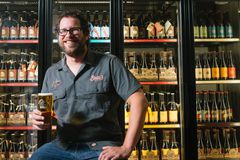 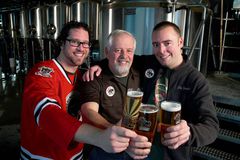