Mass Fidelity Inc. wants to set the audio industry on its ear. Launched in 2009, the Toronto-based startup recently made waves by setting the record for Canada's top crowdfunding campaign, raising more than $1-million this fall on Indiegogo for its wireless speaker system.

About 4,000 people from 92 countries preordered the Core speaker, and frequently its companion subwoofer. The Core, which measures 15 by 15 by 10 centimetres, can play music via a wireless Bluetooth connection from a smartphone, laptop, tablet or streaming website. Delivery is promised in early 2015. The product received rave reviews from The Wall Street Journal, Tech Hive and other publications.

"The technology we're using is really cool because it eliminates the need to have multiple speaker setups. You can hold it in the palm of your hand and it sounds like two widely spaced hi-fi speakers," says Ben Webster, Mass Fidelity's co-founder and chief executive officer.

The Core will be sold for $600 (U.S.) on the company's website and in high-end Canadian and U.S. audio stores beginning in spring.

The company has two paid employees in addition to Mr. Webster and his co-founder Neil D'Souza. The pair financed their own research and development over the past five years. They plan to use the crowdfunding money to increase production of Core but also to develop a sales team. Mr. Webster believes the Core system has the potential to be a mass market success and he would like to take the product to international markets.

Mass Fidelity has chosen to focus on sales online and at independent retailers – not at big-box stores, yet. The company has one person looking after the United States and other international markets. Past experiences with international distributors and distribution companies have mostly been disappointing. Plus the company still has limited funds and can't attack every market, Mr. Webster says.

"We need to move on with an international sales team," he says. "Leads I get now can be confusing and frustrating, so we need to have a more focused drive in specific markets."

With manufacturing already well established in Guangdong province in China, Mr. Webster says they're ready to scale up if things go well. But which markets should he start with? And how should he use his resources?

The Challenge: How can Mass Fidelity develop an international sales team when it has limited funds and can't attack every market?

Entering the European market gives you access to a large, wealthy consumer base. However, long-term growth there might be constrained by unfavorable economic conditions and an aging population.

Entering Asian markets could be difficult due to significant cultural, administrative and economic differences, but there's a high potential for long-term growth. Tech-savvy consumers in highly developed Asian markets such as Japan, Korea, and Singapore are known to be early adopters of cutting-edge tech products. As living space in these countries is very small, consumers should also value the size of your products. Success in the developed Asian markets can build brand recognition in the region and eventually serve as a gateway to high-growth emerging markets such as China.

Whoever is responsible for marketing and selling in the host country needs to be an industry and a country expert plus well networked. In China, networking is one of the main success factors.

So the question is whether you can hire someone who has these characteristics or whether it is better to work with a distributor who has these characteristics and puts effort into marketing and selling the product. Hiring someone gives you more control, however it might be difficult to hire the right person. In Japan, even large Western firms have difficulties hiring talent because the big Japanese corporations are much more attractive to potential employees. In this case, working with an excellent distributor could be the better choice.

I'd suggest having a regional manager on the ground who co-ordinates activities across several countries. That becomes increasingly important as you grow in different countries within one region.

Overseas, I'd want to target markets similar to the ones where they've seen success. If their brand is one of best quality audio in a compact package, they need to make sure that they tie up with a sales force that can sell it as such.

Selling into audio-focused retail outlets in places such as Britain should be pretty easy. Europe is a natural fit. Mobile penetration is very high there – well over 100 per cent – and most people have more than one device. Once they have a foothold in Europe, China may be an easy landing point since they already have a manufacturing presence. Their manufacturer may be able to help them connect into some of the retail environment. There's an appetite for devices in China where disposable income is high.

My inclination is to find a channel partner who knows the market do distribution. They need to deliver profitable growth for their distributor if they choose that route. If there isn't room in their financial structure for that kind of relationship with a distributor, then they might test out having their own dedicated sales force who's going to chase those retailers themselves. They'll want to find somebody already present in that market, someone experienced in electronics who also lives there. They need to have laser focus, test out a couple of regions and see how they go.

Also, there are no borders on the Internet. They should certainly be targeting people around the world with educational programs about why their product should be part of a consumer's electronic mix in their home. Their Indigogo campaign should give them some leverage. What it says is that enough people believed in it to put over a $1-million behind it.

First, I like their approach of not going to big box retailers, at least not yet. This market is extremely saturated, and exclusivity can be a core feature. Having to go to a specialist makes the product more alluring and ensures that those seeking this product are serious buyers.

The challenge seems to be around how to create the awareness, and then demand, for the product. If they're already successful in North America, one avenue to continue to own is creating word of mouth. A smart website rich in content and user-generated content (created by consumers) will help their grassroots efforts. Examining where their Web traffic is coming from can help determine where to start focusing on distribution, but they may want to stick with English-speaking European countries as a start.

Building a direct sales team is smart. Focus on locals who already have a passion for audio and know their market. By controlling that part they can put their focus on distribution, which will likely be the most difficult part. They should focus on a distributor that will give them more of a boutique experience, particularly if they've been burned in the past. Likewise, if they're going to focus on e-sales, perhaps there are distributors that are more like shipping bays, where Mass Fidelity still owns the buying process on their site, but someone local just does the shipping.

Start in countries with a similar culture

Canada to Britain is a fairly straightforward transition and a good foothold into Europe.

Look at where Web traffic is coming from

That can help determine where you should start focusing on distribution. 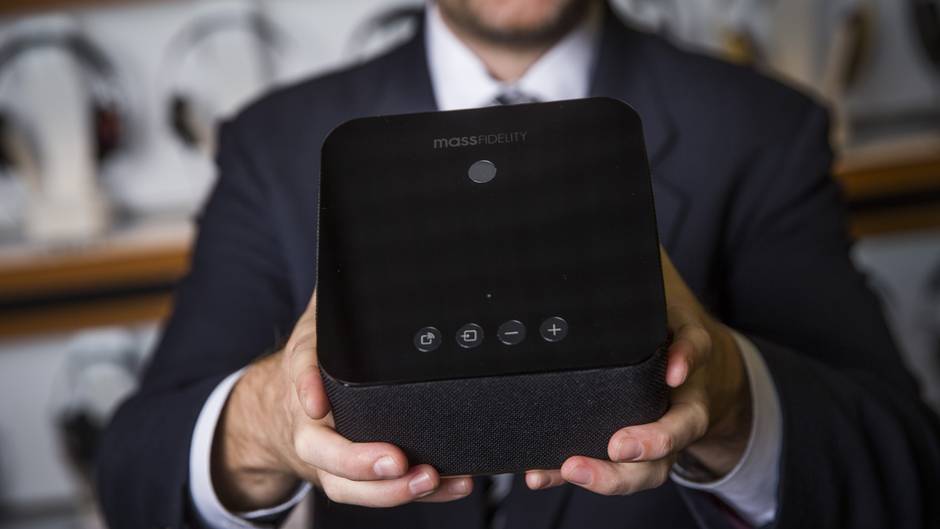 Mark Blinch for The Globe and Mail

A closeup of the Core speaker, by Mass Fidelity of Toronto.