Mac Osborne fires up his propane forge and his shop fills with a whooshing sound. He pops a 3/8-inch steel rod inside. “I like blacksmithing, man,” he says as the forge slowly heats to more than 1,000 degrees. “Whenever people see it, they’re like, what? This exists? It’s so cool! It’s primal, man. It’s a hammer and you, and you’re moving steel.”

He does just that, pulling the rod from the forge, setting it on the nearest of his four anvils and patiently tapping away at the edges. It will become a one-of-a-kind artisanal snail.

“I’d love to make some sort of Angry Birds ripoff, have them make a movie out of it, walk away a billionaire,” Mr. Osborne says. “But you gotta do what you enjoy. I can’t do the sit-in-front-of-a-computer thing.” 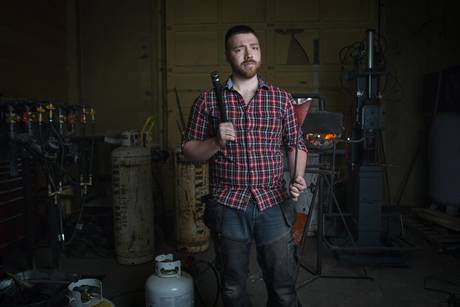 At 23, Mr. Osborne is already working his dream job. The problem is that he’s a blacksmith in an era where people don’t realize blacksmiths still exist.

He grew up in Kincardine, Ont., on the shore of Lake Huron, thinking he wanted to be a marine biologist. Then he spent a month sailing across the Atlantic, where he spoke with an actual marine biologist. He asked what the fellow did during his day.

“He said, ‘You know, you go out and study some things, and you look at some fish, and you go back and catalogue, punch it all into Excel.’ And I was like, Oh. You lost me at the Excel part.” 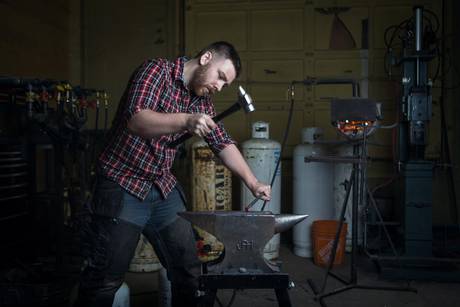 After bailing from that dream, his mother suggested meeting with a nearby blacksmith, David Robertson. Mr. Osborne was enticed by his workshop, and he took every course the elder blacksmith offered, including knife-making and forge-building.

Mr. Osborne then studied blacksmithing for a few months at Fleming College in Haliburton, Ont., and spent a month in England working with a blacksmith there. (Blacksmithing does not require an apprenticeship in Canada.) He opened a shop in Kincardine, but after a few years, “I had made a table or something for everyone in town.”

He moved to Toronto last year and opened a shop in a warehouse near Keele Street and Eglinton Avenue. It’s his playhouse, littered with propane tanks, practice designs and one-off projects. A half-made Viking-style helmet sits on a table near the forge, which he also built himself. 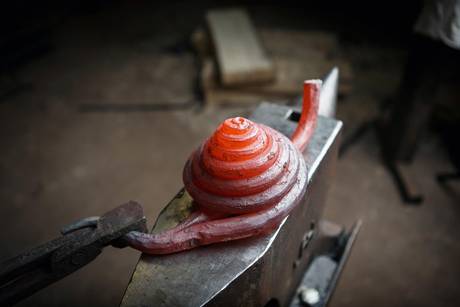 He makes most of his money doing more general metalwork – a lot of cutting and welding but not much forge work – building tables and larger objects such as stairs. It makes him enough money to get by. What he really wants to do is spend more time at the forge, and go downtown.

He is drawn to natural shapes. He loves making small artistic objects – snails, roses, dice, custom designs – and dreams of a storefront shop in Toronto’s core where people can visit, browse designs and make custom orders. He’s working toward that, building a social media presence and advertising on Facebook and Kijiji. 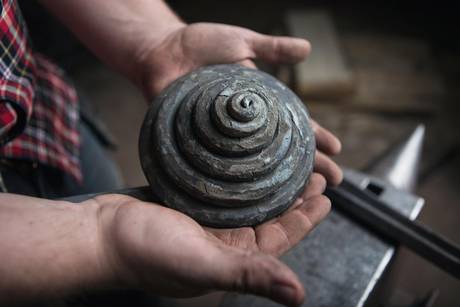 Every time people hear he’s a blacksmith, Mr. Osborne says, they place an order. If he can keep building that momentum, he could raise enough money to establish a shop. But beyond social media, he wonders, can he market more to craft-loving people?

“If I could make my living off doing the small stuff like that, ooh, I’d be happy as a clam,” he says with a smile and small-town affability. “Everyone wants something. That’s really cool, but no one knows I’m here.”

THE CHALLENGE: How can a blacksmith build a brand in the 21st century?

If he’s going the artisanal route, the brand story is different than if he is marketing himself as a fabricator. He’s an artist and passionate about what he’s doing. People are really interested in handmade, quality products. In the digital environment, there is a niche and a long-tail group of people who are definitely into this stuff. How does he reach them? Tell the story. It’s a great one.

People buy why you do something, not what you do. The story is the key. The customer experience is, “Wow, this guy really knows his stuff. He’s passionate. His things are beautiful.”

The second step is to find an online environment that’s easy to work with. I would look at a Shopify platform. Probably even better would be the eBay global marketplace. These things are perfect for doing online commerce. He might be shocked – people in Japan might really love his stuff, compared to the U.S.

He might start playing around with Google AdWords. His keywords are probably low-cost – he’s not competing with car companies. Lastly, I think social media will be huge for this guy. He should be continuing the narrative on social about being passionate about what he does. It’s a slow burn: If he does it well, he will get followers, especially with millennials. Once they see somebody is good at something real, they’re attracted to that.

He should tap into local artist communities to see about shared marketing opportunities. He should attend artisan fairs, create a storefront on a website like Etsy, and connect with local tourism organizations to promote his classes and workshops.

In considering if and where to relocate, I would recommend he investigate neighbourhoods that serve as destinations for individuals looking for unique artwork, crafts and gifts. Another option would be to partner with a storefront willing to feature his work and maintain his industrial workspace where he can continue to build his brand by hosting workshops and allowing people to see him work.

People are drawn to good stories, and Mr. Osborne has the opportunity to create a powerful brand by using storytelling to highlight both who he is and his passion for this vanishing craft.

David Dunkley, a milliner (hat maker) who has outfitted the Queen’s entourage, Toronto

Couture quality and art form are something you can’t get from mass-produced products. Websites and social media can’t communicate the fine details of the art. Placing yourself in front of a consumer and having them touch, smell and hear about why they want your product creates a desire and therefore a need. Getting out and selling at farmers markets, art shows, Christmas fairs and meeting people is the secret to a new artisan’s brand.

Make himself the brand

If potential customers don’t know people are blacksmithing in 2016, tell that exact story.

Tell that story over various social channels without going off-message. Take potential customers through the daily life of a blacksmith to show not just the wares, but how they’re made.

Get in their face

Look for a customer-facing shop in a pedestrian-heavy place, or partner with a vendor who will let him display his goods and use their space to forge.