Shortly after Christmas of 2015, Kurt Goodjohn received an e-mail that would change the direction of his business.

While on vacation in Mexico, Mr. Goodjohn, co-founder of Karoleena Inc., which makes prefabricated homes and cottages, was contacted by Rod Graham, the president and chief executive officer of Horizon North Logistics Inc., a Calgary-based provider of work-camp accommodations primarily to the natural resources sector.

Two months later, Karoleena had been sold and folded into Horizon North, which was expanding beyond work camps to offer commercial and residential accommodations.

While Mr. Goodjohn admits that no longer being his own boss was an adjustment, he says his role hasn't changed much. "I can focus on more important things than trying to grow this business, and less sleepless nights figuring out how to pay all the bills, which is not something we were great at," he says.

Being part of a bigger company also affords Karoleena greater efficiencies in production of its prefab, Lego-type homes. It had a 35,000-square-foot production facility in Okanagan Falls, B.C., but now has access to 110,000 square feet of additional workshop space in Kamloops and another 40,000 in Grande Prairie, Alta.

The company is also working on a secondary line of homes, at a lower price point, to suit situations such as the devastating fires in Fort McMurray, Alta., earlier this year.

"We are very much focused on what I think we were great at, which was the brand name and marketing and product development and sales," Mr. Goodjohn says. "So we've bolted that front end on to this great back end and we're totally focused on that."

For Mr. Graham, the two companies were a natural fit. He had read about Karoleena in a Small Business Challenge feature in The Globe and Mail in March of 2015.

Horizon North had spent a lot of time working on the interior of its work-camp accommodations, but the outer skin was still "very industrial looking," Mr. Graham said. "I took a look at the article and read through it and said, 'This is it. This is exactly what I need,'" he says.

The acquisition will allow Horizon North to expand the scope of its business into the residential sector. According to Mr. Goodjohn, the intent of Mr. Graham's purchase of Karoleena was for Kurt and his brother Kris, the company's co-founders, to inject their "magic" into all of Horizon North's offerings.

Another selling point for Mr. Graham was the involvement of former CBC Dragons' Den panelist and businessman Brett Wilson, who had invested $500,000 in Karoleena for a 25-per-cent stake in the company four years ago. Mr. Graham had previously done business with Mr. Wilson.

"For me that's always a very positive stamp," he says. "If you get access to Brett, you know you've got something going for you."

Another attraction for Mr. Graham was the imaginative side of Karoleena's co-founders. "What I wanted was non-conventional thinking and thought processes," he says.

The immediate plan for the new alliance is to focus on British Columbia, Alberta and the Pacific Northwest of the United States. Mr. Graham one day hopes to mine the West Coast transportation corridor all the way down to Northern California.

While Mr. Goodjohn acknowledges that this time last year he hoped to bring in about $20-million in sales annually, given the events of the past 12 months, that figure is now a given.

"We were limited by our abilities in knowing how to produce the product in a timely fashion and keep the product quality high," he says. But the sale of the company makes this target likely, he adds. 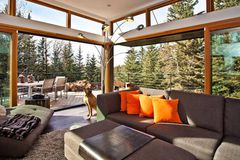 Nova Scotia brothers on right trajectory with golf gear
December 28, 2016
Made-in-Canada tuques keep heads warm in the U.S.
December 21, 2016
How different are Ontarians and Quebeckers? Online butcher finding out
December 14, 2016
Could quarterly bonuses keep part-time employees on the job?
December 7, 2016
It’s David-vs.-Goliath for Canadian hockey-gear maker
November 30, 2016
Follow Paul Attfield on Twitter @paulattfield
Report an error Editorial code of conduct
Due to technical reasons, we have temporarily removed commenting from our articles. We hope to have this fixed soon. Thank you for your patience. If you are looking to give feedback on our new site, please send it along to feedback@globeandmail.com. If you want to write a letter to the editor, please forward to letters@globeandmail.com.
Comments