When rival manufacturers copied his designs for furniture parts and flooded the marketplace with cheap replicas 10 years ago, Larry Guay faced little choice but to shut down.

That is, until he quite literally turned his fortunes. He looked for other products he could make with the wood-turning equipment he’d used to make spindles. “I’m sort of a hardhead and don’t like defeat,” Mr. Guay says.

He realized that every drummer needs at least two drumsticks. Wasting little time, he transformed Lawrence Wood Products and its Hanwell, N.B., factory into Los Cabos Drumsticks with his wife, Gillian Guay.

They spent the summer of 2005 driving to musical instrument stores across the country, selling their sticks. Canadians, the Guays found, like to buy products made here at home. A decade later, Los Cabos is one of the most popular drumstick brands in Canada.

It’s been a wild ride, Gillian says. “We’ve gone from kindergarten to university degree within 10 years. We’ve learned so much in this business.”

In other markets, though, their luck has been hit and miss, with that same brand patriotism working against them. The global field is dominated by stickmakers in the United States including Vic Firth, ProMark and Vater.

The couple know it’s hard to differentiate their product. “We haven’t reinvented the wheel,” Larry says. 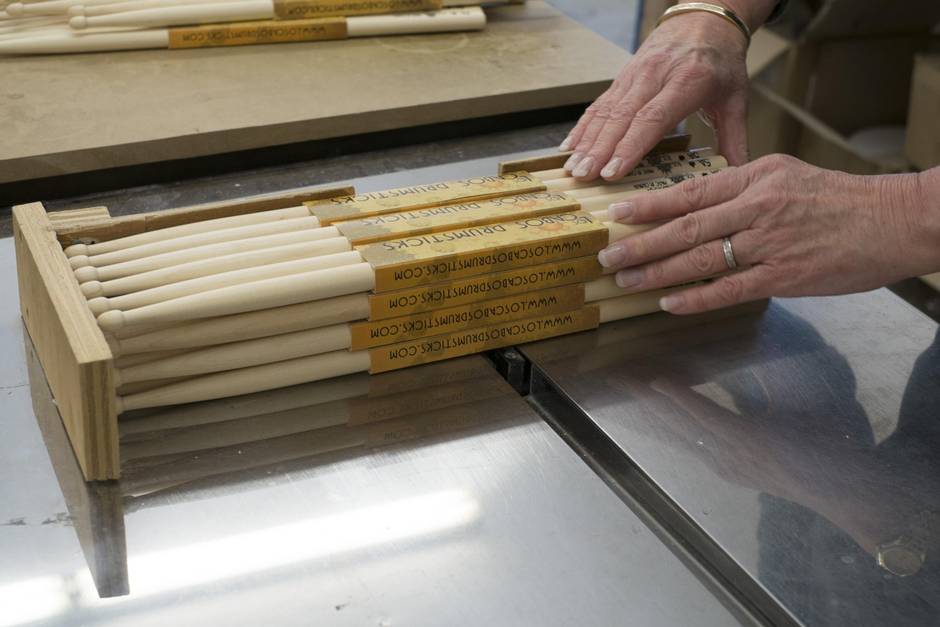 On the production floor at Los Cabos Drumsticks in Hanwell, N.B. (David Smith for The Globe and Mail)

Sitting at a table in their five-person factory southwest of Fredericton, they explain their unlikely growth. “When we first started, if we were doing 600 a day, we were happy,” Larry says. They thought 1,000 would be a great target after their 2005 launch. But today, “on a good day,” he says they make up to 4,500 sticks.

Los Cabos’s sticks, which sell for about $8 a pair, come in all shapes, lengths and weightings. Their first batch was of the highly popular 5A style, but the company quickly made a line of seven models before the Guays began their cross-country trek, guided only by a stack of MapQuest printouts.

The connections they made on that trek – and later through conventions, such as the massive National Association of Music Merchants (NAMM) trade show in California – helped them expand production of their sticks, which are turned from Canadian maple and American hickory. While most hickory sticks are from the white outer layers of the tree, Los Cabos is one of few drumstick makers to craft red hickory sticks from sturdier, red tree centres. They’re also experimenting with various grips to prevent their sticks from slipping out of sweaty hands.

“What’s important to me is working with a manufacturer that not only makes an awesome product, but listens to what you have to say. ... They are truly devoted to their craft.”
Richie Ramone, former drummer for the eponymous punk band who uses Los Cabos sticks

Among the famous drummers who use their sticks are Poison’s Rikki Rockett and Richie Ramone, a former drummer for the eponymous punk band. “What’s important to me is working with a manufacturer that not only makes an awesome product, but listens to what you have to say,” Mr. Ramone said in an e-mail. “Larry and his team at Los Cabos Drumsticks give me all of that and more. They are truly devoted to their craft.”

Could your business use $100,000? Enter the Small Business Challenge contest here.

Los Cabos has also made strides in Japan and parts of Europe. The company has found some success in China, where most local sticks are made from poor-quality wood. But in the United States, they stand little chance against the big manufacturers. 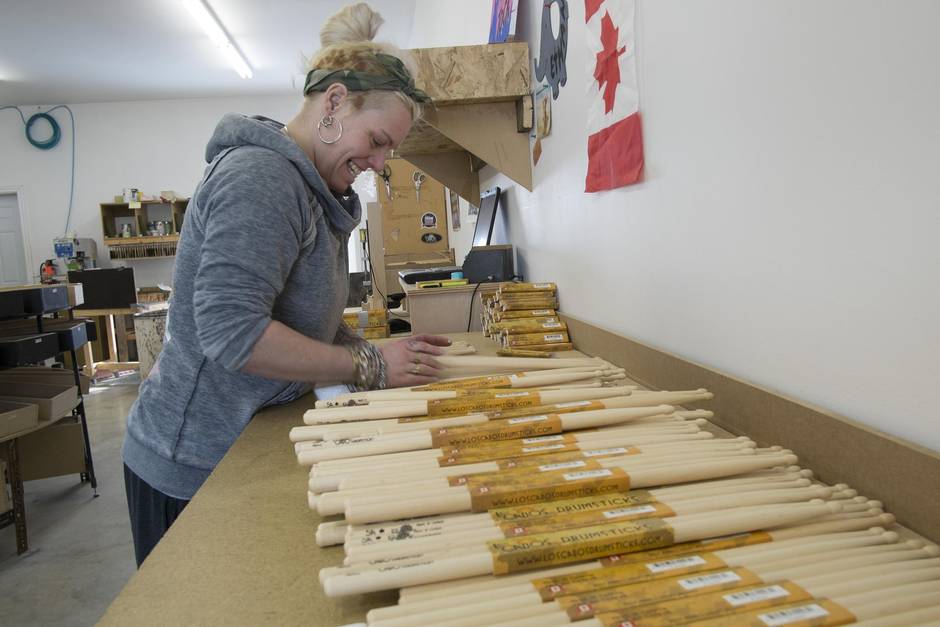 Steph Guay, director of operations at Los Cabos Drumsticks, packages some of the company's sticks. (David Smith for The Globe and Mail)

If they want to keep growing, they’ve got to beat both the big guys and the local heroes. “It’s a challenge to go up against those people, no question,” Gillian says.

THE CHALLENGE: How can a small Canadian company find traction in global markets where others already have a foothold?

You’ll never out-local the local, nor outgun the heavyweights. Fortunately, no one really buys “drumsticks.” They buy them as a means to an end – perhaps to articulate an image, to achieve a sense of musical artisan, to produce a specific sound. Pick one, identify the corresponding target market and then build and reinforce that positioning with advertising, social media, packaging and the other marketing and PR tools.

If the target customer is a Sammy Hagar/Van Halen type, then ask what would make their stick more rock-worthy. An endorsement by a rock drummer? Sound created by their type of wood on the drum skin or cymbal? A different handle to make it non-slip (for concerts) or more durable? On-stick graphics?

There is lots of room to deviate if you stop selling “drumsticks” – especially if they connected with another New Brunswick firm, Sabian Ltd. cymbals. And when you want to grow? Drop the name Los Cabos and replace it with something that might resonate with a jazz drummer, or classical musician.

When expanding into new or unproven markets, Los Cabos should consider leveraging their existing relationships with suppliers, business contacts and overall network to gain further insights and perspectives. Los Cabos can learn a tremendous amount by listening to others’ experiences and learnings.

These relationships can help them understand the dynamics of new markets and find potential joint ventures and strategic partnerships. Those partnerships could be with existing competitors looking to enter Canadian markets or similar niche players with loyal followers in regions in which they want to compete.

Consider how your customers are interacting with your brand and know what they are saying about it. A solid marketing strategy including social media and a unique digital experience for the consumer can help Los Cabos expand its client base, regardless of location headquarters. Technology can provide that competitive advantage over larger companies in the market.

Yorkville Sound has been active in the U.S. market for most of our company’s 50-year history. In our case, we always have, and we continue to, manufacture most of our key products here at our Pickering factory. We talk about that, and make it a key part of our marketing strategy.

When so many of our competitors have abandoned North American manufacturing in favor of China, Vietnam, Indonesia or elsewhere, “made in Canada” means something – not only here, but in the U.S. When consumers there can’t necessarily find a made-in-the -U.S. product in our categories, “made in Canada” is “made in North America,” and the reality is that carries all of the quality, warranty and support implications that made-here versus made-overseas implies. In our case, we put that “made in Canada” right up front on our key flagship products, and use that to our advantage.

Look for ways to differentiate your product – it might be the only way to gain an edge among competitors.

Forming joint ventures and strategic partnerships can help you better target a market.

Double down on ‘made in Canada’

It also should help in the United States among consumers who want quality goods.