The Risk Takers series looks at how a few of Canada's creative minds fearlessly went their own way.

Seven years after starting development on travel site Hopper, founder and chief executive officer Frederic Lalonde realized people weren’t really interested in the initial product. But the development process included parsing through masses of data, and it was this burgeoning field of Big Data that allowed Hopper to take off as the product it has morphed into today.

Hopper has become a big data-driven website that analyzes billions of flight prices to help travellers figure out where to fly – and when to buy their tickets.

A view of Shek O, a village on the south-eastern part of Hong Kong Island, taken by Hopper editorial staffer Dakota Smith. The original idea of the travel site was to curate travel information from millions of travel blogs through complex algorithms. (Dakota Smith)

By his own admission, Mr. Lalonde hasn’t done much that doesn’t involve startups. He co-founded Newtrade Technologies, which provided software and integration services to hotels, in 1997. Less than two years after securing its first round of funding, he sold Newtrade to Expedia Inc. for an undisclosed amount, went snowboarding for six months, then started it all over again with Hopper. “Most of us who stick with this [startups] do it because it’s an illness or a religion or something,” he says with a wry laugh.

“Asking an entrepreneur about risk is a bit like asking a logger, ‘Tell me about a time that you cut down a tree.’ If you asked me to describe a time that was a make-or-break moment for a startup, I’d tell you that was Tuesday.”

Some Tuesdays, he admits, are more dramatic than others. Case in point: the pivot. “That’s when you realize that what you’re about to do, the whole thing you’ve invested all those years in, isn’t going to work. It’s that Hollywood moment of ‘What are we going to do now?’ And at Hopper we went through a pretty scary pivot.”

Frederic Lalonde, founder and CEO of Hopper, in the Montreal office. The company had been in development for almost seven years when one article about an obscure part of their website, caused Mr. Lalonde to completely rethink its direction. (Christinne Muschi for The Globe and Mail)

Hopper’s pivot happened in May. The company had been in development for almost seven years, and had attracted about $22-million in funding from the likes of OMERS Ventures (the venture capital arm of the Ontario Municipal Employees Retirement System, one of Canada’s largest pension funds), Brightspark Ventures and Atlas Venture. Money wasn’t the problem. Hopper’s problem was its product.

The company was using complicated algorithms to aggregate content from half a billion travel-related blogs. Hopper users, who maybe didn’t know exactly what they were looking for in a holiday, would input their own criteria – such as, “Where can I fly that has a good beach and hiking, and costs less than $300 a ticket?” – and benefit from the collective experience of other travellers.

“It seemed like a good idea,” Mr. Lalonde says. “It seemed like something people would be interested in. But it turns out they’re not. We worked for years on this problem. It was working to a degree but not to the expectation of the money we’d raised.”

The entry to the Jaisalmer fort in India. Hopper founders thought readers wanted a service where they could ask a vague question when planning a trip and get specific answers based on information derived from millions of travel blogs. The company had raised about $22-million in funding by the time they realized they weren't getting the kind of interest in that kind of service that they had hoped for.  (Dakota Smith/Hopper)

As a side project, Hopper programmers had been diving into big data. “We’d produce these really dense technical reports, as a way to get our brand known with data-driven journalists. Buried among the thousands of things that we did, on a hidden part of our site, there was one page with very obscure, data-driven reports that told you things like: What were the cheapest days to travel? Was it better to be shopping for tickets on certain days? Those PDFs were never intended to be seen by a traveller.”

But Seth Kugel, the New York Times’s Frugal Traveler columnist, saw those PDFs – and he published a story about Hopper on April 29: “Crunching the Numbers to Find the Best Airfare.” Commence the pivot. 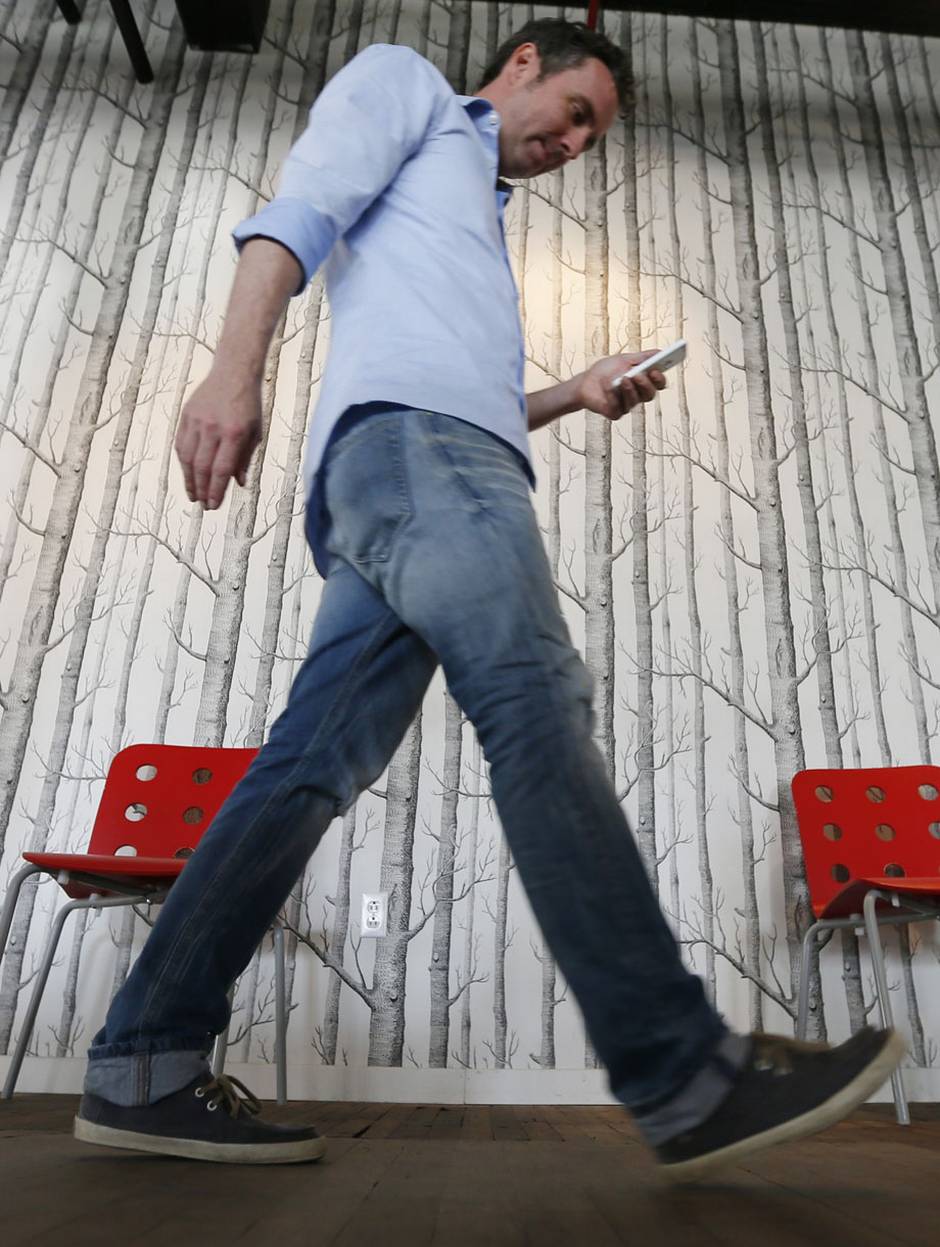 As a side project, Hopper programmers had been diving into big data, producing obscure technical reports, such as what are the cheapest days to travel. After a New York Times columnist wrote about this, Hopper CEO Mr. Lalonde checked the site's analytics on his phone." Overnight, we ended up doing a hundred times the traffic we’d done for the last four years," he says. As a result, the company completely rethought its product. (Christinne Muschi for The Globe and Mail)

Two days later, Mr. Lalonde was walking through Boston’s Copley Square, “doing e-mail, as most of us do,” on his way to Hopper’s office in Cambridge. A message arrived from Brianna Schneider, Hopper’s media relations manager. The subject line: “We’re famous.”

At that very moment, Good Morning America was running a segment about the New York Times article. “As every good data geek would do, I switched to our data analytics on my phone,” Mr. Lalonde remembers. “We had 3,800 people on our site. We were twice as big as Expedia for that hour, and they’re a $10-billion company. By the time I got to the office, all the talk was about keeping the servers up – and getting that obscure PDF onto our homepage.”

Mr. Kugel’s article become the second-most e-mailed story on the New York Times Web site, and that was just the beginning. “That obscure PDF was trending in South Africa, Japan, Belgium. There were articles in Arabic that we couldn’t read. Overnight, we ended up doing a hundred times the traffic we’d done for the last four years. Over a million users came in three weeks.

“One of the most surreal things that happened was a reporter for a local TV station in Florida printed out the PDF and took it to the beach. All these people in their forties and fifties were reading these bar charts: ‘Oh, if you shop on Tuesdays, you can save $20.’ I’m not sure if they understood what all the data was saying, but they thought they did – and that’s part of the appeal of a product like this. It makes you feel smarter, it makes you feel like you’re one-up on the airlines.”

The catch: That appealing product wasn’t what Hopper was selling. But maybe, Mr. Lalonde wondered, it should be.

“So now I’m staring at this one thing, that wasn’t even intended to be a product, and realizing it was probably the future of the company,” he recalls. “That means that every corporate structure, every job definition, half of our tech, R&D – everything was potentially up in the air. Was the right decision to lay all that to waste? Or was it all a ridiculous fad? This was the decision we were faced with at the beginning of May: Do we scrap $20-million of investment because of some PDF that people were printing out and reading on the evening news?”

Mr. Lalonde brought the problem to his people. They were just as uncertain as he was. One of his three investors said stay the course. The other said go for it. The third didn’t know. Then he talked to Hopper’s staff. “When you have good people who have been working on this for years, and you ask them, ‘Should we change this?’ you’re going to get every possible reason not to do it. Nobody had a clear path. The environment was extremely chaotic.”

Mr. Lalonde thought about his dilemma for three weeks. Could this new approach make money? Was it worth making such a radical change?

From right, Hopper's founder and CEO Frederic Lalonde, developer Philippe Laflamme and co-founder and CTO Joost Ouwerkerk in the Montreal offices. The company refocused its product to offer travel reports based on crunching through masses of data.  (Christinne Muschi for The Globe and Mail)

He decided that it was. Mr. Lalonde laid off half the company, including most of the Canadian office. “That was particularly hurtful,” says the Quebec City native. “Layoffs are never fun. Startups are built gradually, but destroyed very quickly. That’s probably the most stressful part of running a company like this.”

“If you listen to the customer, if you see what customers are doing with your product or service, that’s how to build great companies,” says Kent Thexton, managing director of OMERS Ventures and himself a seasoned startup veteran. He joined the Hopper board a few months before the pivot. “As the CEO of a startup you need to do two things simultaneously: You need to be incredibly focused on your business and your team, but at the same time you need to be scanning for that white space in the market, that area that you can fill better than anyone else. Great CEOs seize on those opportunities.”

Four months later, as Hopper prepares to launch its mobile app some time this fall, Mr. Lalonde reports 40-per-cent growth every month, and about 600 monthly media hits in the U.S. alone. But the reason he’s confident that Hopper made the right pivot is because everything just feels right.

“This is hard to explain,” he says, “but once you actually restructure the company, you can feel when things are off or not. The environment magically reacts to the right focus. It’s a very strange thing. You get a sense that you’re on to something big. At Hopper, the conversations became so much more focused. Everybody started having really good ideas about predicting whether the price of airfare was about to go up or down, or giving you the best time to buy, or ways to track the change in air fares and notify you on your phone. We ended up building all those things, and that’s the product we’ll be releasing in the fall.

“Startups are long walks in the desert – and then something changes and it never goes back.”