Alexander Alexakis is praying for a resolution to the Greek crisis. As a Greek-Canadian, he sympathizes with the Greek people, who are "paying the price for the politicians' mistakes." But as the vice-president of Krinos Foods Canada in Concord, Ont., he's also worried about the impact the uncertainty and lack of liquidity in Greece will have on business. Krinos sources 90 per cent of its products, including feta cheese, olives, olive oil and roasted peppers, from beleaguered Greece.

"I've been dealing with Greece for many years now and I know that anything can stop the flow of goods, including an election or a strike," says Alexakis. "So we are prepared. We carry quite a bit of stock."

But, while Alexakis says he can do without shipments for two or three months without suffering unduly, he's concerned about the impact of capital controls on his suppliers. In a bid to prevent the country's banks from collapsing, Greeks are limited to removing €60 daily from bank machines, making it difficult to pay for labourers, transportation and packaging.

Certainly, Greece's leftist government seems to be working out the details of capital controls on an ad hoc basis – it recently made concessions allowing retirees without bank cards to withdraw a limited amount of cash from banks. But so far, says Alexakis, no one in the government has specifically dealt with the impact of capital controls on businesses. Some of his suppliers have asked him to suspend payments because "they cannot access the capital."

Alexakis says his suppliers are understandably nervous. "They've never had a situation like this before," he says. "They don't know how to explain it. They don't know what to expect. Will there be a last-minute negotiated agreement and then things will go back to normal? We don't know. And what will be the result if the referendum [on accepting the bailout terms imposed by creditors] is negative?"

For Diane Kiparisas, a consultant with Skyway Tours Ltd. on Toronto's Danforth Ave., the uncertainty is prompting a lot of questions from clients. Skyway sells most of its flights and package tours to travellers going to Greece. "We haven't noticed a drop in bookings," she says, "and we've only had one cancellation, but they're calling and asking questions about how they're going to access money."

Nonetheless, Kiparisas says Skyway's suppliers in Greece have reassured her that it's business as usual for tourists. A recent email from Athens Express, a tour operator Kiparisas works with, states: "As you may all be aware by now, capital controls have been imposed on Greek account holders. These caps do not affect tourists. They will still use their debit cards and withdraw funds from the ATM machines with no limits." It goes on to note that a majority of businesses focused on foreign travellers are accepting credit cards. "Everything is operating as normal," says Kiparisas. "And that's what we're telling people."

That doesn't surprise Peter Hall, chief economist with Export Development Canada (EDC), a crown corporation that provides Canadian exporters with financing, insurance and bonding services. When things are going wrong in an economy, it's a "very dangerous time for businesses associated with that market," he says. Mistakes can happen and cash can get trapped, even when it doesn't seem logical. But even so, Hall believes that ensuring the flow of cash into the country is likely to be a priority for Greece.

"The last thing you want to do in a situation like that is to bite the hand that feeds you," he says. "If foreign exchange is coming into the economy because outsiders are buying Greek products, they will do everything that they can to make sure those money flows continue. That is life blood for the economy."

Hall concedes that if Greece is unable to strike a last-minute agreement with its creditors, it could be headed for an exit from the Eurozone. "Obviously if you're a business with direct exposure too Greece, what's happening is a big concern," he says. But he believes the signals point toward a resolution of the Greek crisis that will avoid a Grexit. In the last few days, "Greece has blinked a few times," he says. "It's all about positioning themselves appropriately for a negotiation."

As for Alexakis, he remains glued to the television screen. But he's cautiously optimistic. "I don't anticipate they're going to destroy the only industries that work in Greece," he says. "Food exports and tourism are the main breadwinners, so I'd be surprised if they do anything to harm these things."

Effects of cash crunch spread as Greeks worry about basics
May 15, 2018 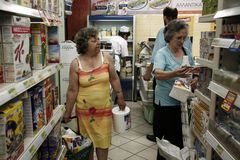 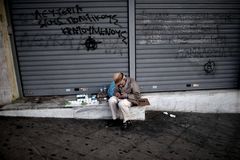