Mohammad Alftih fled his war-torn hometown of Aleppo, Syria, with his wife and four children, living in Lebanon before coming to Canada under private sponsorship. Eleven months after the Alftihs arrived in Peterborough, Ont., they opened a new restaurant downtown.

"Canadian people, they came and came and came," says Mr. Alftih, describing the opening of his new business in December, 2016. "They encouraged me and supported me. For that reason, I did well."

Margaret Wente: Syrian refugees: the romance and the reality

Across Canada, Syrian newcomers-turned-business owners are finding their footing. Some entrepreneurs, like Mr. Alftih, have opened storefront businesses, while others continue to build them out of their basements or local markets.

Between November, 2015, and January, 2017, 40,081 Syrians arrived in Canada. Entrepreneurship can be the path of least resistance for those newcomers, says Alex LeBlanc, managing director of the New Brunswick Multicultural Council, which has overseen the province's resettlement efforts of government-assisted refugees.

"If you come and your credentials aren't recognized, there's a language barrier, employers are reluctant to hire you, then starting and running your own business can be a great way to earn a living," he says.

For Mr. Alftih, entrepreneurship is the only career path he knows. In Syria, he operated a printing factory that specialized in clothing for European markets, and, before that, an export business. He didn't see opportunities for similar businesses in a city of Peterborough's size, so looked to other industries.

Mr. Alftih's partner in the restaurant is a university professor he met at his mosque. The business would not be possible without that encouragement and financial backing, Mr. Alftih says, as well as help from Safe Haven For Refugees Peterborough, a group of 15 people who privately sponsored the Alftih family.

Starting a new business in a new country poses particular challenges, as Rita Khanchat discovered. A broadcast engineer in Aleppo, Ms. Khanchat came to Calgary under private sponsorship and quickly started a catering company. But the venture stalled at the start of this year, Ms. Khanchat says, because of the expense of using a commercial kitchen. "We are looking for a new commercial kitchen, and maybe after a while if we find a good one and have sponsors, we can start again."

Another barrier to entrepreneurship, says Mr. LeBlanc, may exist for Syrian refugees who are now receiving social assistance from the province. Some government-assisted refugees have made the transition from federal support, received for their first year in Canada, to provincial income assistance, which carries different rules for allowable earnings.

"I'm aware of some situations where families or individuals started a business but found the clawbacks were prohibitive for self-employment," he says.

For the Alhishan family, who arrived in Fredericton as government-assisted refugees in January, 2016, selling food one day a week at The Cultural Centre's market has led to new opportunities. For nearly a year, Fawaz Alhishan, 21, has sold food every Saturday with his two brothers and father. His mother, Suphieh, cooks for the business, named Suphieh's Taste of Syria. The food stand has helped his family practise English, Mr. Alhishan says, and also led to a part-time job for him at The Cultural Centre.

"One day maybe we'll have a restaurant; I hope so, but it's a long time away," Mr. Alhishan says.

In Calgary, Syrian refugee Mona Bassaj continues to run her year-old business, Designs by Mona, out of her basement.

"It's going well and slowly but surely I'm growing," says Ms. Bassaj, speaking through a translator.

Ms. Bassaj owned and operated a small sewing factory in the suburbs of Damascus, Syria, with her husband, before arriving in Canada in January, 2016, privately sponsored by Ms. Bassaj's sister. Ms. Bassaj works full-time at her business. She recently connected with a fabric-store owner looking for a seamstress, which has led to sewing dresses for brides and bridesmaids. The biggest obstacle, Ms. Bassaj says, has been learning a new language. She's taking English lessons once a week, but still relies on her sister for help communicating with clients.

In Hamilton, a creative partnership is behind a growing catering company, called Karam Kitchen. The business was co-founded by Brittani Farrington, an American who has lived in Hamilton since 2015. When the church Ms. Farrington attends offered to throw a welcome dinner for government-assisted refugees, three Syrian women Ms. Farrington had befriended insisted on cooking the food.

"They saw everyone devouring the food and loving it," Ms. Farrington says. "Those women asked me how they could sell their food in Canada, and that is what sparked the business."

Ms. Farrington, who has previous experience in restaurant marketing, partnered with the three budding chefs and launched a Kickstarter campaign to cover Karam Kitchen's initial operating costs. The July, 2016, campaign met its goal of $6,500 after three days, and ultimately raised $17,406. A recent Kickstarter campaign raised $25,748 for a delivery van. Today, Karam Kitchen employs five Syrian women as part-time chefs, as well as an operations director and Ms. Farrington, the administrative director. Everyone earns an hourly wage of $12.50.

While Canadians are helping Syrians launch and run businesses, some Syrians are starting philanthropic ventures of their own, aiming to help others as they have been helped.

Reham Abazid has raised nearly $4,700 since January, by organizing monthly markets to sell food and crafts in Saint John. The money will go towards purchasing sewing machines for widowed refugees in Jordan, so the women have a way to support themselves and their children, Ms. Abazid says. Ms. Abazid spent 3 1/2 years in Jordan, after she left Daraa, Syria, with her husband, young son, and 18-day-old daughter. The family arrived in Canada as government-assisted refugees in January, 2016.

"I know how difficult it can get [in Jordan]," she says, speaking through a translator. "I already have so much help and am doing so much better that I can now give assistance to those who are still having difficulties." 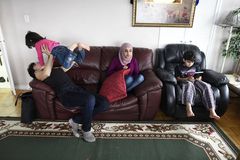 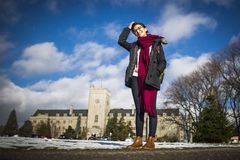