Author William Gibson once made an observation that just keeps on giving. "The future is already here – it's just not very evenly distributed," he said, noting that any kind of advancement occurs in isolated pockets before spreading to the general population.

As a writer, Mr. Gibson is typically preoccupied with issues of cyberspace and consciousness, but his idea is just as applicable to the more workaday question of how to spread an understanding of the future throughout an organization.

If you're trying to bring your business up to speed on online technology, you might find that, instead of having to look to outside agents such as colleges or business schools, the future has already arrived at your firm – it's just not very evenly distributed. Younger workers on your staff have knowledge that could be shared with the whole firm.

In management circles, it's known as "reverse mentoring," turning the idea of the old teaching the young on its ear. New graduates have always come into the workforce armed with the latest techniques, but now the effect is more pronounced than ever: Having grown up in the online world, new hires aren't just bringing in skills they've learned in school, but attitudes and mentalities they've lived every day of their lives.

Of course, learning from youth is easier said than done. How can this nifty idea become a useful reality?

One famous approach was championed on a grand scale by Jack Welch, the former chief executive officer of General Electric Co., who ordered 500 executives to pair themselves up with a younger employee, who would teach them to surf the Internet, which, itself, was a novelty at the time.

You don't have to be a corporate behemoth to make such a system work. Even in smaller organizations, giving younger workers one-on-one time with their seniors can be a mutually beneficial arrangement: Seasoned managers get not only training but a new perspective that might not have otherwise worked its way up the company hierarchy. Their younger partners, meanwhile, get one-on-one time with their bosses, and can gain a sense of recognition of their value to the organization.

Teachable skills have also evolved since a twenty-something taught Mr. Welch to surf. Younger workers today might wind up teaching their bosses about how youngers consumers make buying decisions, the ways of Twitter, or the culture of Reddit.

Of course, merely setting up such an arrangement doesn't guarantee success.

"The actual matching of junior employees with senior employees needs some strategic thinking," says Danielle van Jaarsveld, an associate professor at the University of British Columbia's Saunder School of Business.

Teachers and students alike could see downsides if there's a personality mismatch. Young mentors need to recognize boundaries and treat their bosses with respect, and bosses need to check their resistance to being instructed by a whippersnapper in a field that – especially where it comes to social media – they might not have a world of enthusiasm for to begin with.

To keep the process on the rails, Prof. van Jaarsveld suggests making sure that the mentoring process is being coordinated by a third party, with whom both the reverse-mentor and reverse-mentee can check in.

A more fundamental approach is to step beyond one-on-one training, and to involve the whole company in the process of disseminating knowledge.

Raymond Pirouz, who teaches new-media marketing at Western University's Richard Ivey School of Business, says that, rather than trying to curate individual learning experiences, the best way to spread younger employees' know-how throughout an organization is to adopt a more collaborative working approach in general.

One tool that can help in this approach is social workflow software like SocialCast or BaseCamp, groupware that takes cues from social media, which Mr. Pirouz says can have a "humanizing effect" on the workplace.

But that's not to write off the real world as a venue. Mr. Pirouz suggests that a small business might take its entire staff – top to bottom – to a new-media conference for a week, asking them to take individual notes, meeting back as a team to discuss which ones work best, and proceeding from there. This kind of process builds younger employees' feedback into a process where re-evaluating the way the firm does business isn't an unwanted intrusion on day-to-day work, but the point of the exercise.

"You have to see your organization as a community," he says, noting that the idea of going to hang out at a conference as a team would be a challenging proposition for some firms. "It sounds simplistic, but it's not." 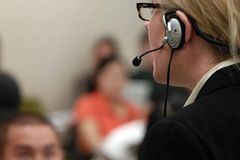 Three ways your business may be falling behind
May 28, 2012 Ten steps to manage personal devices brought to work
May 21, 2012 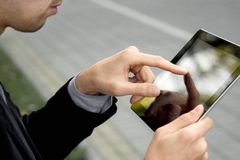 Young aren't only ones bringing own devices to work
May 7, 2012 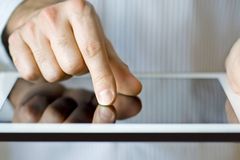 Mixed blessing when employees bring their own devices to work
April 30, 2012 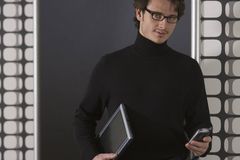