Many small-business owners in Alberta are bracing for the dramatic hikes to the province's minimum wage, saying they will squeeze their operations when they can least afford it.

While other provinces are opting for incremental increases to their minimum wages this year, Alberta boosted the minimum wage to $12.20 from $11.20 on Saturday.

That will make the province's minimum wage the highest among the provinces, and marks the second raise in two years as Alberta moves toward $15 an hour by October, 2018. The lower minimum wage for wait staff who serve liquor will also be eliminated.

It comes at a time when Alberta's economy is reeling from a two-year downturn in oil prices that has forced tens of thousands out of work and ratcheted up financial stress levels in what was once the wealthiest province in the country.

The NDP government maintains the change will help more Albertans afford the necessities of life such as groceries and rent. Some workers who now earn minimum wage say it will be transformative.

"It's a small but appreciable improvement in my quality of life. And I imagine for people in retail it will be life-changing," said Christopher Munroe, who waits tables at a family restaurant in Calgary.

"I took my first vacation in 3 1/2 years a month ago, and a good portion of it was the last raise in minimum wage," said Mr. Munroe, who also earns tips.

For Danielle Merriam, a bartender at a Calgary pub, the $1-an-hour raise this month will help a little. But she says that even at $15, the rate in two years, it will be hard to make ends meet. The 31-year-old single mother lives in housing subsidized by the Calgary Urban Project Society and said you need two incomes to live in the city.

Just under 3 per cent of Alberta's labour market earns minimum wage, compared with 10 per cent in provinces such as Ontario.

But over four years, Alberta's minimum wage will jump by nearly 50 per cent and reach the highest in the country. The last time Alberta raised the wage it was only a 25-per-cent increase to $8.80 over the 2005-to-2009 period.

Contrast that with other regions that raised their minimum wage on Saturday. Ontario moved up by 15 cents to $11.40 an hour. Saskatchewan climbed 22 cents $10.72 and Prince Edward Island increased it by 25 cents to $11.

Alberta's move to $15 an hour will affect a much bigger swath of the labour market and include workers like Ms. Merriam, who are in their prime working age of between 25 and 54.

"When you make a minimum wage change this big, the changes are much more widespread. It is going to spread out into the way the economy operates," said David Green, an economics professor with the University of British Columbia's Vancouver School of Economics. "You are moving the minimum wage up to a place where it is going to affect much more of the working poor," he said.

Nearly 20 per cent of Alberta's work force earns $15 an hour or less.

But the wage hikes come at a difficult time for Alberta's labour market. The unemployment rate is stuck above 8 per cent. Nearly 50,000 private sector jobs have vanished since oil started to plummet two years ago. The elimination of thousands of high-paid positions has had a knock-on effect on the hospitality industry, which has the largest share of minimum wage earners.

Restaurants are contemplating ways to mitigate costs, such as mandatory gratuity charges and raising prices.

"It's not just the minimum wage that goes up. Everyone in the kitchen wants more because they are seeing servers make more," said Leslie Echino, owner of Blink Restaurant and Bar in Calgary.

Ms. Echino's high-end restaurant employs 26 full-time employees, nine of whom are servers earning minimum wage. Ms. Echino, who provides her employees with benefits, is also frustrated with the rising expenses including a new carbon tax on fuel.

When the province raised the minimum wage by $1 to $11.20 last year, Ms. Echino said she had to cut her staff's hours by up to 10 hours a week. She expects to reduce hours again after Saturday's wage hike.

So far, Statistics Canada data show there is no correlation between increasing the minimum wage and job losses in the industry.

Since 1999, the minimum wage in Alberta has increased 11 times. Over that period, the data show both job creation and employment losses. "There's no clear reaction in the labour market," said Andrew Fields, a labour analyst with Statscan.

But small businesses and some economists expect the hike will lead to job losses. Two-thirds of accommodation and food services industry workers earn $15 an hour or less, which means the increase in the minimum wage could push some employers to cut costs by eliminating positions.

Other restaurant owners such as Paul Shufelt said the higher minimum wage means he will probably have to hire one person to do the work of two – such as a cook who can also clean dishes – instead of hiring a cook and a dishwasher.

Mr. Shufelt, owner of The Workshop Eatery restaurant in Edmonton, employs 30 people, four of whom earn minimum wage as dishwashers. He said the rising costs would "make us take a hard look at our pricing."

Craig Alexander, chief economist with the Conference Board of Canada, said the move will help workers who earn the minimum wage because it will boost their income.

"But raising it will make it more difficult for the unemployed to find positions at minimum wage because there will be less hiring at minimum wage," Mr. Alexander said. "It is a tradeoff."

Cassandra Wattenbarger, 23, earns the minimum wage working at a Red Deer, Alta., car dealership. She had $3.78 in her bank account on Friday ("you can't even buy a Tim Hortons coffee with that") and was looking forward to the increase.

"The increase is good for individual people. I think it's a terrific idea. It sucks for a few businesses," she said. 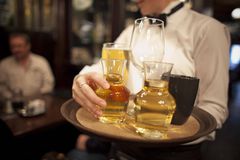 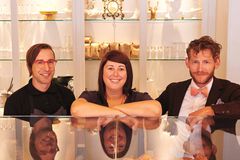 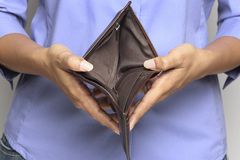 Follow Rachelle Younglai and Kelly Cryderman on Twitter @rachyounglai @KellyCryderman
Report an error Editorial code of conduct
Due to technical reasons, we have temporarily removed commenting from our articles. We hope to have this fixed soon. Thank you for your patience. If you are looking to give feedback on our new site, please send it along to feedback@globeandmail.com. If you want to write a letter to the editor, please forward to letters@globeandmail.com.
Comments