On April 9 last year, the Fraser Institute published a report that described Ontario's economic woes. With the second-highest debt in the country, highest annual budget deficit, and an average debt-to-GDP ratio of 38.6 per cent, Ontario, in the report's own words, is well on track to become Canada's own Greece.

The same worrisome trends can be found in most political jurisdictions in this country – provincial, federal and municipal. Canadian politicians will have to get creative and determine new and alternative methods for delivering infrastructure and other public goods while generating real long-term sustainable socio-economic benefits to its citizens.

The new federal government has promised to increase spending on infrastructure to stimulate an anemic Canadian economy. One way to supercharge this stimulus is to re-examine the way large infrastructure projects are evaluated. Companies that bid on public infrastructure are all eager to demonstrate why their bids are better than their competitors'. Unfortunately, the current evaluation system usually puts them in a race to the bottom where the lowest-cost bid wins; creativity in the socio-economics a bidder can bring with him to a project is deemed of little or no value to those evaluating a bid.

Governments must immediately expand the checklist used during an evaluation in a way that measures a bid's total value to society. Governments can utilize the best of the private sector's knowledge and resources to not only provide for future infrastructure requirements but also to create additional value in the form of badly needed public goods and services.

Businesses want to be able to compete in every way they can and have told us that. One way is to add long-term sustainable socio-economic benefits into their bids; projects that engage local suppliers, support startups and entrepreneurs, encourage innovation and small and medium-size enterprises (SMEs), and provide training. And the list goes on. Bidders are only limited by their imagination in the ways they can use their global connections to revitalize communities and generate employment opportunities. But, because governments evaluate bids within very tight parameters, companies cannot score points beyond compliancy with specs and low price.

This method of evaluation already exists in Canada for defence procurement. Recently, the federal government introduced changes to its procurement policy mandating that companies – foreign and Canadian – bidding on major defence projects be evaluated on the "value proposition" they bring to the Canadian economic and social landscape. While there has always been a requirement for companies bidding on defence work over a threshold value, usually $100-million, the new policy goes much further and now requires that companies be evaluated partly based on the quality of long-term sustainable benefits to key areas of the Canadian economy. Furthermore, it is not discriminatory and places all bidders – foreign and local – on the same level playing field.

Nicole Verkindt, founder of OMX, an online platform for Canadian companies to access international defence contractors with obligations to "buy Canadian," commented that "this policy is a powerful lever to stimulate investment into Canadian SMEs and innovation, but defence spending is lumpy and takes a long time to come to fruition. We should be looking at other areas of public spending that can be used to stimulate the Canadian economy – like the multibillion-dollar Gordie Howe Bridge to be built between Windsor and Detroit – particularly for SMEs, technology startups and aboriginal-owned businesses."

With purse-strings drawing tight and future spending uncertain, Canada cannot afford to ignore the opportunity to leverage all of the creative powers of the private sector to stimulate socio-economic development when spending public dollars.

Tim Runge is a principal of C&I Constructive Edge Inc., which has offices in Australia, Belgium, Canada, United States, United Kingdom and India. He has been involved with capital projects globally, both defence and civil, for almost 30 years. Constructive Edge is a corporate advisory for socio-economics associated with large public expenditures.

Aboriginal businesses can thrive if we provide the right incentives
January 15, 2016 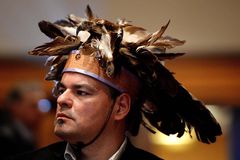