Like so many Canadians, I was at home last Wednesday night with my kids as I watched Andre De Grasse race to a silver medal in the men's 200-metre sprint at the Rio Olympics.

It was an exciting moment for all Canadians, one of many memorable moments our athletes authored in Rio. While my children have paid cursory attention to the Olympics in the past, there was something different about Rio 2016. We had watched bits and pieces of the Olympics before Mr. De Grasse's silver sprint in the 200 metres, but we hadn't really made a plan to sit down together for appointment viewing of any one event.

And yet both my kids were completely in thrall and up-to-date with how Canada's athletes were doing, because they had followed the Games almost exclusively through social and digital media.

Rio 2016 represented a real changing of the guard for Team Canada, with young athletes stepping up and taking centre stage – kicking off a youth movement that gives all Canadians hope for the future of sport in this country.

And while Canadian athletes were ushering in a new era on the field of play, back home, Canadians were turning to social media in record numbers to keep track of every race, medal and historic moment.

While it's easy to say that every new Olympics is the "most social ever," it's clear that younger generations, who were raised on social media, are consuming Olympic content and engaging with the Games via social channels at rates we've never seen before.

According to the Canadian Olympic Committee, Canadians were the most active Olympic nation on Facebook during the Games (as ranked by percentage of monthly active users). Canadians were engaging with Team Canada on Facebook and the Olympics even more than users in the United States or Brazil engaged with their own teams.

Team Canada and the COC kicked off the Road to Rio with the daring Ice in Our Veins campaign, which was designed to highlight the fact that even though our athletes were competing in the Summer Games, it's the training that happens in the winter months – and their exposure to the tough Canadian climate – that steeled them for victory.

Clearly, the campaign struck a chord with Canadians and built on the brand's ongoing momentum. Between the end of the London Olympics in 2012 and the Rio Games, Team Canada's Facebook "likes" grew 263 per cent to nearly 900,000; the @TeamCanada Twitter account grew by 1,505 per cent to more than 607,000 followers; and @OlympiqueCanada hit 28,000 followers, turning it into one of the most-followed French-language accounts in Canada.

And that momentum carried throughout the Games, with Team Canada utilizing a strategic team of content creators to populate social channels with photos and videos for Canadians to celebrate. They used Facebook Live to forge connections with everyone back home, with more than 8.5 million Canadians tuning in through the first 10 days of the Games.

Of course, it didn't take long for the youth movement in Rio to get started, with 16-year-old Penny Oleksiak capturing the hearts of the country with four medals, including a gold, in the first week of competition. Not only was Ms. Oleksiak honoured as Canada's flag-bearer for the closing ceremony, she was also the most-mentioned Team Canada athlete on Twitter.

Whether it was Ms. Oleksiak tweeting about her inability to score tickets to a Drake concert despite her Olympic success, Mr. De Grasse posting photos of his 4x100-metre-relay "squad" or Ms. Bouchard using Instagram to document her entire Olympic adventure to her more than one million followers, Team Canada athletes used their social channels to help Canadians experience the Games through their eyes like never before.

Just as social media has enabled professional athletes to break down the barriers between players and fans, the ubiquity of social media is now changing the way a new generation experiences the world's largest multi-sport event.

As we've seen in other areas, social media has had a democratizing effect on how Canadians can experience the Olympics. It wasn't that long ago that the world watched the Olympics as prepackaged programming, with television networks editing together the highlights of the day's events for primetime viewing. The emergence of digital media channels helped push networks to cover more events live, and now the rise of the social and mobile Web is further changing our relationship with the Olympics.

No longer are Canadians experiencing the Games solely through the lens of official broadcast partners or national Olympic organizations, but through the eyes and voices of the athletes themselves. And for young generations of Canadians, that's going to change how they experience the Games for years to come.

Debate continues over whether Olympic medalists should be taxed
August 18, 2016 How business can learn to own the podium
Subscriber content
August 23, 2016 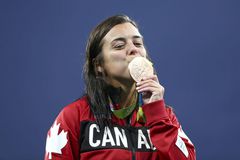