This marks the launch of a new series called The Splurge, where we take a look at how entrepreneurs have spent their money on indulgences -- purchases that may be interesting, fun, satisfying or enjoyable, but not necessary!

After 12 years of organizing events for everyone from anxious brides to Hollywood stars, twin brothers Jian and Page Magen consider their collection of legendary bad boy soul singer James Brown's sequin-studded jumpsuits and silk pyjamas a prized symbol of their business success.

Jian Magen, who co-owns Markham, Ont.-based Magen Boys Entertainment with his brother, met Mr. Brown at one of his concerts in Ottawa in 2001. He and Page went on to become friends with him and members of his band.

When Mr. Brown's personal possessions were auctioned in July, 2008, after his death, the Magens were in the front rows at Christie's in Manhattan, bidding for whatever they could get their hands on.

They spent $20,000 and came home with a keyboard and 10 pieces of clothing, including a black glitter bathrobe, the red suit Mr. Brown wore on the cover of his 1984 concert album, Soul Jubilee, and purple silk pyjamas embroidered with Mr. Brown's famous Godfather of Soul insignia.

"It was surreal. We felt we were acknowledging how important he was to music and the culture," Page Magen said as he laid out the pieces in his North Toronto living room.

"It shows our showmanship and appreciation of the business," Jian added. "We started from nothing and worked our way to a point where we could buy excessively flashy suits that we never wear."

As they tell it, the Magens' fascination with showmanship has fuelled their careers ever since they took on their first jobs as 10-year-old newspaper delivery boys. At 12, they were buying and selling sports cards at a flea market in Mississauga.

Then, at 16, they used the $5,000 they had earned to purchase a full-size wrestling ring, which they set up in their driveway so that they could stage wrestling matches to entertain the neighbours. At the same time, they earned a reputation as high school party promoters.

"We would go to a high school and stage a stunt, maybe we'd argue with each other or someone in our entourage, and then, when people started to gather around, we would reach into our jackets and pull out these flyers for the next event," Jian said. "Pretty soon we were known as the city's most notable party guys."

Magen Boys Entertainment, which they set up in 1999, draws on that flare. The company has 10 full-time staff and organizes about 1,000 events a year – everything from bar mitzvahs and weddings to galas and corporate fundraisers.

"Whatever someone's dream is, we try to fulfill it," Page said. "If you and your new wife want to be shot out of a cannon on your wedding day, we can do that. If you want Dennis Rodman at a basketball party, we can do that, too."

Magen Boys Entertainment was in its infancy when the Magens' friendship with Mr. Brown started.

Jian was in the front row with some friends for Mr. Brown's performance at the Ottawa Blues Festival and scored an invitation backstage to meet the band after the concert.

In 2004, when Mr. Brown was in Toronto to perform at Massey Hall, he asked the Magens to organize a private party at Toronto's Silver Dollar Room, one of the city's premier blues clubs.

After that, they arranged parties for the singer when he was in town. Page travelled with the band for a week in Europe and, three years ago, members of Mr. Brown's horn section played at his wedding.

The Magens say they didn't hesitate to book a flight to New York when they heard that Mr. Brown's personal possessions were to be auctioned, but were surprised at how low the bids were.

The Magens' purchases have so far stayed hidden away in their neighbouring homes, brought out only occasionally for show. They've each worn one of the jackets just once, to an event they organized. They plan to eventually put them on display in cases in their office.

"I think it's a riot," Jian said. "I have James Brown's bathrobe and pyjamas, and how many people can say that?" 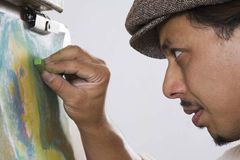 In Pictures: The Magen brothers and their James Brown collection
Gallery
May 13, 2011 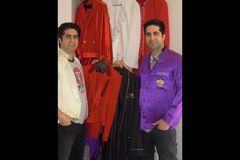