The Toronto 2015 Pan/Parapan American Games may be three years away, but small business owner Julie Kaye is already strategizing about how to score big.

The founder and chief executive officer of TBD Telecom by Design Inc., a small Toronto-based telecommunications firm, is hoping to earn a juicy contract or two from the sporting event, where there will be 36 sports, drawing 8,000 athletes from 41 nations.

She's discovered, for instance, that several of the venue sites will be close to her company headquarters, in Toronto's Liberty Village, which she hopes will be a competitive advantage.

And while her firm is small – with 10 employees – she's open to putting together a partnership with larger firms to jointly bid on cabling, wireless Internet, voice-over-IP phone service or other telecommunications services for the Games.

"We're really excited to participate in any way," she says.

Of the $700-million earmarked for operating expenses in the Games' budget, about $350-million in procurements will be up for grabs by companies including small businesses like TBD, says Barbara Anderson, chief financial officer of the Games' organizing committee.

She expects the majority of vendors up for the selection process will be smaller businesses in and around Toronto, for, she says, the Games will give preferential treatment to local companies in the city and the Greater Golden Horseshoe area.

Since Pan Am Toronto 2015 incorporated in 2010, 65 contracts have already been awarded, she says, for work in areas ranging from legal services to sponsorship sales, printing, translation, employee recruitment, public relations and more. The vast majority have been awarded to Ontario companies, especially in Toronto, but have gone further to companies in western Canada.

Opportunities over $100,000 are open tender and posted via Merx.com, an online tendering system for government-related procurement opportunities. Anyone can apply without invitation.

To win procurements under $10,000 – maybe the easiest option for smaller companies – staff from Toronto 2015 search their database of registrations to select possible candidates.

That's why it's critical for companies to register with the Games via its website. At the moment, about 1,100 companies have done so. The vast majority are in Ontario, but a handful are from the rest of the country.

To increase chances of being noticed, companies should be very clear about the nature of their business and services, so they aren't overlooked, Ms. Anderson says.

And when companies register on the site, they have an opportunity to declare their diversity. Companies owned by first nation, visual minorities, women, and those in the lesbian, gay, bisexual, transgender and queer (LGBTQ) communities will be given priority in the selection process, she says.

To encourage these companies to apply, Toronto 2015 has created a supplier diversity advisory council. "It's a fragmented market out there and we really wanted to have a vehicle to extend these opportunities into these communities," she says. The organization hasn't set any targets, in terms of the percentage of diverse companies they'll work with, but about one-third of suppliers so far awarded fall into this category.

To be small-business friendly, many contracts will be broken down into smaller opportunities that multiple companies working in the same area can provide, she says. The Games will also create opportunities for smaller companies to partner with larger firms on bids.

"This is what we want to leave as a legacy: sustainable networks and partnerships that live beyond the Games," she says.

In addition to contracts, sponsorship opportunities are also available; Toronto 2015 hopes to bring in $110-million in sponsorship money. This includes traditional cash contributions in exchange for branding opportunities, as well as value-in-kind contributions, such as free or heavily discounted products or services.

There are other ways to find opportunity beyond the "low-hanging fruit" of contracts and sponsorship, says David Soberman, a marketing professor at the Rotman School of Management at the University of Toronto.

He points out that the Pan Am Games will provide plenty of unofficial avenues for business. Retailers, for instance, might plan to set up shop near one of the venues. Hospitality businesses in the city, especially those close to venues, should strategize ways to capitalize on the influx of people who will be coming to town. "There's no substitute for creativity," he says.

Stacy Hall, owner of Justin Stitches Inc. (recently rebranded as Make), took a creative tack when the Olympics landed in Vancouver in 2010.

With a location on Granville Island, not far from one of the venues, she was able to draw crowds with a Canadiana-themed storefront. Inside the 3,000 sq-ft store, she built "Toqueville," a fictional town featuring a frame of a log cabin and fir trees. "We found people were coming back and bringing their friends," she says.

On the store's website, staff posted photos of visitors posing in quirky toques on display in the shop.

In addition to this, Ms. Hall hired a public relations consultant to help spread the word about Toqueville and gave a 10-per-cent discount to Olympic volunteers. "They shopped in our store like crazy because word got around among the volunteers," she says. Additionally, when Olympic tourists asked the volunteers about things to do and see in Vancouver, they'd often refer Ms. Hall's shop.

Her strategy paid off in spades. In February, 2010, the month the Olymics were held, the shop's sales were 11 times higher than normal for that month, and they remained about 25 per cent than usual over the next six months, she says.

Instead of going through the request for proposal (RFP) process, it approached large event sponsors, like Coca-Cola Co., Nestle SA's Power Bar and Visa, to earn contracts, says co-founder and director Amelia Ufford.

"When companies come into a city for an event, they build a lot of branded assets," she says. To protect a company's brand, these assets must be stripped of their logos and then securely repurposed or recycled. Debrand managed the disposal of the waste products for several companies during the teardown of venues at the end of the Games.

Being contracted by big-name corporations was a reputation booster for the company, which opened its doors just months before the Olympics began in 2010, she says. "Having that opportunity so early gave us the credibility we needed." Since then, the association with global brands has made it easier for the company to find clients, she says.

Ms. Kaye, for now, plans to focus on the official channels and submit a strong RFP. Since the company's done work for municipalities and school boards, she's familiar with the process. "It's a lot, on top of your regular business, but we've been able to streamline the process," she says.

Regardless of the extra work, she knows the payoff could be big.

"To say we were a vendor of record with the Pan Am Games would be great." 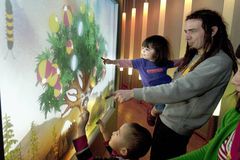 Go-Go Gymnastics vaults ahead with mobile setup
May 11, 2012 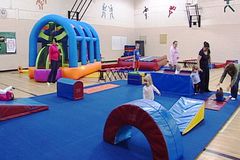 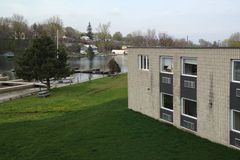