In his workshop near the Tobique River in northern New Brunswick, Bill Miller lovingly crafts canvas-covered cedar canoes in the tradition established by his grandfather in 1925.

That, he maintains, qualifies Miller Canoes as the oldest canoe builder in the country.

Not so fast, says Langford Canoes, based in Ontario's Muskoka cottage country. After 70 years, Langford calls itself the oldest canoe manufacturer of any significance in Canada, making up to 1,000 boats a year.

Both are right, in a sense. These two businesses represent two distinct streams of Canadian canoe making that are battling for the soul of the country's oldest industry – and for the pocketbooks of hard-pressed North American consumers. Making love in a canoe is hard – as any true, hot-blooded Canadian knows – but making money from canoes is even harder.

Langford's response to the tough economics of canoe making is building a brand, outsourcing production and deploying varied materials, from wood to plastic – as well as achieving some degree of scale. "Unless you are building a couple of hundred boats a year, you don't count," insists Steve MacAllister, president of the company.

Those are fighting words for Mr. Miller, 64, a small-scale artisan who might build a half dozen of his wooden masterpieces a year in Nictau, N.B. "I have no interest in building a plastic canoe," he says.

All canoe makers agree that the recession has eroded the incomes of middle-class consumers, leaving less money for luxuries such as $1,000 to $5,000 canoes. Baby Boomers are aging, and their children often prefer more nimble kayaks, or motorized watercraft, to the lumbering canoes of their parents. In addition, canoe making remains a highly seasonal business, which makes it hard to manage the ebb and flow of workers and inventories.

Once lucrative U.S. markets are jeopardized by the high Canadian dollar, and the continuing economic woes south of the border. Even the industry's mega-player, Old Town Canoes of Maine – which sells a lot of canoes in Canada among its output of 200,000 boats a year – slowed production in the recession.

Canoe making has been in a state of constant evolution since native people assembled the first birchbark models in the years before European settlement. The first canoe factories of any scale used cedar plank and rib construction. After the Second World War, plane maker Grumman Corp. directed its surplus war materials, and labour, to pioneering the production of clunky but carefree aluminum canoes.

As tastes changed, companies adjusted or died. Casualties of the past 50 years include iconic cedar builders such as Ontario's Peterborough Canoe Co. and New Brunswick's Chestnut Canoe Co., which still inspire rhapsodic tributes decades after they closed their doors.

The death of Chestnut in 1978 sent the Canadian industry tripping off in two different directions – toward modern production methods and lightweight synthetic materials, such as fibreglass and Kevlar, and to a cottage industry of lone artistes, eking out a living making one wooden canoe at a time.

Langford survives on savvy marketing and, in recent years, contracting work to canoe makers in the Shawinigan area of Quebec. Up to 20 per cent of its production in any year is still devoted to wooden canoes, but the chief craftsman is Alain Rhéaume of Grandes-Piles, Que., who also makes canoes for the American Trader label in the United States.

Mr. Rhéaume, a former cabinet maker, has the workshop capacity to turn out 300 to 400 wood canoes a year, but his numbers are down considerably in this depressed economy. "The U.S. is slow these days," he says.

He has adjusted by taking contracts to put wooden gunwales and other fixtures on boats otherwise made of composite materials. And he has became a supplier to the MacAllister family who bought Langford Canoes 25 years ago, having made their money in plastics injection moulding in Toronto – a background that rankles the wood canoe purists.

Entrepreneur Ken Langford launched the Langford operation in 1940, but it had been passed on to new owners and fallen on hard times by the 1980s. At that point, Keith MacAllister, Steve's father, bought land around Muskoka's Lake of Bays for development and discovered the property contained a canoe factory.

The MacAllisters didn't care much about canoeing, and thought about selling the business, but they discovered the Langford name had a cachet among hard-core paddlers. They concluded there was a bigger business that they could build around the brand.

Now based in Dwight, Ont., Langford Canoes sports an attractive website with a strong appeal to boating nostalgia. The company shows up at the major boat shows. It has turned out limited edition cedar canoes for Hudson Bay Co., complete with the Bay's trademark stripes of indigo, yellow, red and green, and has just finished a plaid canoe for Roots.

Even the G8 summit in the Muskoka area proved to be a marketing opportunity. Langford was contracted by Ottawa to provide a gift, in the form of a 58-inch solid cherry paddle, to each of the heads of state.

The old and the new

Steve MacAllister says Langford's canoes are based on its traditional designs, updated for modern safety and comfort. But after a period of running its own production in Quebec, the company shifted its work to independent contractors, such as Mr. Rhéaume, who understand the province's labour laws and practises.

Mr. MacAllister has little time for his small-scale detractors who say they have been around much longer than his own company. "There are probably 100 guys in Canada that have been building canoes in their garage for years, but they don't really count as companies," he insists.

"Every year, we get some farmer come in and say 'Well, we've been building canoes for 250 years.' We say, 'Great, and so have the Indians, but are you building thousands of them a year for 40 straight years?' The answer, of course is, 'No, we build one a year if we're lucky.' "

Roger MacGregor, a canoe historian who has written a book on the Chestnut Co., says it is a stretch to say Langford Canoes is the oldest canoe builder, given its changes in ownership and its current model of outsourcing canoe production.

But he agrees there is little left of the old companies from canoe making's golden age of wood. Chestnut died, he said, because its wooden models were swept aside in the move to newer materials. Even though it made its own fibreglass and aluminum boats, the brand loyalty wasn't there. Indeed, the Chestnut name has gained stature in retrospect, like artists who achieve renown after their death.

He finds it fascinating, though, to see the tradition carried on by clusters of entrepreneurial lone wolfs, in areas like Shawinigan, Northern Ontario, Muskoka, the Ottawa Valley and New Brunswick. Some of these torch carriers are former Chestnut employees and devotees, who make small numbers based on the old moulds and designs.

To Mr. Miller, Chestnut, with its annual production of hundreds of canoes, was a big player that he claims copied his grandfather's designs for one of its best-selling models.

At its peak, in the early 1970s, Miller Canoes made as many as 50 boats a year with three tradesmen. Now, Mr. Miller is labouring alone in his workshop, with works in progress of 24- and 26-foot canoes priced at $200 a foot.

He built his first canoe at 15 and "I've got 36 more years before I retire," he jokes. "I will gladly build my last canoe on my 100th birthday."

Contrast this with Bill Swift Jr. who has been making canoes and kayaks for 21 years and has a factory in South River, west of Algonquin Park, but doesn't claim to be an old-time craftsman. He turns out 1,200 canoes a year in synthetic materials, many based on a production process similar to that used in building the Space Shuttle and the new Boeing Dreamliner aircraft.

Mr. Swift, like Langford Canoes, was able to market his products on the back of the recent Huntsville and Toronto summits. The canoes displayed around the notorious fake lake, and thus featured in countless news clips, were Swift Canoes borrowed for the event.

But even Mr. Swift can't get the old craft out of his blood. He is building a replica of Chestnut's 16-foot Prospector model in carbon-Kevlar composite material and weighing only 14.5 kilograms. That, he says, is the future of the industry, which he believes is finally bouncing back after some choppy years.

He sees young families and baby boomers alike being pulled away from power boats by trends to fitness and environmental awareness, and attracted by the new lightweight, easy-to-maintain models. "The canoe market is moving back to where it used to be," he says, but based on modern materials.

That will never, of course, satisfy the wood canoe zealots, but it means this most ancient of Canadian industries isn't up the creek without a paddle yet.

Quote: "I've been doing this since I was a kid."

History: Considered the Stradivarius of wood builders, he started 24 years ago.

Output: Cut back to a couple a year; keeps busy repairing boats.

Quote: "My hands are on every stage of production. If you spend two or three months making something, it becomes a chunk of you, like for a painter."

Quote: The survival formula in canoe making is "being married to someone with a real job."

Quote: "As someone said, canoeing is a fringe activity and wood canoes are the fringest of the fringe."

History: Started fixing parents' boats 20 years ago. First based in Powell River, B.C., moved to Alberta for his wife's work.

Output: About one wooden canoe a month.

Quote: "No one gets rich making canoes." 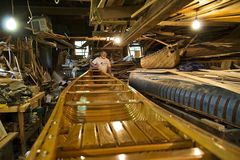 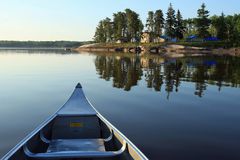