"I know what you are." An investor said this to San Francisco-based entrepreneur Anthony Venus nearly 20 years ago, during one of his early dot-com-era ventures, and it has stuck with him ever since.

"He obviously wasn't happy with me being gay," says Mr. Venus, now 45 and the co-founder and chief executive officer of YayPay Inc., a business-to-business fintech startup specializing in accounts receivable software.

His experience as an openly gay entrepreneur brought Gaingels to his attention when it was introduced to him by a venture capitalist he knew in Boston. Gaingels – the name is a mix of "gay angels" and "gaining from angels" – is an angel investing group made up of members who invest their own money into LGBTQ-led companies and provide business advice in exchange for an equity stake in the companies. Currently operating in the United States and Britain, the U.S.-based group's expansion into Canada will be officially announced at the Venture Out tech conference in Toronto on March 14-15. When Mr. Venus first heard about Gaingels, he liked the idea of having an investor who was supportive of diversity. He made an initial pitch in New York – interestingly, he says, to LGBTQ investors on the day after Donald Trump won the U.S. presidency – followed by a second one in early 2017, and secured seed round funding of $100,000 from Gaingels. Later, that summer, Gaingels put up another $100,000, in a Series A round that garnered $5.3-million.

The deal was structured like many of Gaingels', according to co-founder Paul Grossinger. Often, he says, the membership-based group will come on board as a lead investor during seed rounds and a participatory one during Series A or Series B. For the Gaingels group (Mr. Grossinger emphasizes it is not a fund) to invest, a company must score high on due diligence and there must be a commitment of $100,000 minimum from members. Investments typically range from $100,000 to $500,000.

Beyond the investing dollars, the network of members offers expertise, connections and mentorship to founders.

Mr. Venus calls the network "tremendously helpful." In 2018 alone, it has helped him solve technology problems, find prospective candidates for both board and executive positions and initiate talks with a major national bank for a desired partnership. Since Mr. Grossinger and co-founder David Beatty launched it in late 2014, Gaingels has invested more than $10-million directly and led $25-million in investments from other organizations. Thirty-two companies and eight venture capital funds have received investment. It has established chapters in New York, Los Angeles, San Francisco and London. Next up is Toronto.

Mr. Grossinger says Toronto made sense given its close geographic proximity to New York, and its large market of startups and highly engaged LGBTQ community were additional draws.

Albert Lam, 30, who is leading the Canadian expansion along with Adil Qawi, Benjamin Bergen and Chad Molleken, says a group like Gaingels is "very obviously missing" north of the border.

He cut his teeth at the community-level working as president of Start Proud, a national non-profit that supports LGBTQ students pursue successful careers in business. While there, he co-founded Venture Out, an annual conference for LGBTQ+ inclusion in tech and entrepreneurship. He observed how many students held themselves back because they often had preconceived perceptions that business was not a welcoming for them.

Gaingels helps break down these types of barriers, Mr. Lam says. There is "a higher level of trust and understanding of where that entrepreneur is coming from," he says. "It's also a comfort level in being able to be just completely who you are."

A 2016 study titled The State of LGBT Entrepreneurship in the United States, led by StartOut found a lack of trust existed within this demographic's key relationships – 37 per cent of founders were not "out" to investors and 12 per cent thought being "out" would hurt them.

Sarah Kaplan, professor and director of the Institute for Gender and the Economy at the Rotman School of Management, says that while there is a dearth of research available about LGBTQ entrepreneurs in Canada, what Gaingels is doing "makes complete sense."

"Anybody who's basically not a white, straight man in the economy, anyone who doesn't conform to that notion of what it means to be an entrepreneur, is likely to experience some form of discrimination," Prof. Kaplan says.

From his own experience, New York-based Mike Lefkowitz, who has founded a number of companies in more than 20 years as an entrepreneur, says LGBTQ founders continue to face discrimination and are less likely to receive funding. While he never hid the fact that he was gay, he generally kept quiet about it. "That's something that always bothered me," he says. Last year, after exiting five of his six companies, he decided that in his next chapter he didn't want to hide being gay. Gaingels provided a perfect opportunity for him to "pay it forward." He says the network offers entrepreneurs something he didn't have.

"It took me much longer to build my company and ultimately exit, then what it might take an entrepreneur today with the backing and power of Gaingels behind them," he says.

Although Gaingels is too young to have any exits and it does not publish its returns, Mr. Grossinger attests that its returns "stack up" and would fall in the middle of the top quartile of companies rated by corporate strategists CB Insights. Still, he stresses, it's a community organization, and it's not suited to people who just want to write a cheque and get money out. "You have to care; if you don't care I don't know why you'd bother." 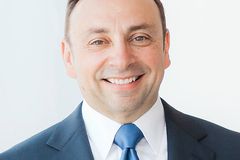