One of the world's biggest business software companies is making an enticing offer to tech startups in Canada: Try now, buy later.

Salesforce.com Inc. announced on Wednesday that its Salesforce for Startups program is arriving in Canada, a little less than a year after it was first announced.

"We deliver access to our key flagship products," says Ludovic Ulrich, director of startup relations for Salesforce. That includes the company's widely respected sales and customer management software, the cloud computing platform Heroku, database tools and more. Some are free for a year before you have to start paying, others are only free to develop software for, but are pay as you go or require revenue sharing. Joining is as easy as going to startups.salesforce.com and creating a profile.

To roll out the program, Salesforce also announced it will be partnering with Waterloo's Communitech startup hub to deliver both services and mentorship to select early stage companies.

"We started having conversations with them about this before the [Salesforce for Startups] program existed," says Iain Klugman, CEO of Communitech. "It was the same scenario with Google for Entrepreneurs. They said, 'Hey, there's a good model here, let's roll it out.' I guess we're really persistent … that we get companies to do weird things that hopefully turn out to be valuable for them on a bigger scale."

No other partnerships were announced, though Mr. Ulrich confirmed he's in talks with other Canadian tech incubators.

"Our goal in Canada [is] to inspire the next generation of entrepreneurs in Canada to have global ambition," he says. "We've been recruiting more than 2,300 startups all over the globe, in more than 80 countries."

Mr. Ulrich was reluctant to put a dollar figure on what a year's access to Salesforce software is worth. In part, that's because pricing on some products is determined by how much it is used, but also because he says he doesn't want "founders to end up in a scavenger hunt for free coupons or vouchers to start their business."

Michael Litt, CEO of Waterloo-based Vidyard (makers of video marketing software), is less shy about these pragmatic questions. His company is a Salesforce customer, as well as selling its services on the platform. At this stage, he spends about $20,000 a year to access the core customer relationship management software that is Salesforce's crown jewel. If startups took full advantage of all its offerings, Mr. Litt thinks the free trials could be worth as much as $50,000 a year.

"I realized right away that we needed this now, and it was definitely not something we could afford," says Les Magyar, co-founder and COO of MetricWire, another Waterloo startup that's a little more than a year old. As part of Communitech's recently launched Rev incubator he was invited to join Salesforce for Startups early (they are implementing in the next week) and got an early look at what he'd been missing.

Salesforce has many business tools, among them are what Mr. Magyar calls a "trifecta of sales awesomeness" – Salesforce CRM, the Pardot lead generation software and most importantly for him was Data.com. "It's like Google on steroids for sales research," he says.

"If I want to look for people that are in small pharma in a specific therapy area I can filter for those people and just call them," says Mr. Magyar. "It used to take me 40 hours a week of research. … I'd have to spend hours and hours a day researching on LinkedIn and Google."

Along with MetricWire, three more of Communitech's 10 Rev participants will be accessing the program.

Mr. Litt makes no bones that the free goodies are a huge incentive. His company participated in the famed Silicon Valley tech accelerator program Y Combinator, and he acknowledged that one of the things that made that experience worthwhile was donated resources from the likes of Amazon Web Services, access he figures was worth $200,000 to his fledgling company. And he doesn't buy the argument that Salesforce's interest in startups might be to create loyal customers by hooking them on software they can't do without.

"There's a business case to be made here, but I don't think that's the primary reason," Mr. Litt says. "[Salesforce for Startups] might for them produce one or two decent sized or growing customers a year, it's not going to move the needle insanely. … I think what they are doing is giving back." 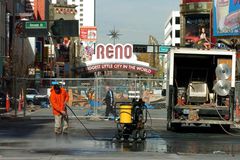 Toronto startup connects condo developers with emerging designers
February 9, 2015
Opinion
Canadians can innovate, but we’re not equipped to win
May 8, 2015