Michael Litt is cofounder and CEO of Vidyard, a video platform for business.

Donna rarely called me with good news. She was Vidyard's very first customer. Back in 2010, we launched a software platform to help businesses manage their online videos, but it was far from perfect. Its many flaws kept her dialling us for customer and technical support. She didn't realize we were a three-person skeleton outfit. At the time, our company's 1-800 numbers all got routed to my cell phone.

Startup gurus tell budding entrepreneurs to ship out a minimal viable product – one just functional enough to entice people to use it and provide feedback for improvements. That's good advice, provided you can find a customer who actually cares enough to tell you what's working and what isn't. In my case, I was fortunate enough to find that customer. Donna changed the trajectory of my business. As luck would have it, she also changed my life.

At that time, she was director of customer operations for a human-resources software company that hoped to use more video as part of its marketing. Donna was deadly serious about getting our product to work for her, and because it didn't, she sent us a steady stream of support tickets and phone calls.

I can't stress how transformative this input was. Without this kind of feedback, product development becomes like driving blindfolded: it's impossible to tell what works and what doesn't out in the real world. In fact, we relied on her word so heavily, we made a chart of her comments to put on our wall and constantly tweaked the platform to accommodate her suggestions.

But neither of us thought then that our relationship would ever be about anything more than business. I was with my company at the Y Combinator accelerator in California, while she was in the Kitchener-Waterloo region. When I got back to Canada in 2011, I hoped to reach out to meet her and pick her brain. But the million other priorities of starting a business got in the way.

At first, it was strictly business, as we met to go over what Vidyard could be doing better. As the connection deepened, she also advised me on how to recruit and incentivize our new sales team. I learned she had a background in outreach for non-profits: a role with surprising overlap with enterprise software sales. In both cases, you're asking people to open their wallets, when they might not initially be inclined to do so.

Donna also had a deep love of downtown Kitchener, a place with a rough reputation whose cheap rents made it popular among startups. She helped me see the beauty and diversity in a part of town I was always told to avoid as a kid. It's an area I came to love so much that I decided to build Vidyard's headquarters there.

Business grew as quickly as our relationship progressed. Vidyard had around 30 employees when Donna and I bought our first house in Kitchener in 2013. When we got married a year later, the company had more than 60 employees and we were actively seeking more funding to expand. In fact, a promising investor actually called me on our wedding day to tell me he was rejecting us for our Series B funding round. Thankfully, I had bigger things to think about that day (and the funding ended up coming through eventually, anyway).

Today, Vidyard is approaching 200 employees. We outgrew one office, then another and another. (We're now in our eighth home.) Though it all, Donna remains an amazing adviser for me personally and for our business. What's most valuable is that she sees the world through a completely different set of eyes than I do – a critical trait in a business partner or a life partner.

My startup has six co-founders. Here’s how it works
May 9, 2017
New partnership aims to create ‘a Bloomberg for private companies’
April 27, 2017
Oxford Properties and startup incubator team up to create a new Toronto innovation district
April 9, 2017 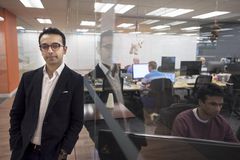