Not everyone is bold enough to reject a full-time gig at the almighty Google Inc. But Mathieu Blais-D'Amours did on his way to eventually quadrupling what the firm based in Mountain View, Calif., offered to pay him.

The freelance front-end and mobile interface developer makes his small fortune with rolled-up sleeves and jeans in a Quebec City shared worked space. He strings together a series of short-term contracts, each typically lasting four to six months, procured through New York tech talent shark 10x.

"Working remotely and not having to be tied to a single company for many years gives you a lot of freedom," Mr. Blais-D'Amours said.

Before becoming a 10x client three years ago, Mr. Blais-D'Amours, 28, rejected that Google offer and another from Ottawa's Shopify, both in the $100,000 range. Since then, he has again received offers for full-time work at "two big tech firms" (that he cannot disclose due to a contractual agreement with 10x), this time around $200,000, but the value of the contracts he fields now, when annualized, double even that.

His earnings are probably the envy of many of his peers, considering that the average mobile application developer in Canada makes a salary between $93,000 and $132,000, according to the Robert Half Technology Salary Guide. But Mr. Blais-D'Amours's case illustrates how fierce the competition has become in North America for the top tech whiz kids.

"It's 100 per cent a sellers' market," 10x founder Rishon Blumberg said. "The reason that we exist at all is because there's such a massive imbalance between the demand for talent and the supply for talent."

It's not tech companies in the echelons of Google, with valuations in the billions, that pay Mr. Blais-D'Amours, either. Currently, he works for a small cyber security firm out of Washington and most recently prior to that, a wearable device startup.

As young talents like him command more compensation, Canadian startups are trying to find ways to retain their share of the crop and stave off their Silicon Valley counterparts and Big Tech. These days, however, many claim they are able to stay in the mix.

Still, Google can wield its clout, and win. Steve Truong has spent five years at the company, after raising the stakes for his services upon graduation from the University of Waterloo.

"The tech competition goes on early," said Mr. Truong, 28, who completed co-op terms at a few startups before placements at Sony, Microsoft and eventually Google, where he accepted a full-time position in Montreal.

When Mr. Truong, a software designer on Google's Web browser Chrome who has since relocated to Toronto, revealed to Google that he was mulling over a competing offer from Mozilla, the company modified its offer to him with a higher equity stake and signing bonus.

Again, two years ago when Mr. Truong nearly left Google to pursue his career at a startup, managers persuaded him to stay by offering him work related to his fledgling interest in design.

"Google, even though it's a big company that does have some bureaucracy in how it's structured, is still willing to be flexible for its employees," said Mr. Truong, who is now completing a masters of design degree at OCAD University for which his employer is chipping in to pay a part of his tuition.

The gap gets bigger when accounting for the currency spread, and balloons in each country's most expensive labour markets. In San Francisco, for instance, second only to New York, the average peaks at $203,205 (U.S.) and in Toronto, it reaches $138,468 (Canadian).

Even though the Bay Area offer advantages for startups themselves – more influential clout, deeper pockets and the sheer mass of people to outfit any type of company – some founders find it prudent to keep a team intact on this side of the border, and are keen to see their own communities grow.

For AtVenu co-founder Derek Ball, hiring from the Bay Area is a non-starter, even though the Canadian entrepreneur is actually based near San Francisco. "Pretty much everyone in the area said, 'If you have the option to do it anywhere but here, why wouldn't you?'"

Instead, Mr. Ball opts to protect his brainpower in Calgary, where they are shielded from the intensity of Silicon Valley's labour market.

"One you acquire them, every headhunter in Silicon Valley starts ringing them up to lure them away to somewhere else," he said. "It's a difficult market to build and maintain a stable team."

The lower labour cost is one factor to hire here, but on the contrary large funding announcements are becoming more common, giving Canadian startups more wiggle room to splurge on staff.

Indeed, Sam Haffar, an American who spent eight years in The Valley before recently relocating to Montreal, believes that the number of credible startups in Canada is hitting a "critical threshold."

"Before, the top engineers would flee the moment they had the chance. What's happening now is that you have some serious venture-backed companies that are really hitting an awesome trajectory," said Mr. Haffar, a partner at Real Ventures.

Although there are few hubs in Canada that have truly reached critical mass, Sam Pillar sees the upside of Edmonton's understated reputation.

"We've spent a lot of time and effort into building our culture," says Mr. Pillar, chief executive officer and founder of Jobber. "Relative to a place like San Francisco, we've got fewer software developers and engineers to choose from, but there's also a lot less competition in town."

But now that Jobber has grown to 30 employees, and could possibly double by the end of the year, Mr. Pillar's hiring needs are more precise. Talent does not recycle quickly back into the pool, he admits, a drawback of being in a small market for company like Jobber that is scaling rapidly.

When the time comes, Mr. Pillar, whose company has only lost three employees in its five-year history, knows that he will need to look elsewhere for the right people.

One destination could be Waterloo, where despite city's reputation as Canada's premiere startup hub, tech salaries still, for the moment, fall below the national average. 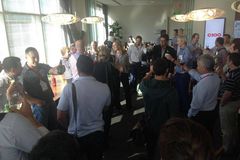 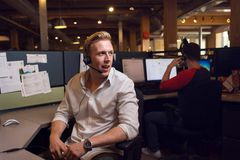