As a mother and a small business owner, Michelle Epstein is torn by Ottawa's plan to expand parental leave to 18 months.

"The extended leave is a great thing for new moms, but it just puts the burden back on the business to manage for that much longer – and then deal with it when [the employee] comes back," says Ms. Epstein, a mother of two and co-owner of Toronto-based Elle Fitness and Social, a women's gym with two full-time female employees.

The biggest issue, she says, is training new staff when an employee goes on maternity leave, and then having to let that replacement go when the new mom returns to work.

"It's hard because I have to hold on to the spot for the person who's leaving … and because of the nature of my very small business, I can't handle the second person when the one on mat leave wants to come back," Ms. Epstein says.

There's also a chance the mom will come back earlier than expected, or may not come back at all, which creates some uncertainty.​ Also, a lot can change in a business in 18 months​,​ so owners will likely have to retrain staff when they return.​

The Liberal government said in its recent budget that it will give employees the option to extend parental leave to 18 months​ from one year. The government has yet to pick a start date for the change. Parents won't get more money from employment insurance benefits​ when the change kicks in​, but can get reduced payments over an 18-month period instead of a year.

​There was talk about allowing parents to come on and off parental leave, but a government spokesperson confirmed​ to The Globe​ this week that the leave will need to be taken all at once, similar to the current​ rules with the 12-month​ leave. That said, the leave period can be shared by two parents. ​

To better cope with the pending changes, Ms. Epstein plans to have more open and ongoing conversations with her staff once they reveal they're pregnant about their plans for ​leaving and returning to work.​ "The way I see it, whatever they decide is fine, but as a business owner I need to know so that I can continue to run my business," she says.

"A lot of employers don't take advantage of that time in advance," Ms. Dooley says. That's a risk, especially if the mother has to go on leave sooner if there's an issue with the pregnancy."

Ms. Dooley also says business owners should work with their expecting employees, using their on-the-job experience to figure out how to best fill the role while away. Managers and staff should also be careful not to alienate mothers or to exclude them from work in the months leading up their leave, or make assumptions about how long they plan to be away.

"Mat leave is not a problem," Ms. Dooley says. "All it takes is planning with the employer and employee to manage this time while the employee is away ... I have yet to see a company fall apart when someone goes on mat leave."

Dan Kelly, president of the Canadian Federation of Independent Business, doesn't think the extended parental leave will become a major issue given that many parents can't afford to take 18 months off work after having a baby.

"For a small business owner, don't panic that there will be a massive take-up of this," Mr. Kelly says. "But you still have to be prepared."

Elizabeth Reid, an employment and human rights lawyer at Vancouver-based Boughton Law, says a common misconception small business owners have is that they have to continue to pay an employee while on parental leave.

"That concerns me when that misinformation i​s ​out there because it may affect whether people are prepared to hire women if they have the wrong idea about what their obligations are going to be in light of a maternity leave," she says.

​Ms. ​Reid says that for most employers in British Columbia and other provinces, the only monetary obligation during a pregnancy or parental leave is to pay for benefits such as extended health and dental care. Businesses who pay for 100 per cent of the benefit cost have to continue the benefits during a parental leave. Those who share the benefit cost with their employees only have to provide benefits if the employee continues paying his or her share.

She also recommends business owners be aware of human rights legislation that protects pregnant women from discrimination on the job. For example, employers shouldn't assume that a pregnant woman wants reduced hours or workload during her pregnancy.

Also, under employment standards law, business owners can't terminate employment or change an employee's working conditions because of a pregnancy without the worker's consent. While there are a few exceptions, generally the employee must also be put back in the same job or a comparable job when they return to work.

For business owners who haven't had someone on maternity leave before, Ms. Reid recommends they pause when hearing the news before talking about arrangements.

"Start with, 'Congratulations, how exciting. We'll work out the details,'" she says. "Sometimes people are surprised and they immediately go to the problem-solving. That can be perceived badly." 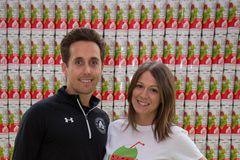