According to the World Health Organization, more than 3.5 million people die each year from water-related diseases worldwide. But clean water is a problem Canadian technologies can help solve. This country has a significant number of companies providing technology for cleaning water, either before it is used for drinking or before it returns to the environment after use in households or industry.

"There is a solid capacity for managing water and water technology in Canada," says Rick Findlay, vice-chair of the Canadian Water Network, a water research group that is part of the Network of Centres of Excellence program. "We do play on the world stage - and we could play a bigger role, of course."

Canada's strengths in this area didn't grow because we faced greater challenges - countries such as Israel and Australia are shorter of water than we are. In fact, the opposite may be partly true.

Industry grew up around the Great Lakes precisely because of the availability of water, observes David Henderson, managing director of XPV Capital Corp., which invests in water companies. When legislation started forcing those companies to clean up their wastewater, a significant market for water purification resulted, creating what Mr. Henderson calls the Great Lakes cluster: the largest concentration of water-related companies in the world, in an area that includes southern Ontario, as well as U.S. states bordering the lakes.

Canada has many water purification companies, both around the Great Lakes and elsewhere. Here are four examples.

Membranes also play a growing role in pre-treating drinking water because of the realization that chlorine - once seen as the cure-all - reacts with certain organic matter to produce carcinogens. Membranes can help remove the organic matter before chlorination, Mr. Dugré says.

H2O Innovation doesn't make the membranes themselves, but designs and builds membrane filtration systems. The 10-year-old company earns more than half its roughly $28 million in annual revenue in the U.S., and 25 to 30 per cent in Canada, with the rest overseas. Last year, H2O set up H2O Innovation India, a joint venture with a local partner that now has 26 employees and revenues of around $4.2 million.

If it cleans water, Kontek Ecology Systems Inc. probably builds it. The Burlington, Ont. company has built many different water treatment systems, from conventional precipitation technology to membrane filtration to microbiological treatment. And those systems are in use from Canada to Abu Dhabi. Glen Russell, president of Kontek, says the 30-employee firm's customers include the Royal Canadian Mint - one of its first clients - as well as Fortune 500 companies such as Qantas, Black & Decker, United Technologies and Magna International.

Kontek focuses on corporate customers that want to purify water used in their manufacturing processes before releasing it back into nature. With an active research and development program, Kontek has developed techniques for removing such contaminants as mercury, gold and chrome - and recovering the more valuable elements - from water.

Mr. Russell says Kontek suffered during the recession, but is now hiring, and expanding its 25,000-square-foot headquarters in Burlington. Kontek also has a 40,000-square-foot manufacturing plant in Niagara Falls, Ont. This year's sales are up about 400 per cent over 2010, and Mr. Russell anticipates revenues between $12 and $15 million.

"Eighty per cent of pollution in our lakes and streams is due to storm water," says Dr. Reagan Davidson, Imbrium regional manager. Imbrium licenses three products - called the Stormceptor, Jellyfish and SorbtiveFilter - to concrete-forming companies that incorporate them in drainage systems.

Joe Monteith - whose son, Scott, is now Imbrium's chief executive - devised the original Stormceptor when he worked for the Region of Peel and wanted a way to remove oil and chemicals from water running off industrial properties. Its design creates a whirlpool that sucks impurities down into a lower chamber - they can't get back up, but clean water can.

The Jellyfish uses filtration "tentacles" to trap fine sediment. The SorbtiveFilter, Imbrium's newest product, also removes a variety of sediments and impurities and is particularly good at catching phosphorus, which is a growing concern because it can cause excessive algae and weed growth in lakes.

Ostara Nutrient Recovery Technologies Inc. recovers phosphorus and ammonia from sewage by exposing the water to magnesium, which reacts with the phosphorus and ammonia to create crystals of magnesium ammonium phosphate. Those crystals, as it happens, make good fertilizer, which the six-year-old Vancouver company sells under the brand name Crystal Green.

Spun off from research in the civil engineering department of the University of British Columbia, Ostara built its first demonstration system in Edmonton and has since installed commercial systems in Portland, Ore., Suffolk, Va., and York, Penn. Others are in the design stages, including one for Thames Water just outside London, England, says Philip Abrary, Ostara's chief executive.

Ostara will either build a treatment facility at its own expense and charge a municipality to operate it, or build it at the expense of the municipality which then owns and runs it. Either way, the municipality gets a share of the proceeds from fertilizer sales.

While most of Ostara's initial business has been in the U.S., the company recently hired a managing director for Europe and hopes to expand there, Mr. Abrary says. Ostara has about 35 employees today; Mr. Abrary would not disclose its revenues.

Toronto startup drags NY libraries into the future
June 7, 2011
Five reasons to buy a PlayBook - and two reasons not to
June 3, 2011 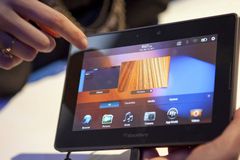