Experts and company officials see the reconciliation between the United States and Cuba as a mixed blessing for Canadians who have been doing business with the island nation all along.

"It's good news and it's bad news," says John Kirk, chair of the department of Spanish and Latin American studies at Dalhousie University in Halifax.

On the positive side, companies such as resource company Sherritt International Corp., Cuba's biggest foreign investor, stand to gain, says Dr. Kirk. The bad news is that "it will take about two years to work its way through" all the details of the reconciliation, and Republicans in the U.S. Congress will resist the moves announced by U.S. President Barack Obama every step of the way.

But other, smaller Canadian companies that have been doing business with Cuba during the past few years have little to gain from increased competition from U.S. firms, Dr. Kirk says. They might find it tougher now that the United States is no longer frozen out.

For Sherritt, it's been good news so far, with the company's shares soaring nearly 40 per cent on the TSX during the week of the reconciliation announcements, though they have dropped a bit since.

"The U.S. embargo always cast a bit of a cloud over what we're doing there. We always felt that if and when the embargo were to be lifted it would mean opportunities for Sherritt, because of the potential to sell our product into the U.S.," says Sean McCaughan, the company's vice-president of investor relations and communication.

Sherritt, headquartered in Toronto, has extensive nickel mining, oil and gas exploration and production and electric power production in Cuba. The Cuban nickel it mines under a joint venture agreement with Havana is refined in Fort Saskatchewan, Alta., but because of the U.S. embargo, none of the refined nickel is allowed south of the border.

Sherritt's executives have also been targeted by the Helms-Burton Act of 1996, which bars senior officials of companies that do business with Cuba from entering the United States. This type of restriction, brought in by legislation, can only be lifted by the U.S. Congress.

President Obama announced that he intends to bypass Congress to lift some of the restrictions on trade and travel between Cuba and America. The United States slapped a comprehensive embargo on Cuba in 1960.

Some of the embargo's restrictions were issued by executive order and can be repealed instantly by President Obama, but others, such as the Trading with the Enemy Act, must be dealt with by the Republican-led Congress, which has already signalled that it will oppose.

Unlike the United States, Canada has maintained relations and trade with Cuba throughout the one-party regimes of Fidel Castro and his brother Raul, who succeeded Fidel as president in 2006.

Cy Tokmakjian, the firm's founder and president, was imprisoned by the Cuban regime about three years ago and sentenced in early October to a 15-year jail term for corruption, which the company and the executive's family say was a completely false charge.

Raffi Tokmakjian, the founder's son and now president, says he is being guarded in his comments as Cuba's new relationship with Washington develops. His company issued a statement saying that, "The family of Cy Tokmakjian is very hopeful Cuba will also release Cy on humanitarian basis during this Christmas and holiday period. … It's time for him to come home to Canada."

Ian Wilson, whose Customs House Cigars in Niagara-on-the-Lake, Ont., sells Cuban cigars to many U.S. customers (who aren't allowed to bring them across the border), says he was nervous at first about the lifting of U.S. restrictions. Now he's not so worried.

Cigar smokers still crave Cuban product, he says, "but the quality from other places has really come up."

Canada's trade with Cuba is only about $1-billion a year, less than we trade with the United States each day. There are many opportunities that have not been well exploited, says Dr. Kirk, partly because Prime Minister Stephen Harper has given the country's communist regime a cold shoulder.

There are opportunities in Cuba for Canadian companies in biotechnology, tourism and in selling wheat to Cubans, the professor adds, but the Americans may swoop in quickly.

Those classic Cuban cars from the 1950s will be gone soon, too, he adds.

"Savvy American buyers, including movie studios, will be buying them up as quickly as they can once the Trading with the Enemy Act is lifted," he predicts. "I'm sure many car dealers are down there sniffing around already."

Opinion
The Cuba deal is good for Obama – and for Harper
December 23, 2014 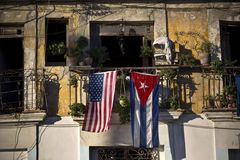