Montreal's biggest public transportation project in 50 years is officially in the starting blocks. Canada's SNC-Lavalin Group Inc. and five partners will build it. France's Alstom SA and SNC-Lavalin will equip it. Now, its promoter, Caisse de dépôt et placement du Québec, has to prove it can run down the track.

At a news conference on Thursday, the pension-fund manager said construction of its electric-powered light-rail system, known as the Réseau Express Métropolitain (REM), will start in April, with the first passengers planned for the summer of 2021. When completed, the 67-kilometre network will be the fourth largest automated light-rail transit line in the world after Singapore, Dubai and Vancouver.

In making its selection of suppliers for Montreal, the Caisse chose the company responsible for bringing the last phase of that Vancouver line into service on schedule and on budget a decade ago: SNC-Lavalin. The Montreal-based engineering firm clinched not only the contract to build the REM infrastructure but also work to supply the trains. That selection came at the expense of Bombardier Inc., which was also in the running.

Details of the construction plans and confirmation of the project's $6.3-billion budget, which is within 5 per cent of preliminary estimates, means the REM will now officially move forward with a roughly six-month delay from its initial expected completion time. There had been considerable doubts that the project could get off the ground – doubts that grew late last year when the Caisse said it needed more time to negotiate with bidders after it didn't like their initial offers.

"The REM is now a reality," Caisse chief executive officer Michael Sabia said. The pension fund is leading the ambitious project as financier and manager. The Quebec and Canadian governments are minority investors with commitments of $1.28-billion each.

Executing the project to completion within the current parameters will be a trial for the Caisse as it seeks to prove it can build new infrastructure instead of just investing in existing assets. Mr. Sabia said the Caisse expects to earn a return of about 9 per cent from the REM, adding that what matters to the pension fund is the cash flow it expects to generate from the investment over the next two decades.

"This is a big challenge for the Caisse, a big test," said Michel Nadeau, a former executive with the pension fund. "It has to deliver the goods" if it wants to strike similar deals in the future.

The Caisse picked a group led by SNC-Lavalin and Pomerleau Inc. to oversee all engineering, procurement and construction, including the building of all necessary bridges, tunnels and stations. The contract is the largest of two awarded, representing about 80 per cent of the project's total price-tag, or roughly $5-billion.

It wasn't immediately clear what SNC's share of the contract award will be. Desjardins Securities estimated a potential boost of $1.6-billion to SNC revenues and 36 cents a share to its bottom line, assuming a 25-per-cent stake in the project and a margin on earnings before interest and taxes of 5 per cent.

"We always expect the company to replenish its backlog but today's announcement is material in nature," National Bank analyst Maxim Sytchev said in a research note. With the shares trading down since the start of the year, this is "the first step in re-establishing momentum" for the stock, he said.

The Caisse also picked French train maker Alstom and its partner in this bid, SNC-Lavalin, to supply about 200 train cars and related equipment. That contract is smaller but still tops $1-billion. The trains will be driverless.

Together, the two contracts represent a $3.7-billion contribution to Quebec's economic output, with 34,000 construction jobs and 1,000 permanent jobs, the Caisse said. About 65 per cent of the material supplied will be made locally, it said.

The decision not to choose Bombardier marks another blow for the company's North American rail business, which is struggling to deliver product to customers amid supply chain difficulties. Bombardier has faced repeated criticism from Toronto's regional transit agency Metrolinx and the Toronto Transit Commission alleging it can't produce on time. Last summer, it was also dropped from the bidding to supply a new fleet of subway cars for New York's Metropolitan Transit Authority.

The Caisse holds a 30-per-cent stake in Bombardier's rail unit and is one of SNC's biggest shareholders. The pension fund says the REM tender process was rigorous and monitored by external auditors to ensure its integrity. Still, that Chinese wall might not be understood by all.

"It's going to be hard for Bombardier to explain around the world why one of the owners of their business did not buy from the company they own," said Karl Moore, a corporate strategy specialist at McGill University. "If I were a salesperson for their competitors, I would absolutely bring this up." 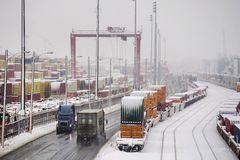