Sobeys Inc. let down its customers in its product offerings and marketing, but the grocer is racing to improve its operations, cut costs and win back shoppers, especially those in Western Canada who abandoned Safeway stores, its new leader says.

Michael Medline, who took over as chief executive officer of parent Empire Co. Ltd. and Sobeys two months ago, said the company has a "byzantine" structure that needs to be simplified while its marketing message needs to be sharper and more compelling to woo back consumers – particularly to its Safeway supermarkets.

"We will take aggressive and bold actions to address the issues in our business, and we are prepared to make the tough decisions and [take] decisive actions necessary to see Empire return to sustainably profitable growth," Mr. Medline told an analyst call after the company released its third-quarter results, which continued to show sliding sales.

Sobeys has been struggling since its acquired Safeway Canada in late 2013, in part due to what Mr. Medline acknowledged wasn't a smooth integration, touching off a series of problems that often resulted in bare shelves and angry customers.

Sobeys' internal issues, including a switch in private labels and new sourcing for its fruits and vegetables, were exacerbated by a downturn in the economy in Western Canada as well as a growing trend towards discounting, which made Sobeys higher prices stand out.

Sobeys is alone among major grocery players in Western Canada not to have a separate discount chain there, although it has one in Ontario called FreshCo.

Mr. Medline said he is studying whether to expand FreshCo to western provinces but hinted that may not happen soon because of the expense and work needed for the launch amid other more pressing priorities.

Over the past year or so, Sobeys has dropped its prices, but Mr. Medline said the retailer has to give customers more reasons to shop at its supermarkets.

"I'm not going to mince my words," the former CEO of Canadian Tire Corp. said. "I am disappointed in how we have approached our customers. Our ability to understand our customers and effectively communicate with them has been sorely missing."

He said better decisions need to be made on what differentiates the Sobeys customer from the Safeway customer.

"In my long experience with different banners, when you take away what's dear to customers, there's a grave effect," he said. Many customers were upset that Safeway replaced its own store brands with Sobeys's line of Compliments items.

But his research shows that Sobeys and Safeway still have lots of opportunities, and their current management must seize on them.

"There's a latent loyalty to Safeway in the West that we have to be able to recapture," he said, adding later: "We haven't communicated with our customers, and we're not quite sure how to do that at this point."

He said profit margins are beginning to stabilize after Sobeys spent months lowering prices. Empire's third-quarter gross profit margin rose slightly to 23.7 per cent from 23.6 per cent a year earlier.

"We must and will fix the West," he said. Still, Mr. Medline refrained from giving an exact timeline of when he expects the business to recover.

Its revenue dipped to $5.89-billion from $6.03-billion. Sales at existing stores, which excludes the effects of annual openings and closings and is a key retail measure, dropped 3.7 per cent (excluding the effect of fuel sales,) compared with a decline of 2.6 per cent the previous year.

Michael Van Aelst, retail analyst at TD Securities, said that so-called same-store sales performance is still poor, although operational cutbacks have kicked in early. "It is clear that Empire continues to lose [market] share," he said.

In the comparable quarter, rival grocer Metro Inc. posted a 0.7 per cent gain in same-store sales, while Loblaw Cos. Ltd. reported a 0.1 per cent increase.

Mr. Medline said he wasn't surprised with the downgrade, although his goal is "to one day get back to investment grade. "But it's pretty immaterial on our cost of borrowing on existing debt. And we have significant liquidity." Sobeys is scaling back on capital spending for business reasons, he said. 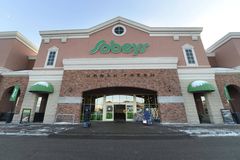