Canada's business leaders are joining a new social-media campaign aimed at promoting more women in senior roles, publicly pledging to champion a woman in her career and challenging other executives to participate.

The #GoSponsorHer campaign asks top executives to name a woman they will help support publicly, post the pledge on a social media site such as Twitter or Facebook and then publicly "tag" two or three other senior leaders they know, challenging them to become sponsors to women of their choice.

Most sponsors choose women within their own company or industry, where they have the ability to make a meaningful impact in their careers, she said.

The campaign aims to highlight the critical differences between mentoring and sponsorship, she said. Leaders are urged to go beyond mentoring, in which they offer advice and support to women about their careers, and instead embrace sponsorship, which requires a more active effort to encourage advancement. There are no specific things sponsors must do, but they typically help women by making introductions, inviting them to work on key assignments and championing them for promotion.

"A sponsor will really stick their neck out and create opportunities – this is somebody who is personally committed to advancing your career,"Ms. McGee said.

Mark Wiseman, senior managing director at global investment firm BlackRock Inc., Ms. McGee's sponsor in the program, said many top executives have benefited from sponsorship earlier in their careers, but those relationships have been socially easier for senior men to navigate with other men.

"The reality, especially in the investment industry, is that men have tended to have better sponsorship in their careers than women because it's generally comfortable for men to sponsor other men, rather than for men to sponsor women," he said.

Frank Vettese, chief executive officer of Deloitte Canada and a sponsor in the program, said women need sponsors not just talking to them about their careers but "leaning in on an unprecedented scale, putting their personal leadership on the line."

"Research shows that women are over-mentored and under-sponsored," he said in a statement.

Mr. Wiseman said the social-media aspect of the program is a simple way to spread the word about sponsorship to more senior people in business. He is participating, he said, because the investment industry has too few women in top roles and needs to draw the best talent from the widest pool of candidates.

"Quite simply, the industry has done a terrible job of that to date, and if we can crack that code, we'll be better investors and put up better results," he said.

Ms. McGee said research shows women are 46 per cent less likely than men to have an identified sponsor. They hold 33 per cent of senior management jobs, and fewer than 1 per cent of CEO positions.

The statistics suggest many senior men in leadership roles have an "unconscious bias" about who they really champion for advancement, she said.

"It's really bad, and has been despite a number of policy and corporate changes over the past 20 or 30 years – the pipeline is not getting better," Ms. McGee said. "Something is not working."

She said a sponsorship relationship should also include a reciprocal commitment from the women involved, who should be willing to support their sponsors' goals.

"As a sponsoree, you might prioritize that sponsor's projects, you deliver for them, you help them build a cadre of supporters. You use your talents to help them, just as you would a good friend."

Why some female founders are rejecting women-only startup initiatives
January 30, 2017 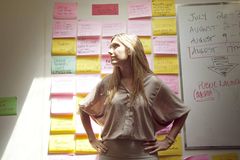 For Canada to succeed on the global stage, we need more women tech leaders
January 17, 2017
Women leaders need to celebrate their achievements, loud and proud
January 18, 2017
Follow Janet McFarland on Twitter @JMcFarlandGlobe
Report an error Editorial code of conduct
Due to technical reasons, we have temporarily removed commenting from our articles. We hope to have this fixed soon. Thank you for your patience. If you are looking to give feedback on our new site, please send it along to feedback@globeandmail.com. If you want to write a letter to the editor, please forward to letters@globeandmail.com.
Comments