German Chancellor Angela Merkel has ruled out letting Greece default on its debt, in the latest sign Berlin is softening its stance toward Athens ahead of an eagerly awaited report on its reform progress from the "troika" of international lenders.

The German leader signalled that she would be taking a more conciliatory approach toward Greece by visiting the country last week for the first time since the euro zone crisis erupted there three years ago.

And over the weekend, comments by several conservative allies of the Chancellor provided further evidence that the government has embarked on a delicate policy pirouette.

Finance Minister Wolfgang Schaeuble, one of Greece's harshest critics, told a meeting of business leaders in Singapore on Sunday that the country would not go bankrupt – an acknowledgement that Athens will get the €31.5-billion ($41-billion U.S.) aid tranche it needs next month to avert a default.

Ms. Merkel told a news conference with Panama's president on Monday that she was in total agreement with Mr. Schaeuble, and explicitly ruled out any steps – including a Greek insolvency or euro zone exit – that might unleash "uncontrollable developments" in the single currency bloc.

The change in tone, which helped push down Greek bond yields to their lowest levels in over a year, reflects a reassessment by Ms. Merkel of the costs and benefits of her tough public stance toward the euro zone's most vulnerable member.

The hard line served two main purposes: it ensured that reform pressure on Greek Prime Minister Antonis Samaras remained high, and it convinced sceptical conservative allies of Ms. Merkel in the German parliament to support her.

Now the calculation has changed. With a U.S. election less than a month away and a German vote due one year from now, reducing the risk of turmoil has become the top priority, even if it complicates Ms. Merkel's domestic dance.

She now looks set to grant Mr. Samaras the two extra years he is seeking to hit deficit reduction targets. This will be a tough sell at home, in part because it would tear a new hole in Greece's funding plan.

But it is seen as workable as long as Ms. Merkel can avoid going to parliament to seek approval for additional loans, on top of those set out in the country's second bailout package.

"There is a recognition, not just in Germany, that we need to avoid going back to national parliaments for Greece," a senior German official told Reuters, requesting anonymity.

Ideas under consideration range from front-loading the loans in the second bailout, to using left-over EU budget funds to plug a Greek hole that sources say could total as much as €30-billion.

Governments and the European Central Bank have ruled out accepting losses on their existing loans to Greece – a solution favoured by the International Monetary Fund (IMF) to fill the Greek gap.

Ms. Merkel also seems to have cooled on the idea, floated by some German officials, of bundling aid for Greece, Spain and Cyprus together in one final package toward the end of this year.

"It's an illusion to think we can align these three countries in one package," a second senior German official said. "Things just don't work that way in Europe."

Working in Ms. Merkel's favour is the support of the main opposition party, the Social Democrats (SPD), for a softer stance on Greece.

Her SPD challenger in the 2013 election, Peer Steinbrueck, has come out in favour of giving Greece more time to make savings, reducing the domestic risks for Ms. Merkel of that course.

There are also signs that doubters in her own coalition are prepared to go along if a divisive debate in the Bundestag (parliament) can be avoided. Rainer Bruederle, leader of the Free Democrats (FDP) in parliament, said on Monday that there was a readiness within the government to give Greece another chance.

Until he struck a softer tone in Singapore, Mr. Schaeuble was seen by many outside of Berlin as the biggest obstacle to agreement on a range of euro zone issues – from aid for Greece and Spain, to European banking supervision and direct recapitalization of banks via the ESM rescue fund.

"There have been several instances when he was clearly speaking for himself and not for the German government," one senior EU official said. "He seems to be trying to limit Merkel's room for manoeuvre."

Two senior German officials agreed with that assessment, saying Mr. Schaeuble was worried about Ms. Merkel making too many compromises, and therefore felt the need to come out strongly in public to defend what he saw as German interests.

"If Merkel wants to give Greece additional money without new steps in return, then she will have to give Schaeuble a clear order to do it," one official close to the minister told Reuters earlier this month.

Whether that order has indeed come down is unclear, but Mr. Schaeuble now seems to have got the message. 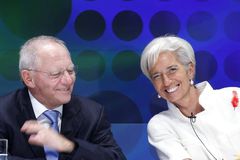