With its long history as a petroleum producer, Mexico might not be the first place people think of when it comes to cleantech and renewables.

Yet over the past few years the country has become a magnet for companies in the sustainable energy sector, companies as interested in its solar, wind and geothermal resources as its oil and gas. And with recent changes to laws governing power generation, experts say, that interest will only increase.

"There has definitely been exponential growth in the sector," said Luis Aguirre Torres, chief executive officer of the Mexico City-based consultancy GreenMomentum Inc. The biggest has been in solar energy, he added, which has experienced triple-digit growth rates, but the development of wind, biomass and geothermal projects are also on the increase.

Behind that growth spurt is the constitutional amendment voted on by the Mexican congress in December of 2013. While the opening it gave to private companies in the oil and gas sector has garnered the lion's share of attention, subsequent laws have also focused on electricity generation.

"New rules of the game are being set up here in Mexico that are mainly focused on benefiting ... the generation of renewable energy," said Hector Olea, CEO of Gauss Energia.

"That is substantially changing the way business is conducted."

For Daniel Chavez, however, who advises investors on energy projects in Latin America for Houston, Texas-based law firm McDermott Will and Emery LLC, even before the reforms, "it was already a market that was growing and showing great momentum."

The reason for that was simple, he said. "The reality is the market itself is attractive because the costs of renewable projects have gone down significantly, and at the same time, energy costs in Mexico are still pretty high."

Indeed, manufacturers and other large firms have already been looking for ways to cut down on their energy costs, which are almost 85 per cent higher than those in the rest of North America, by turning to solar and other energy alternatives. Spanish energy developers, such as Bilbao-based Iberdrola, have had a presence in wind-generated power for some time already, said Mr. Chavez.

With the new legal framework, said Mr. Olea, "all of the big players, worldwide, are focusing their participation in Mexico, and we are seeing some very enthusiastic investors right now."

Under the new regime, the state owned Federal Electricity Commission will continue to buy power from private companies, said Mr. Chavez, "through a number of mechanisms. The most important one is through the wholesale electricity market. It will now launch power auctions, and there will also be a special category for renewable projects." Private companies will no long need to "justify self-supply" as they apply for permits, he said.

As a result, he is seeing increasing interest on the part of his firm's clients, whether companies or private equity funds, in investing in the sector. "And a lot of them are interested in renewables," he added.

"Some of it has to do with the fact that they have traditionally invested in renewable projects in developed markets," he said, where opportunities are drying up. "And these are markets that depend on tax incentives for them to continue growing. So here is a market that is a very sizable market, and where renewable projects are not dependent on this type of incentives. So it certainly makes for a good business plan."

Yet as various market analysts have pointed out, Mexico still has a very long way to go to realize its full potential. The country is currently ranked 36 out of 40 on the Global Innovation Index for Clean Technology. "It is early in the game for investors to position themselves," said Mr. Olea.

Despite the fact that it is favoured by some of the highest solar radiation levels in the world, for example, "the currently installed capacity is minimal," he pointed out. "But in the upcoming years, photo voltaic energy will be the main driver for renewables in the long term."

"While biomass projects and geothermal are in the pipeline," said Mr. Chavez, "if you see the number of permits the Energy Regulatory Commission has been issuing, in terms of renewables it's heavily concentrated solar projects, and then wind."

Mr. Aguirre is also bullish on solar. "Given the insolation belt [exposure to sun] and therefore the efficiency of production, as well as the new laws, it will make solar the largest growth sector by far in Mexico," he said.

"Five or ten years ago, clean technology did not exist in Mexico," he pointed out. "It was something people were only beginning to conceive of. But I believe that the effort we and other groups have made has managed to put clean technology in front of the political agenda so that it be considered a priority sector."

One sign of that is another ambitious goal set by the government: achieving 35 per cent, up from the current 7 per cent, of Mexico's energy needs from clean power by 2024.

For Mr. Olea, a final driver of Mexico's clean power sector is the increase in electricity usage. "Energy needs are growing at 5 per cent annually," he said. "And that is a very strong requirement of new power demand. All of this in a very large country where energy is needed in the short term." 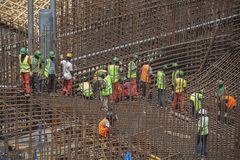