Two Canadian tech companies have gone public recently with promises of a rosy future. One has been a hit with investors out of the gate, the other has face-planted. Now, with their first quarterly earnings reports on the way, investors will have a chance to revisit their initial responses.

The former is Ottawa e-commerce software platform company Shopify Inc. The stock shot up on its debut on May 21 and now trades at double its $17-a-share offer price. Shopify reports on its second quarter Thursday.

The latter is Mogo Finance Technology Inc., an online lender that is seeking to disrupt the big banks. The Vancouver company's stock went out on June 25 at $10 a share and immediately lost altitude. It has since tumbled by 30 per cent. Mogo's second-quarter report comes out on Aug. 13. Analysts expect big numbers from Shopify, with an average revenue estimate of $38.1-million (U.S.) for the second quarter, up more than 60 per cent year over year.

The company is expected to lose $4.8-million. RBC analyst Ross MacMillan forecasts that Shopify will add 51,000 merchants this year.

There are two concerns for Shopify: The stock is pricey – trading at about 13 times the ratio of enterprise value-to-revenue, leaving some analysts sitting on their hands. "We continue to believe [Shopify] is a very promising stock that is just a stock-market correction away from a possible upgrade from hold to buy," Canaccord Genuity analyst Richard Davis said in a recent note.

The other concern is that Shopify operates in a highly competitive market, with much potential churn among the modest-sized merchants that use its platform. One reminder came this week as Amazon.com Inc. unveiled its Launchpad platform that will feature new products for sale. That suggests that "Amazon is preparing to one-up" Shopify and other e-commerce startups, TechCrunch reported.

So far, there isn't much concern that Amazon will siphon business from Shopify. "Launchpad is an interesting move by Amazon to add unique and innovative products to their selection. I think companies using this program will do well," Vancouver venture capitalist Boris Wertz said. "Having said that, you don't want to be too dependent on one sales channel, so every smart company will continue to have their own website and sell through other channels. I don't think it will have a huge effect on Shopify."

Shopify chief platform officer Harley Finkelstein said in an e-mail, "We don't consider Amazon a competitor and it's exciting to see so much innovation and excitement in the e-commerce space."

As for Mogo, chief executive officer Dave Feller says he isn't too concerned by the early cool reception. Mogo's debut has coincided with global market volatility and concerns about the Canadian economy. Other online lenders that have gone public recently, including LendingClub Corp. and On Deck Capital Inc., have also also seen their shares sell off. "We are really focused on execution [and] in the short term, we don't think the stock price really matters that much," Mr. Feller said.

He added that the market has yet to appreciate just how disruptive "fin-tech" companies will be, and likens Mogo to Netflix when it was starting to displace Blockbuster. "We think in the not too distant future [the lending market] will be completely different and it will be led by companies like us. Until we start getting out there and really tell the story, and until people can see how we're progressing in our business, obviously the stock will reflect that. We're talking about [building] a multibillion-dollar business opportunity here."

Cormark Securities analysts Richard Tse and Jeff Fenwick said in a report on Wednesday that they expect Mogo to double revenue this year to $46.6-million and again next year to $94.8-million, and forecast the stock to rise to $11.25 within the year: "We are excited by Mogo's growth prospects," they wrote. "That said, Mogo has a significant 'to-do list' in front of it to realize its vision." 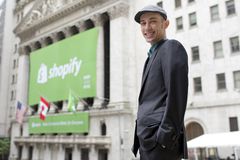 Flocking to high-flying Shopify may just be wishful thinking
May 29, 2015 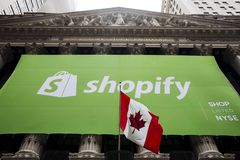 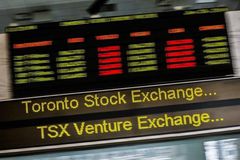