The TSX Venture Exchange is rebuilding from the ground up.

New managing director Brady Fletcher's top priority is ensuring that Canada's go-to market for small-cap companies, including junior energy and mining players, has a support system that can weather the next storm.

Commodity prices are recovering, but the junior exchange was hurt by the prolonged rout. As mining deals dried up, smaller dealers that cater to the junior resource space were forced to cut costs or close up shop. Regulations for issuers and brokers have also become stiffer and more costly over the years.

Investors, on the other hand, have retreated to securities perceived to be less risky, often turning to funds that are tied to big indexes. Meanwhile, small public companies are feeling the pinch of what they see as high listing fees and low liquidity in their shares.

Mr. Fletcher, who joined TSXV-parent company TMX Group Ltd. in October, has had a front row seat to these changes over the last dozen years; first as an investment banker and later as a venture capitalist and an entrepreneur. He says it's clear the exchange hasn't evolved at the same pace as other participants, adding that real change will require novel thinking and some patience.

"We need to structurally adapt how the Venture market works," he said during a phone interview on Wednesday. "We're actively looking at a number of changes to the core foundation that could more closely align with Venture issuers and get them that better chance of success when they do get listed with us."

Such a process has been the works since late 2015, when the TMX first embarked on its plans to revitalize the TSXV. In early 2016, John McCoach, Mr. Fletcher's predecessor who retired at the end of last year, and Nick Thadaney, the president of global equity capital markets at the TMX, hosted town halls in major cities across Canada to solicit feedback from market participants. Months later, the Venture said that a turnaround should involve trying to reduce costs, expand their investor base and diversify their equity listings.

But remaking an existing exchange with 1,642 listings – close to 70 per cent of which is mining and oil and gas companies – is easier said than done. Mr. Fletcher says it's too soon to talk about the large structural changes under consideration.

Other than lowering fees, the main way the TMX can help issuers save money is becoming more efficient. For instance, the exchange is trying to streamline the process for so-called Personal Information Forms, which have to be filled out by certain people, such as an issuer's officers, directors and large investors. But change takes time. It will take six months before the TMX gets the green light to amend the form in a big way, Mr. Fletcher says.

He's also trying to figure out new ways for promising small-cap stocks to get more exposure on Bay Street. To diversify its issuer base, the TSXV is aiming to become the financial centre of the universe for tech startups in the same way Toronto is now known for resources.

In the meantime, Mr. Fletcher is looking to highlight the good: there are companies that have raised money through a listing on the TSXV and watched their share prices soar, while others have graduated their listing to the more senior Toronto Stock Exchange.

Penny stock dynaCERT Inc., a clean tech company that aims to reduce emissions, saw its shares increase by more than 550 per cent in 2016, a jump that earned the Toronto-based company top spot in the TSX Venture 50 rankings, which were published Thursday.

"We've got the tailwinds behind us," Mr. Fletcher added. 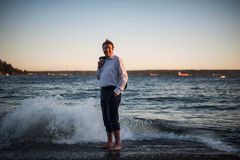