Few deals generate as much buzz as big initial public offerings. After taking a hard look at their returns, it's tough to explain why.

Between 2010 and 2014, Canadian exchanges saw 243 IPOs with a collective value of $15.5-billion, according to a PricewaterhouseCoopers LLP report issued Wednesday. Yet very few among the largest have really delivered for investors. Analyzing the three largest deals in each of the five years since 2010, only four have managed double-digit returns.

Of the 15 biggest deals, eight of them – that's more than half – have posted negative share returns since the time they went public. Even worse, the average return for all 15 of them is negative 28 per cent, despite the S&P/TSX Composite index sitting not far from its all-time high.

Some of the largest deals have exhibited jaw-dropping losses. Athabasca Oil Ltd. and Smart Technologies Inc. are each down more than 85 per cent since their respective market debuts.

The rough returns throw into question the wisdom of investing in such high profile, wildly hyped deals. The size of Athabasca's IPO, for instance, was nearly double what the company initially targeted because of such heavy demand. However, large IPO returns have mostly been lacklustre.

While good money can be made from investing in such deals – Gibson Energy Inc. is up 61 per cent since it went public; Hudson's Bay Co. has gained 40 per cent, much of it in the past three months; and CT REIT, which holds Canadian Tire real estate, is up 29 per cent – the odds of investors faring well in these big offerings are not good.

Many of the poor performers come from the energy sector, which has suffered severely since oil and gas prices plummeted this past fall. The drop has not only hit the shares of companies involved in large deals, but also a good chunk of the entire IPO market, because energy deals have dominated since 2010.

Although the number of energy IPOs in that five-year period has been relatively modest, at 28, their value is huge, at $7.8-billion. That total accounts for more than 50 per cent of the gross value of deals during the period, according to PwC. By comparison, the real estate sector accounted for 18 per cent of all deals, while mining contributed just 11 per cent of total IPO value.

Among the recent crop of energy IPOs, it may be too soon to judge. The three largest IPOs of 2014 – PrairieSky, Seven Generations Energy Ltd. and Northern Blizzard Resources Inc. – have all been affected by the recent slump in energy prices. If the oil and gas market rebounds over the next year, these stocks will likely recover some, if not all, of their losses. 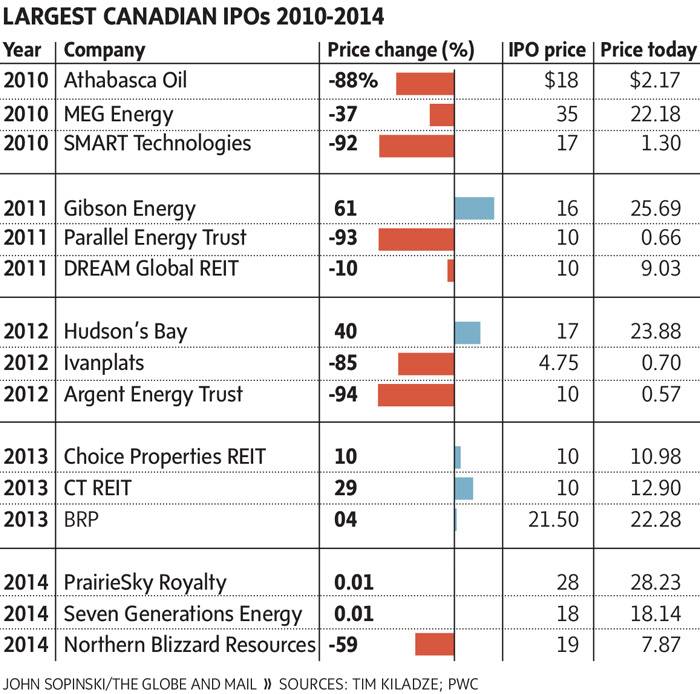