A mini-feud has broken out between the chief executives of two of Canada's stock exchanges. One runs the incumbent market leader that's been around forever. The other heads an upstart that's only been on the scene for a few months.

On Aug. 14, Jos Schmitt, CEO of Aequitas Innovations Inc. (the upstart), appeared on Business News Network (BNN) and blamed TMX Group Ltd. (the incumbent) for a "liquidity crunch" in Canada, claiming that there are thousands of securities on TMX's exchanges "that are barely experiencing any liquidity," with volume concentrated in only about 250 securities.

Mr. Schmitt also, somewhat cheekily, issued a number of "challenges" to TMX CEO Lou Eccleston to demonstrate his firm "is not just a technology company, but an exchange," including reducing "exorbitant" market trading data fees and cutting stock listing fees, which are so high that they are "keeping people away."

When The Globe and Mail talked to Mr. Eccleston this week he seemed vexed that Mr. Schmitt had chosen a public venue to air his grievances, and wondered about the wisdom of criticizing a competitor on television, instead of talking up his own shop.

"I'm puzzled. Honestly, I really am. I don't understand it. I don't know why I would accept a challenge from a competitor," Mr. Eccleston said. "I don't know where his role became challenging Lou Eccleston."

Mr. Schmitt's criticisms are, of course, tactical. If Aequitas can successfully paint the TMX as monopolistic, tone deaf and greedy, then it has a chance of coming off as the benevolent and caring competitor. But at its core, Aequitas's objectives are no different than TMX's. It wants to build a business and make pots of money for its investors.

In person, the two CEOs are a study in contrast. Mr. Schmitt is a trim European with a heavy Dutch accent. Mr. Eccleston is a burly American with a slight New York drawl. Mr. Schmitt comes across as uber-relaxed (on BNN he was sitting slightly back with his legs crossed). Mr. Eccleston projects more of no-nonsense air.

Both gents have solid credentials. Mr. Schmitt is best known for giving TMX a run for its money during his tenure as head of Alpha Trading Systems. From 2008 through 2012 the alternative trading platform scooped up about 20 per cent market share in trading. Alpha was eventually acquired by the TMX. Mr. Eccleston, meanwhile, built a reputation as a financial data and technology wizard, working in a series of senior roles at Bloomberg LP, Thomson Financial and most recently S&P Capital IQ. He joined the TMX in November.

While not directly accepting the public challenge from Mr. Schmitt, Mr. Eccleston soundly defended his company against some of the criticisms levelled his way. Its stock trading data fees are in line with its global competitors, he said. TMX's real time data packages start at $6 a month for retail investors. Aequitas is currently offering comparable data for free, but it is expected to start charging if the company can build up material market share.

Mr. Eccleston didn't address Mr. Schmitt's barb on stock listing fees, but BNN anchor Frances Horodelski practically laughed him out of town when he suggested that Hydro One Inc. could save a million dollars by listing its stock on Aequitas, instead of the Toronto Stock Exchange.

"But nobody would see it," Ms. Horodelski said. "Most people don't look at Aequitas."

While it's still early days (Aequitas launched in March), Mr. Schmitt conceded that the fledgling exchange has its work cut out for it. Aequitas only has about about 3-per-cent market share in equity trading, and hasn't had a single company list on its exchange yet. TMX's exchanges have over 70-per-cent market share in trading, a monopoly on new listings and it is benefiting from a banner year in new initial public offerings (IPOs).

On one major point, Mr. Eccleston agreed – at least partially – with Mr. Schmitt: The lack of liquidity in some securities on the TSX Venture Exchange. Mr. Eccleston acknowledged that the criteria for listing companies is something the company is reviewing, and said a complete overhaul of the junior exchange may be coming.

"Should there be a venue more around trading versus capital? Those are all legitimate things to look at," he said. 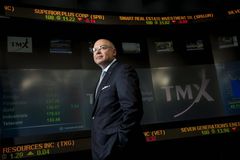 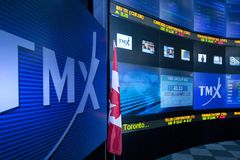 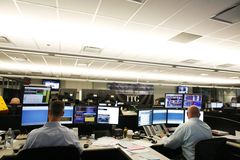