Corporate buyers have two easy ways to raise funds for a takeover: they can borrow money, or sell shares. Hudson's Bay Co. is proud to say it is doing neither.

Though the retailer has secured $4-billion in funding commitments from a syndicate of lenders that includes RBC Dominion Securities and Scotia Capital to finance its purchase of Galeria Holding, parent of department store chain Kaufhof, it would rather not tap that credit line.

"We don't intend to utilize the large majority of this financing," HBC chief executive officer Jerry Storch said on a conference call Monday. Instead, the funding commitment is there as a backstop to prove that HBC can afford the hefty price tag.

So how will the retailer get the money then?

The short answer is that a good chunk of it will come from selling Kaufhof properties to a joint venture in exchange for cash up front. After the deal closes, HBC/Kaufhof will then pay rent to the joint venture.

But it's more complicated than that, because HBC is the joint venture's majority owner. Instead of taking on billions in bank loans directly, the retailer is using this subsidiary company, which has Simon Property Group as a co-investor, to take on debt. The joint venture has pledged to take on a $1.4-billion real estate loan secured by the Kaufhof properties.

(Simon Property Group has also agreed to kick in $220-m illion. Exact details of the total contribution from the joint venture are still being negotiated, but it is expected to cover the balance of the acquisition's price tag.)

On top of that, the joint venture is taking out new mortgages on Saks and Lord & Taylor properties it already purchased from HBC in February. This form of debt is expected to total $350-million (U.S.)

Because the mortgage and real estate loan details are still being finessed, HBC isn't sure of how much money the joint venture will have at its disposal. For that reason, the retailer has agreed to borrow up to $600-million (U.S.) from banks who offered up the original funding commitments. (Simon Property Group has also agreed to kick in $220-million (Canadian).

Seeing as how this is the only corporate debt being added as part of this takeover, HBC argues that it is only adding "incremental debt" to finance the deal. Looking at the transaction more closely, though, there's a case to be made that this isn't true. The joint venture sits directly on HBC's balance sheet, and while it isn't taking on traditional corporate debt, it's adding new real estate loans and mortgages. Debt is debt.

However, the retailer uses what is known as the "equity method" of accounting for its joint ventures, which means the subsidiary appears solely as a single line item on its balance sheet. This disclosure shows nothing more than the venture's equity value – total property value less debt – in some ways masking how much new debt is being added.

That can seem like financial engineering to some. However, Richard Baker, executive chairman of HBC, plans to tackle this problem in the long run. Although the joint venture now sits on his balance sheet, he hopes to eventually take it public, likely as a real estate investment trust. Doing so would hive off the real estate/mortgage debt into a separate company.

When the joint venture was first set up in February, the plan was to take it public in three to five years. Following the Kaufhof deal, it seems like that timeline could be shorter. "The addition of these properties into the real estate company give us greater quality, greater diversity, and certainly make it easier to do an IPO whenever we think it's an appropriate time to do it," Mr. Baker said on the conference call.

HBC is using Bank of America Merrill Lynch as exclusive financial adviser in its purchase of Galeria Holding. 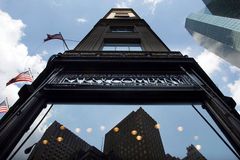 For HBC shareholders, a risky move in Germany Subscriber content
May 15, 2018 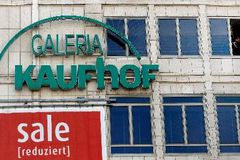