The sale of Iron Ore Co. of Canada, put in play by majority shareholder Rio Tinto, may also lead to bids for one of Canada's sleepier companies, where an activist is seeking to wake up some value.

Rio Tinto owns 59 per cent of IOC and is looking for buyers. That raises the stakes for Labrador Iron Ore Royalty Corp., which owns 18 per cent of IOC.

Labrador Iron Ore also gets a 7 per cent royalty on all the ore shipped by IOC.

Now investor Waratah Advisors, a Toronto hedge fund, sent a letter to the board of Labrador Iron Ore, saying the company should consider selling the stake in IOC.

Owning both would give a lock on control of IOC. Taking out Labrador would also end the royalty payout. That 7 per cent coming off the top line at IOC comes straight out of the pockets of other shareholders.

The pressure on Labrador Iron Ore is coming from Waratah Advisors, which has been building a stake in the company and earlier this month sent a letter to the board of the company, which was obtained by Streetwise.

Waratah only owns a small fraction of Labrador, about 1 per cent, and must be counting on other like minded shareholders to get on board.

The shareholder believes there is $80 a share of hidden value in Labrador shares that could be unlocked. The letter argues that Labrador Iron Ore "trades at a large discount to fair value due to: a confusing and inefficient corporate structure; poor allocation of capital; an unmanaged balance sheet; limited market presence in Canada and the United States; and an inactive corporate strategy."

Waratah says "that a number of simple and prudent initiatives should be undertaken by Management and the Board of Directors to unlock shareholder value and thus discharge your duty to shareholders to maximize value. In the alternative, the Board should form an independent committee to initiate a formal review of strategic alternatives."

Waratah argues that Labrador Iron Ore's shares are weighted down by the equity interest in IOC. Royalty shares have been soaring, while miners are sagging. So splitting the mining portion off from the royalty interest should set the royalty shares free to trade at a higher valuation.

"A full, partial sale or spin of the equity would return capital to shareholders and result in multiple expansion for the company as it becomes regarded as a high quality pure play royalty," Waratah states.

There is also hidden value in IOC, because of the port and railway assets that the company owns.

"Waratah believes IOC Infrastructure could be restructured as a standalone entity with a market value of $5-billion to $10-billion," which implies $15 of additional value in Labrador Iron Ore Co. shares.

There is also an opportunity to add some debt to the clean balance sheet at Labrador Iron Ore, Waratah contends. That would enable a return of capital to shareholders, and create interest payments to use to lower the company's cash tax bill.

"Modest leverage could be used to: invest and grow accretively; return capital to shareholders by way of a special dividend (3 turns on trailing cash flow would be close to $8.00 per share, or a 21 per cent return); buy back shares at a discount to net asset value resulting in accretion to cash flow on a per share basis; invest in other royalties to reduce risk by diversifying away from a single mine and commodity; and prudently manage cash taxes," the letter states. 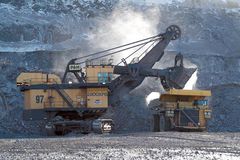