Not only is his latest CBC show titled Redemption Inc., a series that gives 10 ex-convicts a chance to set up their own business with his money, he's also been pre-occupied with redemptions of a different sort: withdrawals from his O'Leary funds.

Last week it was reported that annual redemptions from these funds hit $500-million. Mr. O'Leary is now disputing this total, citing a redemption value of $253-million instead.

The $500-million total was initially calculated by Mark McQueen at Wellington Financial. The Globe and Mail, using O'Leary Funds' annual report, came up with the same figure, but Mr. O'Leary explained these public documents are misleading.

Five of his funds, typically those with the phrase "Yield Advantaged" in their name, employ a nifty swap strategy that lowers the tax burden for investors. To do this, each is actually made up of two separate funds, meaning there are 10 funds in total. The two funds in each strategy are referred to as "top" and "bottom" funds in industry lingo, and although both have financial statements, Mr. O'Leary explained that only the redemptions from the top fund matter.

For that reason, the $99.9-million that appears to have been redeemed from the Convertible Portfolio Trust, the highest total for any fund, doesn't qualify because it is a bottom fund.

Seem confusing? That's because it is. A number of industry experts have looked through the O'Leary funds' public documents since the first redemption value was reported, and they all informed the Globe that even they can't wrap their heads around the redemptions and total assets under management. Mr. O'Leary has posted a document on the fund company's website to try to make things a bit more clear.

However, the insiders all acknowledged industry speculation that the O'Leary funds are having problems. Of the 46 different mutual and closed-end funds listed on the company's website -- a number that includes multiple series of the same funds -- only 15 of the 46 have net asset values above their $10.00 starting point. Keep in mind that these funds pay distributions, so their total return is likely higher. The Canadian Income Opportunities Fund 2, for instance, has a net asset value of $10.0254, but after adding in distributions its NAV jumps to $11.3261. But on the other hand, the funds charge management fees that eat into these returns.

Still, the general consensus is that redemptions of $253-million is still a big number for a firm with total assets under management of around $1.1-billion.

Mr. O'Leary doesn't think so. "We've had our lumps just like anybody else," he said in an interview, noting that many mutual funds have experienced outflows as investors pile into income and balanced funds. However, he failed to acknowledge that his funds, which are dividend-and-yield heavy, are precisely the kinds of funds that investors have been flocking to.

However, he did not deny that a number of employees have left the firm in the past few months.

Mr. O'Leary chalks this up to high turnover in any startup, rather than anything to do with the performance of his funds.

"I've been involved in many entrepreneurial startups, and that's really what O'Leary funds is," he said. "Generally after six or seven years, you only find a third of the original founders originally there. That's the nature of growing a business."

Editor's note: This article has been updated to clarify that the $500-million redemption figure is not correct. 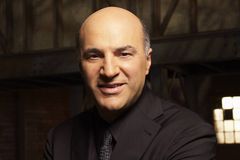