Lexpert Roundup on the Business of Law

Lexpert identifies and reports on emerging business issues and practice areas in the business of law. Whether online, in our magazine or in the DealsWire e-newsletter, we chronicle deals and lawsuits of interest, and cover issues of broad concern to the legal profession and those who purchase legal services. We hope you enjoy this sample of our latest content.

In our closed deals section, we look at Hudson's Bay acquiring the parent company of German department store chain Galeria Kaufhof, as well as the sale of Fortis Properties Corp.'s commercial properties in Atlantic Canada to Slate Office REIT.

We also look at the players behind Transeastern Power Trust acquiring two solar power projects in Romania. The photovoltaic plants are located in southern Romania close to the Danube River.

Since the financial crisis, there's been a definite trend in both Canada and the U.S. toward upfront negotiation of acquisition finance terms that were traditionally reserved for the definitive documentation stage. But the trend has been decidedly less pronounced in Canada presently than it is in the U.S.

Which deals are most likely to be aborted?

Announced deals don't always close, but an analysis of transactions in 2014 reveals that tech and telecom deals are far more likely to fall through. Media and entertainment deals, meanwhile, are surprisingly sturdy by comparison. Check out our graphic for a complete rundown.

Twin decisions emanating from the Supreme Court of Canada have given regulators the authority to reject collectively bargained labour costs when they come in conflict with the public interest. For consumers, the message is upbeat. But for those providing regulated services, the future of rate-setting is now fraught with new uncertainties.

After many years of scant action when it comes to combatting corruption by Canadian companies conducting business on the international stage, the federal government introduced tough new regulations. The most contentious initiative, which has been referred to as draconian in many quarters, calls for an automatic 10-year debarment from doing business with the federal government for any entity convicted of bribery, money laundering and extortion and other offences.

If the high-profile $12.5-billion merger of Tim Hortons and Burger King in December, 2014, proved one thing, it's that the food and beverage industry is no longer under the radar of the business and legal communities' corporate law and mergers and acquisitions consciousness. But Canada's massive food and agriculture industry is becoming more complicated with the increase of regulation and expanded licensing requirements.

Lexpert published its special edition on Litigation in within the December edition of The Globe and Mail's Report on Business magazine. The Lexpert Special Edition - Canada's Leading Litigation Lawyers profiles Lexpert-ranked lawyers in several areas of business-related litigation. Also included are feature articles on the latest developments in commercial and securities litigation, arbitration and alternative dispute resolution. It features articles on the following topics:

The Competition Bureau has a new mantra and approach.

Damage caps and other restrictions for shareholder class actions appear to have worked. Whether that is a good thing depends who you ask.

The Alternative to Litigating

Deciding whether to arbitrate or litigate is not always a simple determination.

Canada is slowly shedding its image of being soft on fraud and white-collar crime.

Bracing for the Breach

Data breaches are becoming inevitable. In the current environment, moreover, it's likely that a material data breach today will be followed by one or both of the following types of litigation being brought against your organization. Steps can be taken to mitigate legal exposure, writes McCarthy Tétrault's George Takach in his legal tech column.

Just as Canadian legal regulators are finally figuring out that they need to regulate "entities" and not just lawyers, along comes Law Scout, which describes itself as "all about connecting businesses with great lawyers at upfront, fixed fees. ... We do not provide or participate in any legal representation." Uberlawyer, anyone? Paul Paton explores in this month's Last Word column.

The End of Full-Service

In her legal marketing column, business development coach Heather Suttie writes that law firms can no longer be all things to all clients. As full-service firms face competitive pressure from all sides, the only options remaining may be to specialize … or perish. 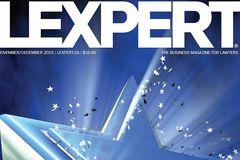 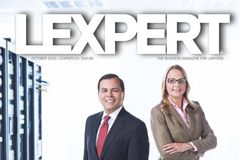