Trading desks have a name for stocks like Valeant Pharmaceuticals International Inc: They call them hedge-fund hotels. And to mangle a line from the Eagles, at a hedge-fund hotel, you can check out any time you like, but it sure hurts to leave.

In good times, go-go stocks such as the Laval-based drug company attract an evangelical following from the hot-money crowd, with the likes of Bill Ackman at Pershing Square Capital Management using every opportunity to preach the gospel according to Valeant.

In bad times, when Mr. Ackman loses faith and takes a $4-billion hit on his misadventure, long-suffering Valeant shareholders get another kick in the teeth.

Valeant dropped another 10 per cent Tuesday to an all-time low on news that Mr. Ackman had given up on the company. The overall fall from grace at Valeant is stunning: Shares have plummeted from $335 in 2015 to close Tuesday on the TSX at an all-time low of $14.59.

At least one investor who has been around a while is growing increasingly leery of hedge-fund-hotel-type stocks and the forces that create them.

Over a recent lunch, fund manager Ira Gluskin waved his fork in my direction and asked just who we were talking about at The Globe and Mail when we used the words "momentum investor," a term employed frequently in describing Valeant's backers. My response: We were mainly talking about hedge funds.

Mr. Gluskin, co-founder of Gluskin Sheff + Associates Inc. and a student of markets for five decades, had a different definition. He argued momentum investors make up an increasingly large segment of the institutional community, a group that ropes in a portion of the hedge fund crowd, but also includes a big chunk of traditional equity investors such as mutual funds that are desperate to post strong short-term performance, even if that means abandoning their faith in fundamentals.

Then there are all the do-it-yourself individuals who buy and sell based on what they're told the pros are doing. There is a cottage industry tracking the holdings of hedge funds and big-name investors such as Berkshire Hathaway Inc. and getting this information to the retail crowd. These investors will always be a step behind the institutions, but they are moving in and out of the same stocks.

Add it all up, and Mr. Gluskin's view is that the hot-money crowd is far larger than it's ever been in the past, with investors of all stripes devoting a significant portion of their portfolio to a simple theme: Buy a stock because its price is going up, dump the holding because the price is going down. That's who hangs out at the hedge-fund hotels.

The theory that momentum is a dominant investment theme explains the volatility that comes with widely followed stocks, such as Facebook Inc., currently the favourite holding of hedge funds, Apple Inc., which held that title last year, and a handful of fellow high-fliers such as Amazon.com Inc. and Google parent Alphabet Inc.

This outlook also explains why, during a bull-market run such as the one we've seen since the U.S. election, rising stock prices become the only justification needed to commit more capital to equities.

But the Valeant experience shows the other side of momentum investing. When the stock is going up, fundamentals are forgotten, and a flawed growth strategy based on acquiring rivals and jacking up prices for their products is forgiven.

And as Valeant investors learned on Tuesday, when there's a rush to check out of a hedge-fund hotel, there's not a lineup at the front desk. There's carnage in the stock price.

The ‘New Valeant’ looks an awful lot like the old one 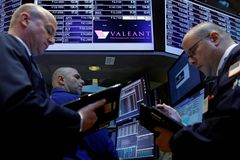