The almost 50 per cent plunge in the price of crude oil since mid-June 2014 has wreaked havoc on many parts of the Canadian economy. But according to a recent survey by the Canadian Venture Capital and Private Equity Association (CVCA) the industry is taking a "bring it on" approach to the collapse in the commodity. Beaten down asset values appear to be spurring a swath of investor interest from the private equity industry.

Of the 64 Canadian private equity firms surveyed, 61 per cent said that depressed oil prices have "improved their business outlook."

The expected bump in activity isn't expected to be purely Canadian-driven.

2015 will also be a big year in terms of attracting investment from big U.S. private equity firms in oil patch assets, Mike Woollatt, chief executive of CVCA said in a telephone interview.

The American buyout shops have the added bonus of the increased buying power the greenback currently affords against our loonie. That beaten up oil asset that U.S. private equity firms might have been eying back in the summer is 15 per cent cheaper solely based on the falling value of the Canadian dollar.

Since the start of the year, there has already been an uptick in interest from private equity companies in Canadian oil assets. Last month, Calgary energy investor Paul Charron raised funds from U.S. private equity firms, Riverstone Holdings LLC and NGP Energy Capital Management, with the objective of investing in deep value oil patch assets.

In Jan. U.S. alternative asset manager, Apollo Global Management LLC started a fund that will target the energy sector. A spokesperson with Apollo would not elaborate on whether the fund would be specifically targeting Canadian energy assets.

"Energy is a cyclical business and it doesn't always make sense for an energy business to be a public business. So it makes sense that it [private equity buyouts] will continue," he said, adding that obvious buyout candidates include Connacher Oil and Gas Ltd., Lightstream Resources Ltd., and Canadian Oil Sands Ltd.

"The private capital industry is very opportunistic. They think very long-term by definition. If you believe that oil and gas is a good buy long term, then at current valuations there's likely lots of opportunity," said Mr. Woollatt.

He says a typical private equity energy fund has a 10-year investment horizon, which gives investors plenty of breathing room to wait out a dip. "They're in it for the long-haul," he says, unlike many investors in the public markets who have a lot less patience and a much shorter time frame.

"There is a gusher of new interest in the oil and gas sector." said Rosemary Batt, professor at Cornell University and co-author of Private Equity at Work: When Wall Street Manages Main Street.

She points out that, while energy had fallen out of favour for a while (partly due to the unwillingness of private equity shops to allow themselves to be subject to the vagaries and volatility of a commodity), it wasn't always that way. One of the largest ever deals in private equity was in energy – the $45-billion (U.S.) buyout of U.S. energy company Texas Utility Corp. in 2007. It also became a cautionary tale; that deal ended up being "one of the biggest busts ever," Ms. Batt added. The company, renamed Energy Future Holdings Corp., went into bankruptcy protection last year.

Last year was the biggest year on record for the Canadian private equity industry, according to the CVCA report. Just a smidge over $41-billion was invested in Canadian companies by global private equity investors. That was about 4 times more than in 2013, and about $7-billion more than the previous record, which was set in 2007, "the year of the LBO" when $33-billion was funnelled in.

The biggest individual sector in 2014 was energy and power which accounted for $13-billion of investment, and a good chunk of that came in the fourth quarter, months after the oil price started sliding said Mr. Woollatt.

"There were a lot of deals done in Q4 in the energy sector," he said, including Encana Corp selling gas pipeline and processing assets in Western Canada's Montney region to Veresen Inc. and KKR for $412-million in December. 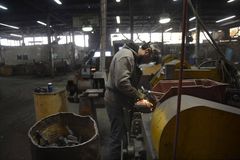 Suncor bets on cooling Alberta market to push ahead with Fort Hills
February 5, 2015 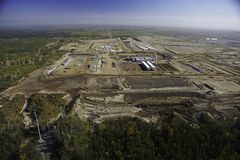