The collapse of a major U.S. gold miner has ensnared Bank of Nova Scotia, putting the Canadian lender at risk of losing $73-million, if not more.

Plagued by years of negative cash flows, troubled bullion producer Allied Nevada Gold Corp. filed for creditor protection in Delaware on March 10 – a major blow to a company worth more than $5-billion as recently as 2012.

As usual, the filing immediately raised questions about the losses the company's bondholders, which include CI Financial Corp., will endure. What's largely gone unnoticed, however, is that Scotiabank also risks losing a large sum of money.

As of early February, the lender's potential loss from a swap agreement signed with Allied Nevada in 2012 amounted to $73-million. Changes to the Canadian dollar's value relative to the U.S. currency, as well as the moving differential between the two countries' government bond yields, keeps altering this exposure. By one calculation, Scotiabank was at risk of losing as much as $90-million since this date.

Because the restructuring process is still in its infancy, it is too early to tell how much money Scotiabank will ultimately lose. Should Allied Nevada successfully revamp its balance sheet, and its adviser Moelis & Co. successfully negotiate with its creditors, the Canadian lender may walk away unharmed.

Scotiabank's fortunes are also tied to its ultimate ranking among bondholders following the restructuring – the higher it ranks, the better its claims on Allied Nevada's assets. It could take a protracted courtroom battle to determine this hierarchy. Shareholders may also need to approve the proposed restructuring.

In this case, Scotiabank and other creditors have already put forward a proposed agreement that would see the Canadian lender rank senior to the unsecured high yield note holders after the restructuring – Scotiabank would get first lien notes, and the noteholders would get common equity. If approved by a judge, it will be up to shareholders to form a committee and to contest the agreement, should they take issue with the restructuring plans.

The proposed agreement would also ensure that Scotiabank ranks senior to the new debtor-in-possession financing that would provide funding to Allied Nevada during the restructuring process.

Even though Scotiabank may walk away with no material losses, the scenario has raised eyebrows on Bay Street because it is one of the few high profile cases that stem from a corporate swap exposure. The downfall of Canwest Global Communications Corp. is one of the few comparable transactions.

Scotiabank's bruising exposure dates back to 2012, when Allied Nevada sold $400-million worth of seven-year high yield debt that paid an 8.375 per cent annual coupon. When the deal closed, the miner entered into an agreement with Scotiabank that effectively 'swapped' its Canadian dollar proceeds for U.S. dollars.

Since then, two key factors have become substantial dangers for the bank. In the foreign exchange market, the loonie has depreciated heavily relative to the U.S. dollar, which makes Scotiabank subject to currency risk. Allied Nevada's fortunes have also deteriorated, because the miner hasn't been able to profit from developing its sulphide ore deposits.

Ironically, the swap agreement with Scotiabank contributed to the pressure on Allied Nevada. The miner had agreed to collateralize the swap as the market moved, which means it had to deposit cash with the swap counterparties to protect against any losses. Already hurting for liquid assets because its cost structure was too high, Allied Nevada had to dig deep into its pockets to support the derivative.

As the restructuring process unfolds, some key questions must be answered. Right now Scotiabank seems to be subject to market moves, which means that if the U.S. dollar keeps appreciating relative to the loonie, its potential losses will grow. At some point the bank may opt to write down its existing exposure, instead of riding the situation out.

Scotiabank must also establish where it ranks relative to the bondholders who bought the high yield debt in 2012, including CI, Mudrick Capital Management, and Third Avenue Management.

The bank could arguably have hedged some of its exposure to Allied Nevada. Typically the easiest way to do so involves buying credit default swaps from a party not involved in the deal, serving as insurance should the company in question file for bankruptcy protection. However, these swaps do not exist for Allied Nevada. Scotiabank did not respond to requests for comment.

National Bank of Canada and Societe Generale are also exposed to the swap, but their potential paper losses are small relative to Scotiabank's, worth $12-million and $9.7-million respectively, as of February 5. A source familiar with the negotiations said the collateral Allied Nevada has already posted will likely cover these exposures. 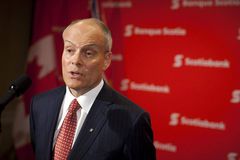 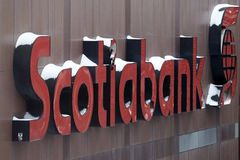