Jeff Gans, vice-president of Private Wealth Management at TD Wealth, will be leaving the firm as of Feb. 9. Mr. Gans joined the bank in 2012.

Prior to his current role, Mr. Gans was the head of TD Wealth Private Investment Advice, where he was responsible for managing approximately 1,100 investment advisers.

TD has not yet announced a replacement for Mr. Gans. A TD spokesperson confirmed the bank has "an executive search already under way and expects to announce his replacement shortly."

Prior to his time at TD, Mr. Gans spent over eight years with U.S-based Ameriprise Financial Service Inc., a financial planning firm where he was responsible for adviser acquisitions and business development.

Later this month, Mr. Gans will join Purpose Investments as CEO of the Purpose Advisor Solutions business – a new subsidiary for the ETF provider.

Earlier this week, Purpose Investments, along with OMERS venture, announced the launch of an Ethereum-focused public company. Mr. Seif, president and CEO of Purpose, will be chairman and co-chief investment officer of Ethereum Capital, which is aiming to raise $50-million from investors. 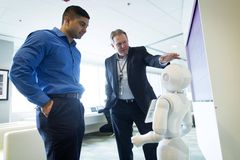